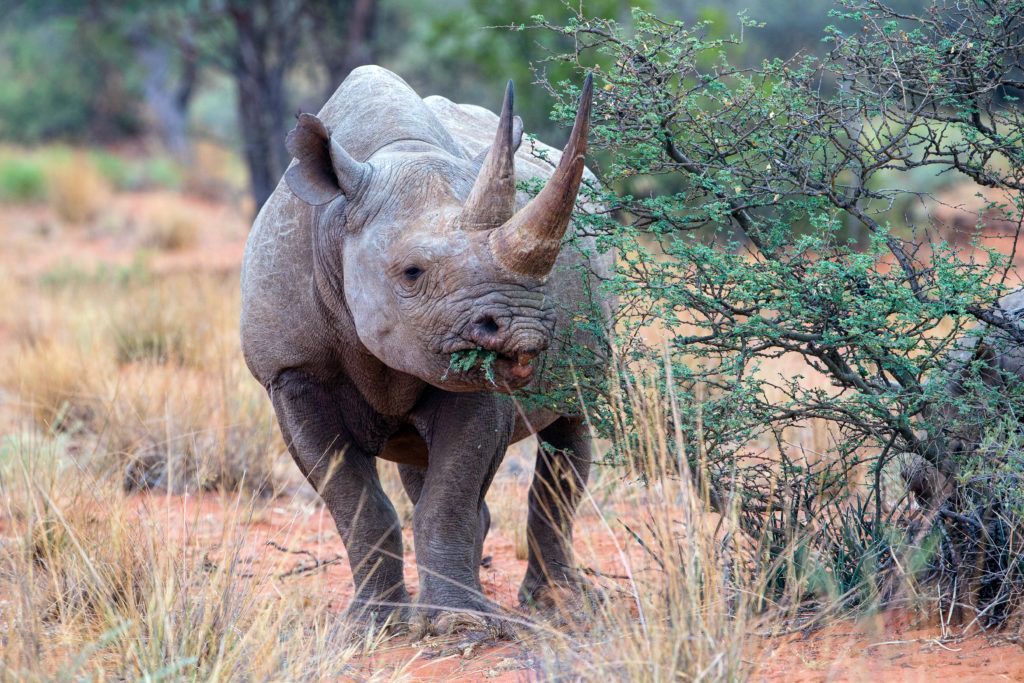 A black rhino female and her offspring stand under the shade of a cluster of acacia trees in the vicinity of ‘Rhino Hill’, a place uninhabited by rhino for more than 60 years. She has led her calf on an unprecedented trek of over 320km to get there, seeking refuge in a region she hopes will be safe for her and her youngster.

Once a place known for its high densities of rhino, with populations numbering at 100,000, today there are less than 5,500 black rhinos left—the African black rhino population was decimated as a result of the poaching crisis that blazed through Africa from the 1960’s through to the 1980’s.

During the early 1990’s, protection levels for rhino increased and the trade in rhino horn was controlled, enabling the population of black rhino to start reviving itself. Doubling their numbers over a 20-year period their population has once again been put under poaching pressure for a renewed trade in rhino horn. Unfortunately, it is still not safe for her to be near Rhino Hill where her ancestors roamed.

In the last 10 years alone, we have lost more than 7,000 rhino to poachers in Africa, with rhino horn obtaining record prices on the black markets. This is due to a renewed interest in rhino horn driven by increasing middle income wealth in Asia allowing people to purchase luxury and status items. Regrettably, political will is severely lacking in Africa to combat the poaching crisis, and the syndicates involved in coordinating poaching either walk out with no bail and or are given meager sentences in the South African courts, yet the underprivileged poachers they bribe into doing their dirty work run a death gauntlet in the parks to get their hands on rhino horn. The level of immorality extends to attacks on rhino orphanages – it seems nothing is sacred in this battle for rhino horn. Then in April this year the South African government re-opened the domestic trade in rhino horn, a move that sparked great debate amongst conservationists around the role it may cause in enabling new loop-holes to be exploited by illegal horn smugglers.

It is in this climate that we have experienced a two-fold increase in poaching within the KwaZulu-Natal (KZN) province of South Africa since last year; a previous conservation ‘stronghold’ of rhino with the most genetically diverse white rhino population. This makes it all the more critical to work toward securing the future of this population of rhino. Project Rhino is an association that includes members from the provincial conservation authority, Ezemvelo KZN Wildlife, through to local NGO’s, community and private rhino owners and other interested parties with the aim of providing support to protected areas with rhino. Whilst the key focus is on stopping rhino poaching, the association is very aware that the plight of South Africa’s rhino are just the tip of the iceberg and indicative of the threat to all endangered species, and so all its efforts are made with a wider mandate to ‘Stop Wildlife Crime’ in general.

This includes continuing to provide field rangers with the correct training and equipment to enable them to be more effective in the field, protecting rhino and intercepting poachers; identifying security gaps and provide advice to conservation managers on how to close up these gaps; ensuring effective communication between security teams; ensuring continual aerial surveillance and responses to protected areas; providing children living around the parks with opportunities to spend time within the parks so as to develop a meaningful and positive relationship with wildlife; lobby our government for increased political will and to develop dedicated wildlife courts where poachers can be trialed effectively.

As an added rhino security measure, Project Rhino has decided to develop a much needed K-9 Unit that will serve two functions, namely tracking and detection for reserve management and law enforcement units in the region. Working as a support unit to the Game Reserves and compliance teams in the area, the Project Rhino K9 Unit aims to assist in curbing wildlife crime in the region, specifically crimes involving rhino. Due to their superior sense of smell, hearing, and unique physical capabilities, trained dogs are a valuable supplement to law enforcement manpower.  The detection dog team will be highly effective in searching suspects, crime scenes, buildings, vehicles, and outdoor locations, reducing the time it takes to conduct a search. The trained and certified tracking dogs will assist in tracking and locating poaching suspects in the shortest possible time.

Do you want to help us protect one of the last strongholds and the only place on the planet that has always had black and white rhino roaming together? Make a donation toward our Project Rhino K9 Unit.

Your donation will enable us to establish this much-needed unit through the training of the three dogs and their handlers, the development of the dog housing facility, and the related equipment to ensure for their proper care and well-being, along with a support system to ensure their optimal deployment into the field. www.wildnet.org/rhino