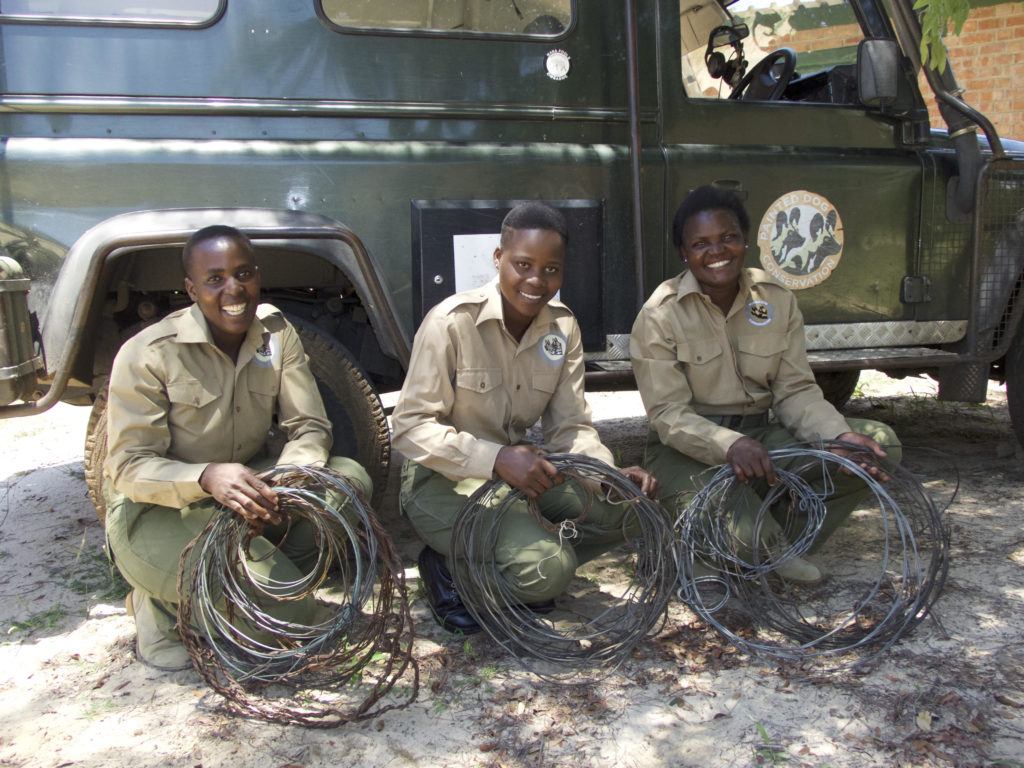 The signs are subtle, but Belinda Ncube knows what to look for. A branch that’s been intentionally broken, a shoeprint faint, but still visible in the dirt; these could indicate a snare was set nearby. This is what Belinda has been trained for, why she spends all day patrolling miles of forest in Zimbabwe’s scorching heat. As one of Painted Dog Conservation’s (PDC) anti-poaching rangers, Belinda combs the mosaic of thick forest bordering Hwange National Park hoping to rid them of wire snares, the single biggest threat to painted dogs. It’s tiring work, physically and emotionally, but she has been preparing for it since childhood.

At 11 years old, Belinda participated in PDC’s week-long children’s Bush Camp where she first connected with her country’s spectacular wildlife and grasped the importance of conservation. On one of her walks home from camp she found an ill-fated kudu (antelope) entangled in a snare. The animal was relatively unharmed, it could live if released from the metal wire tightly gripping its leg. Belinda ran home for help, convincing her parents to not only release the kudu, but to track down and arrest the poacher who set the snare. Bush Camp had made her a passionate champion for wildlife. In 2017, twelve years after the kudu rescue, Belinda returned to PDC eager to become an anti-poaching ranger.

Anti-poaching units have long been the realm of men, with their paramilitary edge and demanding physical requirements, but this year PDC hired their first three female rangers. Well received and respected by their male counterparts and their communities, these women are true trailblazers. At PDC, protecting wildlife is not men’s work or women’s work, it’s simply teamwork, and is essential as poaching escalates in the park.

In a struggling economy, more people have turned to poaching to survive; each poacher can set 20-30 snares a day, with disastrous consequences for wildlife. Painted dogs are especially susceptible to snares because they cover miles of terrain, creating more opportunities to trigger a snare. Making a bad problem worse, painted dog packs need a certain number of adults to both hunt and protect pups, so every individual dog lost to a snare endangers an entire pack. Although painted dogs are not targeted, snares do not discriminate—elephants, wildebeest, lions, even birds have all been unintended victims of snaring. Anti-poaching rangers are the lynchpin in conservation efforts to protect wildlife from these brutal devices—their efforts save thousands of animals each year. It’s tough, but rewarding work, and Belinda has no doubt she is the right woman for the job.

PDC’s anti-poaching units have collected over 31,000 snares since its first deployment of patrol units in 2001. Conservative estimates indicate that 3,100 animal lives have been saved as a result of this project to date.