In the thin alpine air, Getachew scanned the landscape, but saw no sign of an Ethiopian wolf. Despite the aid of powerful binoculars, neither Getachew nor his colleagues from Ethiopian Wolf Conservation Program (EWCP) could see past the thick fog draped across the Simien Mountains. Fortunately, the particular wolf they were searching for was wearing a GPS collar, meaning they could rely on eyes in the sky to pierce through the mountain mist. Before long, Getachew Assefa, EWCP Simien Team Leader, picked up a signal. They had located Terefe.

The story of this Ethiopian wolf began in May of this year, when Simien Mountain National Park scouts informed EWCP that they had discovered an injured wolf hiding under a bridge. After capturing the frightened two-year-old canid, the severity of his injuries became clearer: a gunshot wound and a fractured femur. While human attacks on Ethiopian wolves are rare, the nature of these injuries combined with the scarcity of Ethiopia’s remaining wolves alarmed EWCP. Getachew and his team set about providing the best veterinary care to their new patient, who they named Terefe, which means “lucky survivor” in Amharic.

Terefe’s leg heals in EWCP’s improvised enclosure in the first-ever prolonged rehabilitation of an Ethiopian wolf.

The resilience that inspired Terefe’s name proved vital on his road to recovery. In addition to his injuries, Terefe also bore the distinction of being the very first Ethiopian wolf ever kept away from his pack for a prolonged period of time while being rehabilitated by conservationists. There was much uncertainty regarding how he would handle the months-long captivity needed to heal. In a joint operation with national park managers, Getachew’s team designed an improvised enclosure for Terefe, making EWCP’s Ayenameda outpost his temporary home.

Fears that Terefe might respond poorly to captivity proved to be unfounded. Over five weeks, he remained alert and showed a survivor’s spirit. EWCP’s veterinarians noted his positive response to treatment and his mood improving. In late July, EWCP released a fully recuperated Terefe. Muktar Abute, EWCP Vet Team Leader, placed a GPS collar around his neck and Terefe was set free in his Ayenameda territory. Given Terefe’s unprecedented absence from his pack, the Simien team was unsure about how his homecoming might be received. Luckily, a week later, EWCP’s monitors spotted Terefe being greeted warmly by his packmates. 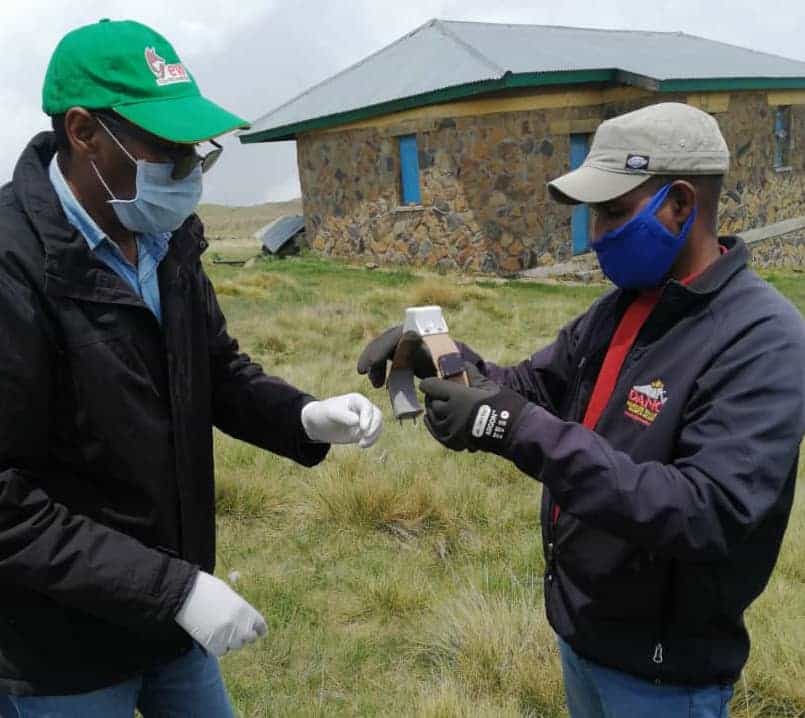 Getachew Assefa (on the right) and his colleague prepare the GPS collar to be placed on Terefe during his release.

Although his initial reintroduction to the wild was successful, EWCP soon noticed that the young wolf was traveling far outside his normal range, exploring nearby territories of other packs. To pinpoint the cause of these unusual excursions, EWCP closely followed Terefe as he wandered for weeks in the foggy Simien Mountains. Satellite tracking allows Getachew to locate Terefe via his GPS collar, and EWCP is monitoring his movements to better understand wolf behavior.

Terefe back in the wild after being released by EWCP.

Terefe’s groundbreaking rehabilitation is a powerful story of resilience. The collaborative efforts of EWCP and national park management saved this remarkable Ethiopian wolf and created a plan of action for future rescues. Getachew continues to track this lucky survivor as he explores further into uncharted territory, the start of a new journey made possible by EWCP.