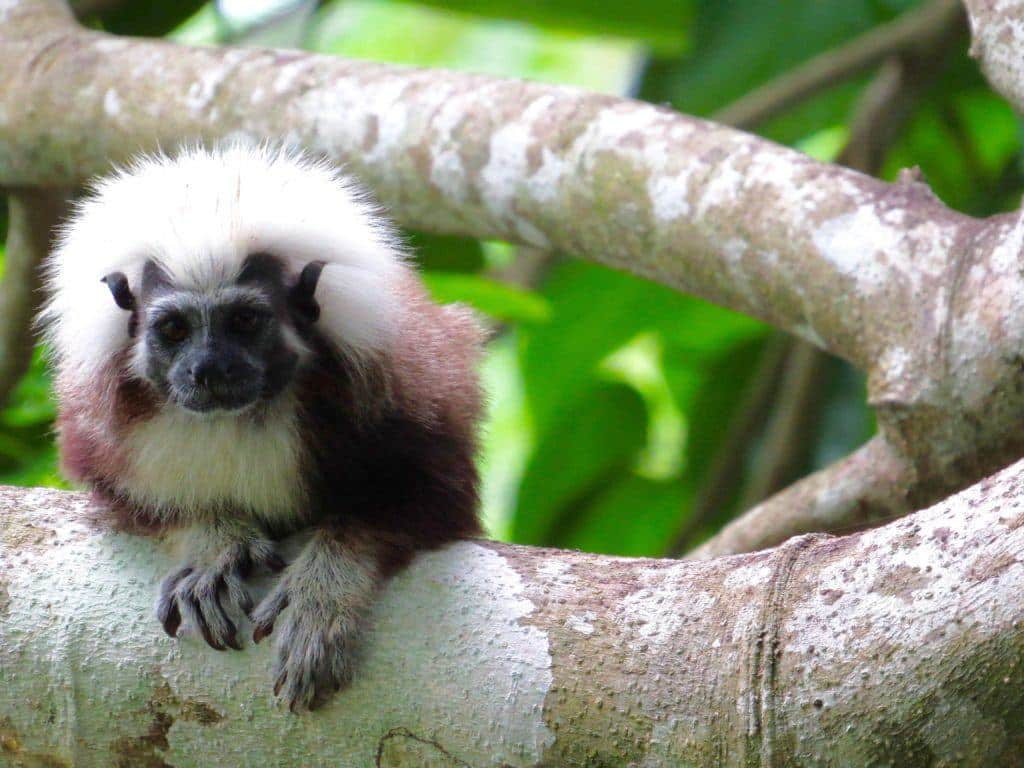 The small stones whizzed through the lush, green leaves ricocheting off of the tree bark before thudding to the ground. The boys grabbed a handful more, loaded their slingshots and fired until hitting the small cotton-top tamarin clinging to the branches above. Once it fell, the boys captured the little monkey, planning to sell it as a pet. Fortunately, two Proyecto Tití biologists spotted this scene from their truck and bee-lined to the boys intent on stopping them.  Right there in the tropical forest, these kids got an impromptu education about the special monkeys that live only in northwestern Colombia. By the time they parted ways the boys were converted from would-be poachers to enthusiastic conservationists; they released the cotton-top back to its arboreal home unharmed.

This was hardly the first cotton-top to be knocked out of a tree and captured for the pet trade. Weighing only one lb., cotton-tops are small with a shock of white cottony hair (from which they derive their name) making them cute and desirable pets. While it’s illegal to have a pet cotton-top, the law is rarely enforced and the practice is culturally accepted; as a result, the pet trade is robbing the forests of these critically endangered primates. Statistics from environmental authorities in Colombia have shown that over 200 cotton-tops have been confiscated as pets in the last five years; we can assume there are many others that have not been reported or confiscated. While deforestation is the biggest threat to cotton-tops, the pet trade is a serious concern that must be addressed. Removing cotton-tops from the forest damages the population as a whole and harms the individual animals—cotton-tops are separated from their families, heartbreaking for a creature that lives in tight knit social groups, and they typically spend their days tied up. Their diet, health, and quality of life suffer greatly.

Interestingly, the key to addressing this issue may be through another popular pet. Proyecto Tití is teaching kids to be caring and responsible dog guardians as a positive alternative to keeping wildlife as pets. With the help of professional animal trainers, Proyecto Tití helps kids create a stronger bond with their dogs through training classes.  In the process, kids learn to distinguish between domestic animals and wildlife and understand the long-term consequences of keeping wildlife as pets. Additionally, having a trained dog has been proven to reduce the desire to have a pet cotton-top. So far, the program has been remarkably successful, not only helping to reduce the number of cotton-tops captured, but in teaching communities to be good stewards of wildlife. The more kids learn how to be compassionate and attentive to their dogs at home the more they help cotton-tops stay in the forest where they belong.