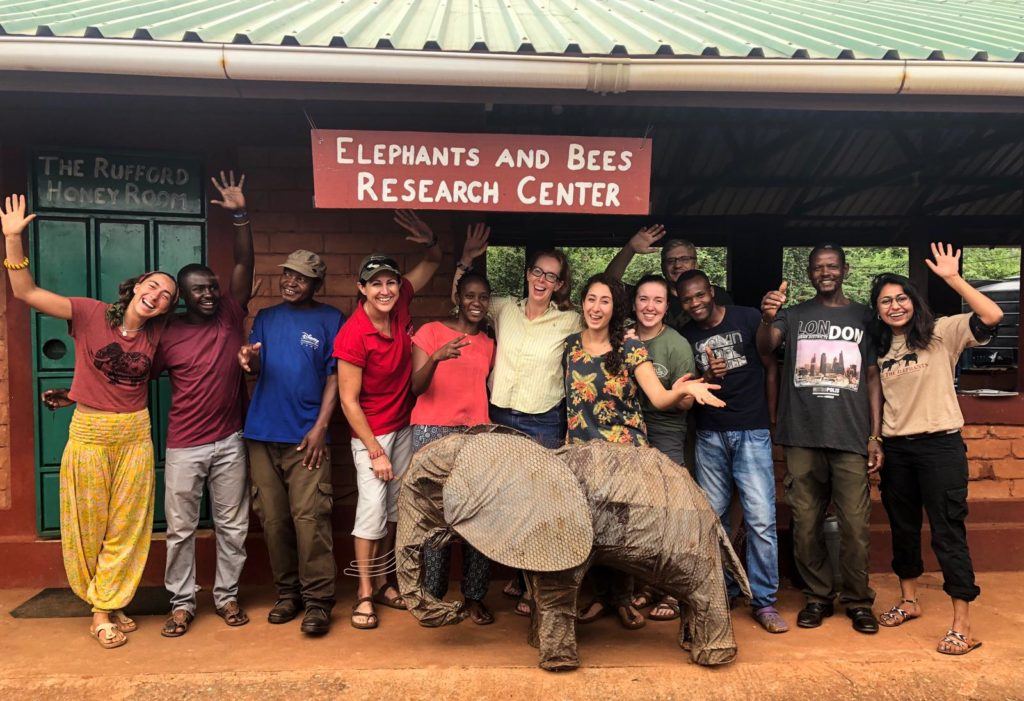 Ndovu walikua hapa? – were there elephants here? It’s one of the questions we asked farmers again and again during the weeks of peak crop-raiding season in Kenya – i.e. the rainy season of November, December, and January, during which time I spent about six weeks interning at Save the Elephants’ Elephants & Bees Project.

We’d received a call at the research center early that morning – elephants had crop-raided multiple farms in the nearby villages of Mwambiti and Mwakoma, where the Elephants & Bees Research Center is based, just outside of Tsavo East National Park in Kenya. The team jumped in the Land Cruiser and headed off to visit the farmers and survey the damage. Upon reaching the raided farms, we greeted the farmers and asked them to tell us the story of what had happened the previous night – when were the elephants here? How many were there? Bulls or families? How long did they stay? Did they break the Beehive Fence, or did they only eat crops that had been planted outside the border of the fence? Did the farmers use any other methods to try to deter them – yelling, lighting fires, banging mabati (corrugated iron), throwing rocks? How much damage did the elephants cause? Which crops did they damage? (Elephants like maize but they tend to leave sunflowers alone.) 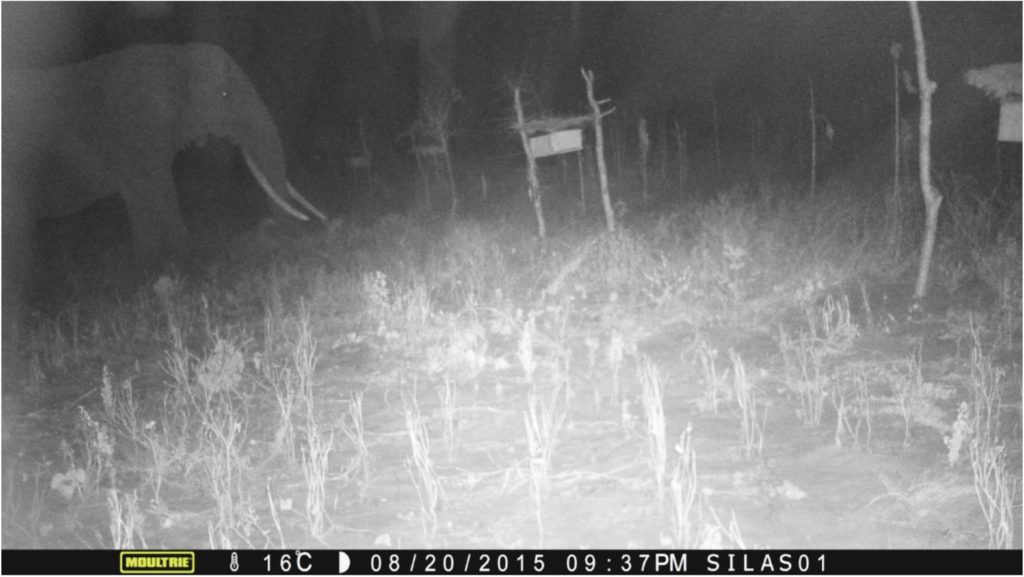 Caught on camera – an elephant being deterred from entering a field and raiding crops, thanks to the beehive fence protecting the farm.

The farmers shared their stories, and through them I learned that human-wildlife conflict is far more nuanced and difficult to address than I could have conceptualized from my desk in San Francisco as the Grants Manager at the Wildlife Conservation Network. Farmers told us about being forced to climb trees to take cover for several hours when a crop-raiding elephant entered their farm and blocked their path back to their house. We witnessed the aftermath when farmers had their entire livelihoods destroyed in a matter of minutes as a family of elephants moved through their farm.

During my time at the Elephants & Bees Research Center, I got a small taste of what it is like to be a field conservationist. I learned how to tell the age of an elephant by measuring the size of their footprint; there was one notorious crop-raiding bull referred to only by his foot size (measured in centimeters) – 50×30, meaning that he was over 55 years old. I learned to take GPS tracks to record the path that an elephant had traveled through a farm – by looking for footprints and the direction in which the crops had been trampled, we could get a general idea of where the elephants had gone. I learned that both elephants and people have been forced into an untenable situation. Farmers are living at a subsistence level, just trying to make ends meet, while elephants are trying to follow their historic migration route, but become trapped in these farming communities because significant human infrastructure (namely a major highway and the parallel railway, surrounded by two electric fences and an embankment) prevents them from moving where they want to go. The Elephants & Bees Project is trying to help mitigate these situations as best as they can, but it is a truly monumental task. 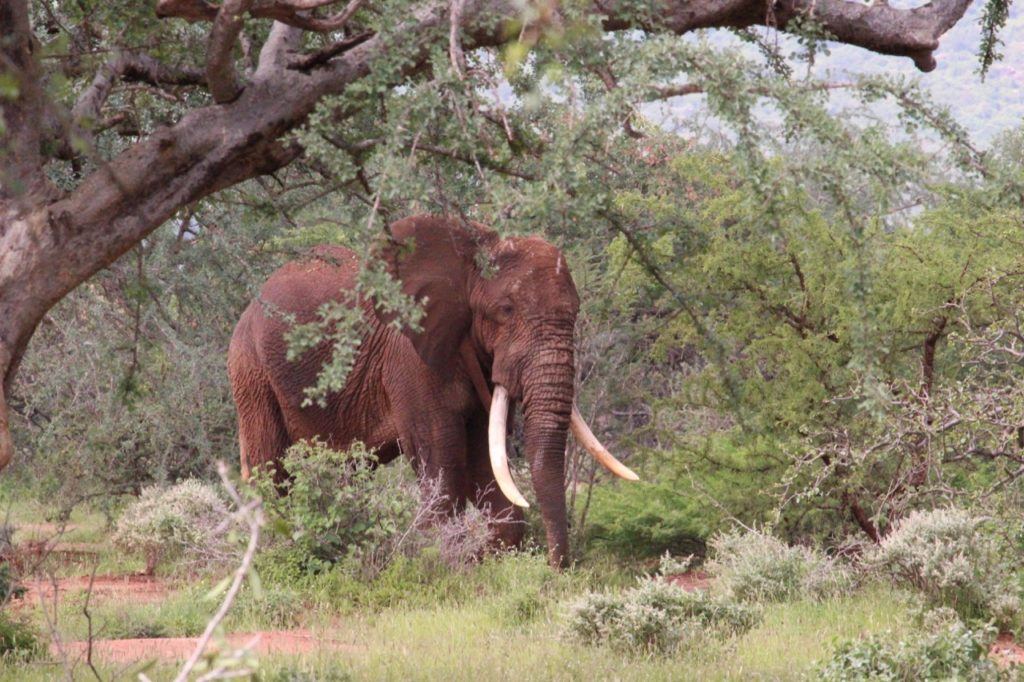 Sagalla, a collared bull, was photographed in the bush near community areas.

I came to the Elephants & Bees Research Center with an interest in elephants (of course!), but also with an interest in bees. I live in Oakland, California, and I’ve had a beehive in my backyard for about four years. When I started working at the Wildlife Conservation Network in 2016 and learned about Save the Elephants’ Elephants & Bees Project, I immediately became fascinated. The fact that elephants are afraid of bees and the story of designing Beehive Fences quickly became one of my favorites to share when people asked me about my job. So, this winter, I made the time to visit the project and experience it firsthand.

Most days we spent about four (very hot and humid) hours visiting different farms in the community, talking to farmers about recent raids, tracking where the elephants had gone, changing SD cards and batteries in camera traps, and checking their Beehive Fences for bee occupation. The hive occupation was actually a big challenge for the project while I was there – Kenya was plagued by a massive drought in 2016 and 2017, and many of the bee colonies absconded (i.e. moved out of the hives) since there was nothing around for them to forage on. As the rains returned in 2018, the bees started to come back – but during peak growing season for the farmers, still only around 30% of the hives were occupied. The Beehive Fences still function to help keep elephants out of farms even when the hives aren’t occupied, but they are much more effective as a deterrent method when they are occupied – because, just like people, elephants don’t like getting stung, so they flee both the presence and the sound of bees. It’s important to note that the Beehive Fences are an effective deterrent method but they do not fully prevent crop raiding – there are always some determined elephants who will break through fences, even near occupied hives. But luckily the fences, when occupied, are up to 80% effective at deterring elephants. 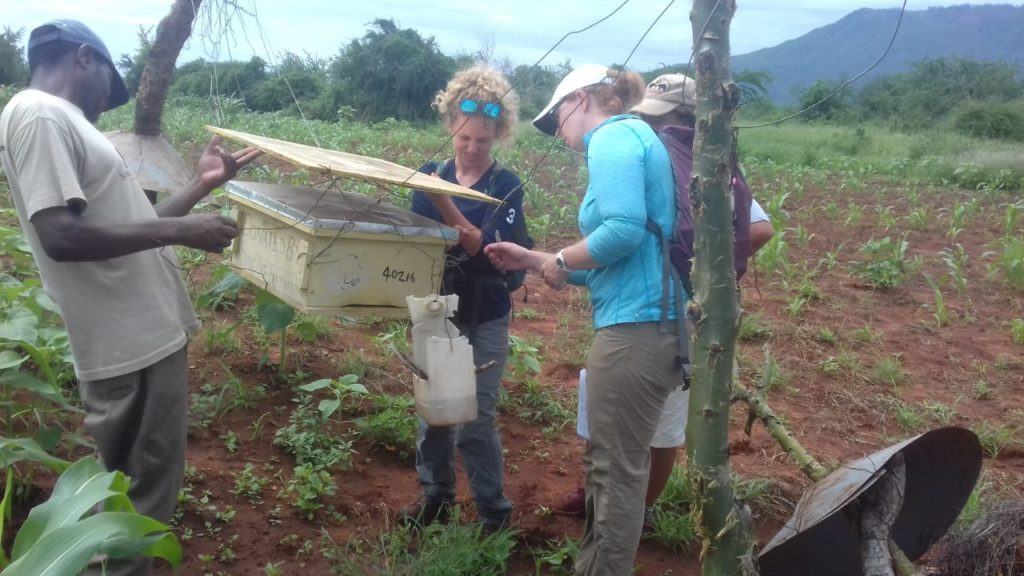 Monitoring a beehive fence for occupants and maintenance upkeep.

What I was most looking forward to during my internship was working with the bees, though with a healthy dose of trepidation as well. African honey bees are notorious for being more aggressive than European honey bees – which is the sub-species I was used to working with at home. More aggressive bees are better at deterring elephants – but they are also harder to work with than the relatively docile bees in my backyard. Another difference between the bees in Kenya and mine at home is that I was taught that a beekeeper should never under any circumstances open a hive at night – the bees are much more aggressive then. But in the hotter climate of Kenya, the opposite is actually true – it’s so hot during the day that the bees will stay in their hive and defend it, waiting until it starts to cool off in the evening to go out foraging. So, the beekeepers wait until evening to start working with the hives, because they are easier to work with then. But I use the term “easier” loosely – they are still so much more aggressive than any bees I had ever worked with before! 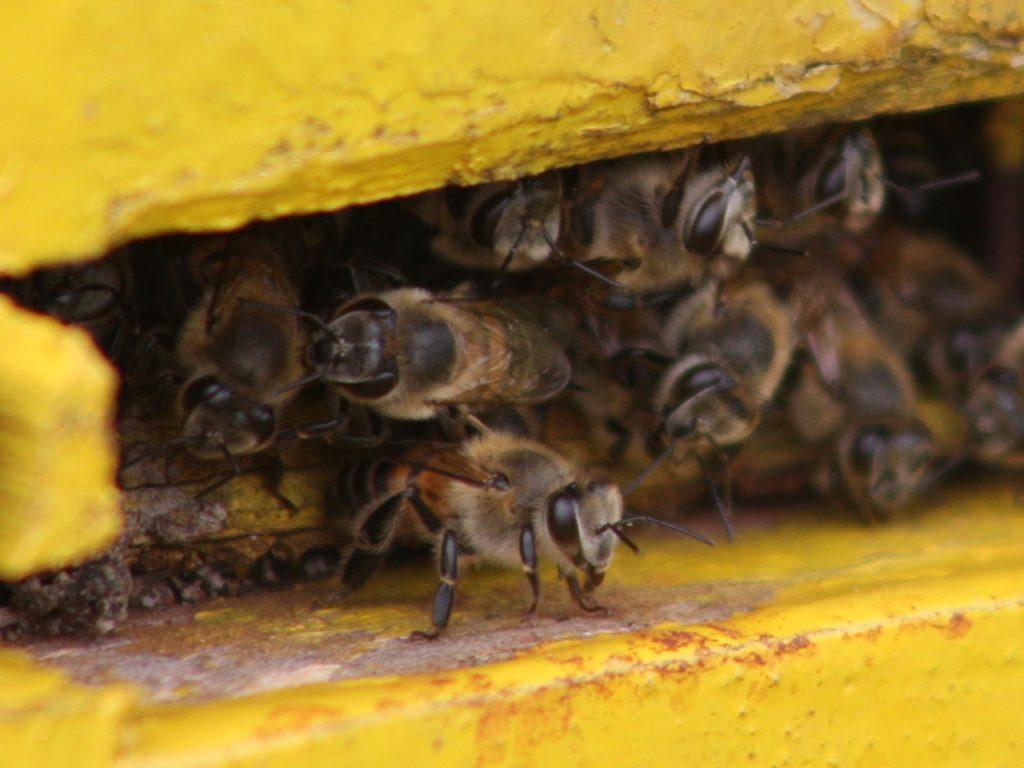 An occupied hive of African honeybees.

We did two rounds of night work while I was there – during the first, I got stung through my glove as the bees defended their honey. The second involved several bees somehow getting inside my bee suit. Remembering the “stay calm” mantra, I slowly stepped away from the hive in the hopes that I wouldn’t get more inside my suit. I waited quietly for about fifteen minutes while the rest of the team finished up harvesting honey from that hive, needing their help to brush the thousands of other bees off of the outside of my suit before I could safely take it off. The bees crawled across my face and buzzed in my ear while I continued stand and quietly as I could – holding my breath and squeezing my eyes shut. The anticipation of getting stung in a situation like that is far worse that the sting itself. And yet for whatever reason, they refrained from stinging me. My teammates eventually closed the hive back up and joined me – we brushed the bees off of each other with a branch, and still I remained unstung. When I was finally able to unzip my hood, I couldn’t believe my luck. 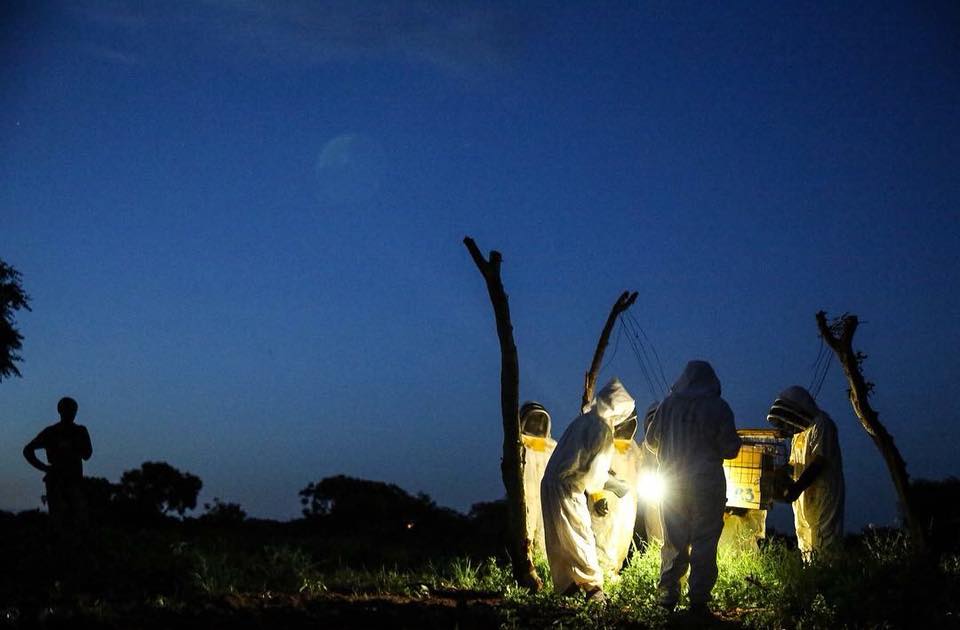 Working at night, when the bees are a their calmest, to repair beehive fences and monitor the hives.

Both the bees and I survived the night unscathed, and we were able to harvest enough honey that I could come back to California with a jar for myself. Like a fine wine, I’m saving it for very special occasions – and anyone who gets to enjoy it will have to listen to my tales of crop-raiding elephants and aggressive bees while they eat it. 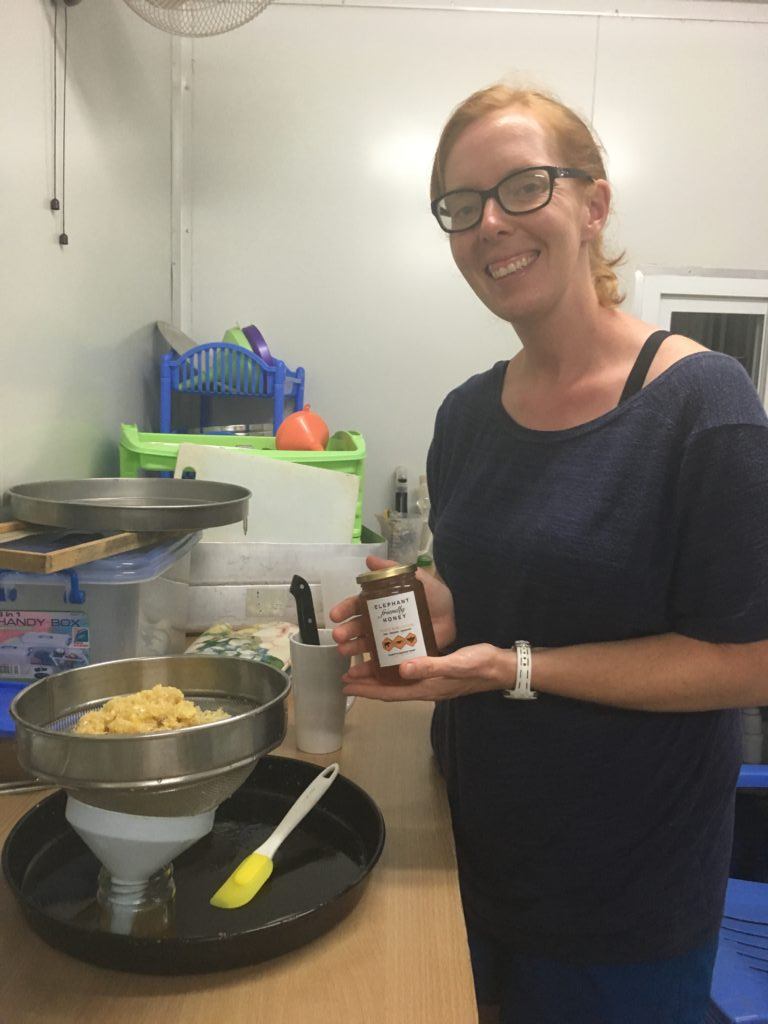