The regular 5 AM macaw vocalizations echo throughout the forested Punta Islita valley, marking the start of another busy day at the Macaw Recovery Network Captive Breeding Center in Costa Rica. The team slowly wakes and begins the day by preparing diets for the 100+ scarlet and great green macaws who eagerly await their breakfast. This breeding center and its team operate for one purpose: to increase the number of macaws flying free and ensure their future existence on this planet.

Once numerous throughout Central and South America, the threatened scarlet macaw (Ara macao) and the endangered great green macaw (Ara ambiguus) have been reduced to a fraction of their historical numbers. This is due to selective logging, stealing chicks from their nests for the pet trade, and loss of healthy forests. As you travel throughout the country, there is a noticeable presence of plantations covered in a singular crop, such as pineapple, banana, and oil palm. These monoculture plantations have grown by more than 500% in the last 10 years. For the great green macaw, it has resulted in an extreme loss of habitat and food resources. 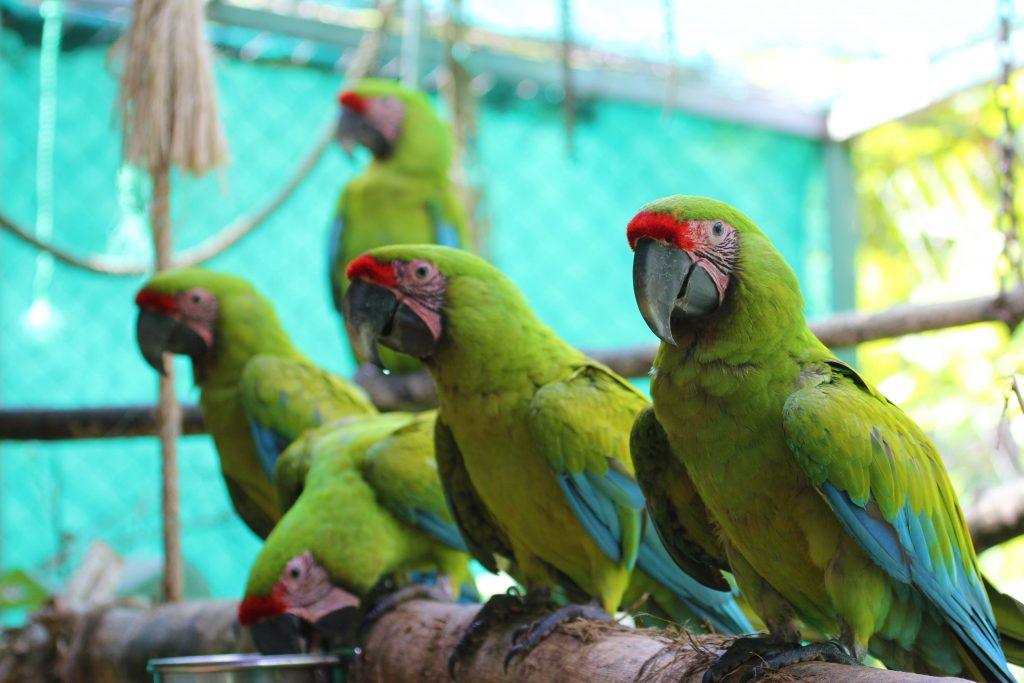 The mountain almond tree (Dipteryx panamensis) is a giant flowering tree found in parts of Costa Rica. It not only makes up 85% of the diet for the great green macaw, but, with its impressive height of 160 feet and trunk diameter of 5 feet, is also a favorite nesting choice. Just imagine a tree as tall as a 12-story building that would take 10 adults holding hands to encircle the base! Around 90% of monitored pairs choose to nest in this towering tree over other tree species. With wood so dense it’s resistant to termites, the mountain almond is coveted for construction and humans have logged it extensively. As a result, its population has been reduced by 90% and it is now also an endangered species. Today, it is illegal to cut this tree down in Costa Rica, but profitable logging persists and is difficult to catch and penalize. With the frequent felling of this tree and the overall loss of mature trees with large cavities for breeding, macaws are faced with fewer options to successfully reproduce in the wild. Macaw Recovery Network (MRN) is researching ways to safely stop and reverse this rapid decline of healthy habitat.

With their habitat and general safety facing such extreme threats, the great green macaw has been listed as endangered since 2005. A 2009 population estimation for Nicaragua and Costa Rica combined was around 1,500, with fewer than 600 individuals in Costa Rica. A more recent survey conducted with the collaboration of multiple Costa Rican groups, including MRN, revealed that those numbers could actually be much lower. Given the status of the species, the recommended action plan is to incorporate intensive management strategies like the ones MRN is currently carrying out. Those strategies include habitat protection and restoration, outreach and education, wild population management, and captive breeding-for-release, also known as ex situ management.

A macaw chick being weighed by MRN staff.

Simply put, ex situ management is the process of maintaining or increasing the number of endangered plants or animals in an “off-site” manner. This often takes the form of a breeding center whose purpose is to increase a population in a controlled environment in order to later release and boost the number of individuals in healthy habitats. MRN is one of only a few conservation organizations in Costa Rica using ex situ management to preserve the endangered great green macaw. Ideally, a species can be protected through means such as education and habitat restoration alone, but the current population size of great green macaws requires the added support of ex situ management. Necessary as it is, captive breeding-for-release is often a short-term strategy to bring a species back from the brink. Because of this, MRN has chosen a multilayered species management strategy by combining ex situ management with education, habitat restoration, and wild population management for a long-term impact to save the great green macaw.

The captive breeding population of macaws is made up of individuals from a variety of backgrounds, such as confiscations (especially after it became illegal to own any native species in Costa Rica), donations from other institutions and even individuals who were stolen from the wild as chicks. These individuals are not releasable back into the wild for reasons such as imprinting, physical injury, or having been taught unnatural vocalizations and other behaviors. As they may live up to 80 years in captivity, their care can be turned into a conservation benefit. MRN provides quality care in an appropriate environment to encourage safe reproductive behaviors. Their goal is to produce healthy and genetically diverse offspring that will grow into independent macaws equipped with the skills and knowledge to survive and later reproduce in the wild. 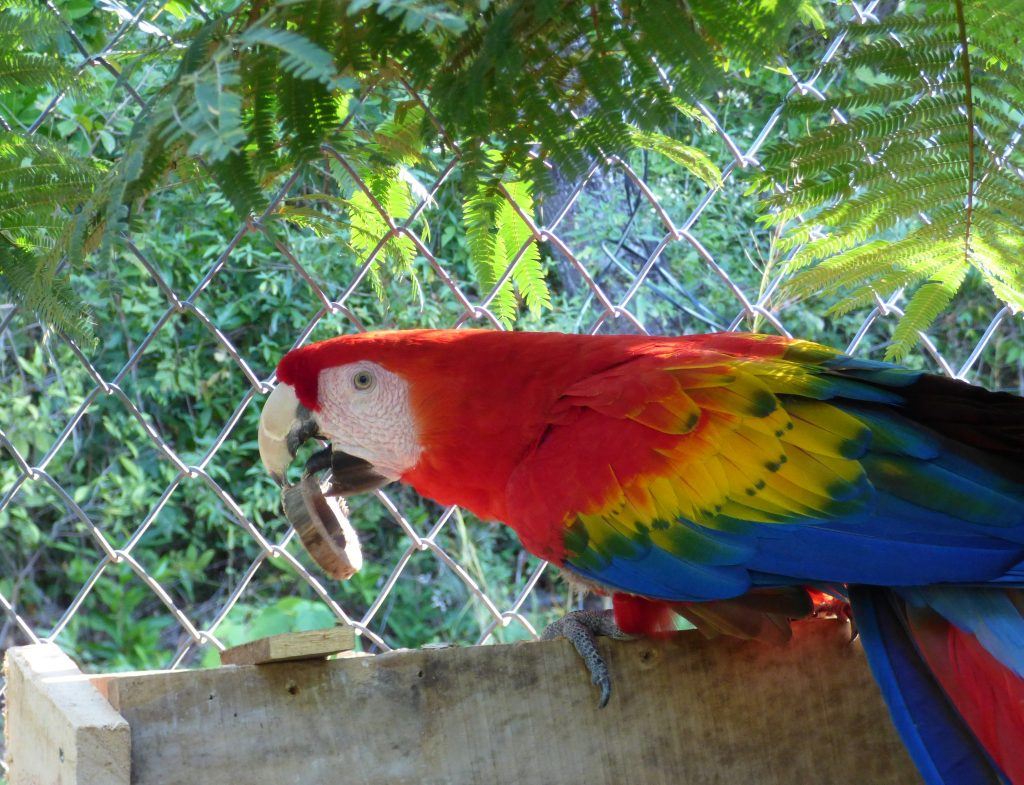 A scarlet macaw at a foraging box.

Currently, the breeding center has 11 great green macaw juveniles undergoing behavior observations to ensure that they are suitable for release into the wild. With the 2020 breeding season underway, that number will more than double before the end of the year. MRN hopes to release these great green macaws in northeastern Costa Rica, an area where the species has historically resided and is one of only two areas in the country where they can currently be found. MRN is eager to protect this natural habitat for not only the wild birds who currently reside there, but also for the ones bred in captivity who will eventually join their wild relatives.

MRN is continuing to push its captive breeding program further each year with a firm scientific base providing the platform needed to continue to learn, develop and provide the best animal care possible. Its multilayered management strategy allows the team to apply what it learns from wild population monitoring as well as captive breeding to inform future decisions in the protection of this amazing species. Until these birds are able to fly free, the staff and volunteers at Macaw Recovery Network will continue to rise with the sun to care for them, working towards a future where they are independently thriving in the wild.