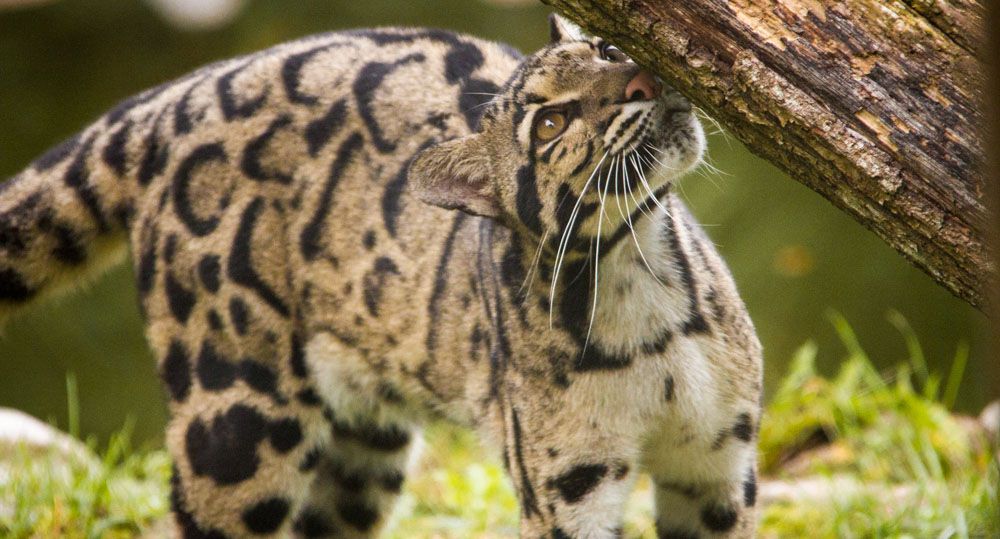 In the late 1960s Jack relocated to Sumatra, a tropical island nestled between the Indian Ocean and the South China Sea. His home there also felt like an island, a house surrounded by a sea of spectacular wildlife—tigers, elephants, orangutans. Rhinoceroses would wallow in the cool mud beneath Jack’s house. And inside, curled up at the foot of his bed, docile as a tabby cat, was a clouded leopard. It had been orphaned as a kitten and with no rescue centers in Sumatra at the time, would have surely died if Jack hadn’t taken it in. Jack would one day tell his nephew, conservationist Dr. Jim Sanderson, that the years spent with this clouded leopard were his most cherished. Fortuitously, Jim has dedicated his life to protecting small wild cats and is working on a project to benefit the clouded leopards his uncle so adored.

Bigger than a small cat, yet smaller than a big cat, the clouded leopard is striking; its brownish-grey coat a potpourri of marbled blotches, black streaks, and spots. Although found in many parts of Asia, Jim and his colleague, Po-Jen Chiang from Formosan Wild Sound, are focused on Taiwan, where clouded leopards have been effectively eradicated since the 1940s. Though no longer in Taiwan’s forests, clouded leopards remain very much alive in its culture. Statues of this long-absent cat are peppered throughout Taiwanese communities, reminders of the significance they hold. This cultural prominence is prompting indigenous people to drive efforts to bring them back.

Reintroduction is not a new idea, it had been considered in the 1980s, but never gained traction. However, there is now renewed interest from three indigenous tribal groups inspired by Po-Jen’s years of research on the subject. Along with cultural value, Po-Jen’s research shows a solid ecological reason for reintroducing the clouded leopard. Decades without them has allowed certain prey species to rebound a little too well, local farmers are losing crops to a growing onslaught of sambar and macaques. This is good news for clouded leopards, as there is plenty of prey and habitat waiting for them in Taiwan and people there are eager for this predator to return.

Fourteen hundred miles away, in a breeding center in Thailand, there are five active and four potential clouded leopard breeding pairs that could be the key to Taiwan’s reintroduction. It’s remarkable that so few individuals could propagate an entire population, but these cats breed quickly and if their offspring can be released into Taiwan’s forests, conservationists have a real shot at bringing this species back. If they can pull it off, the benefits would be numerous; increasing the habitat range of this vulnerable species, controlling an overpopulation of prey, protecting local farmers’ crops, and returning a cultural symbol to the people who have revered it for centuries.