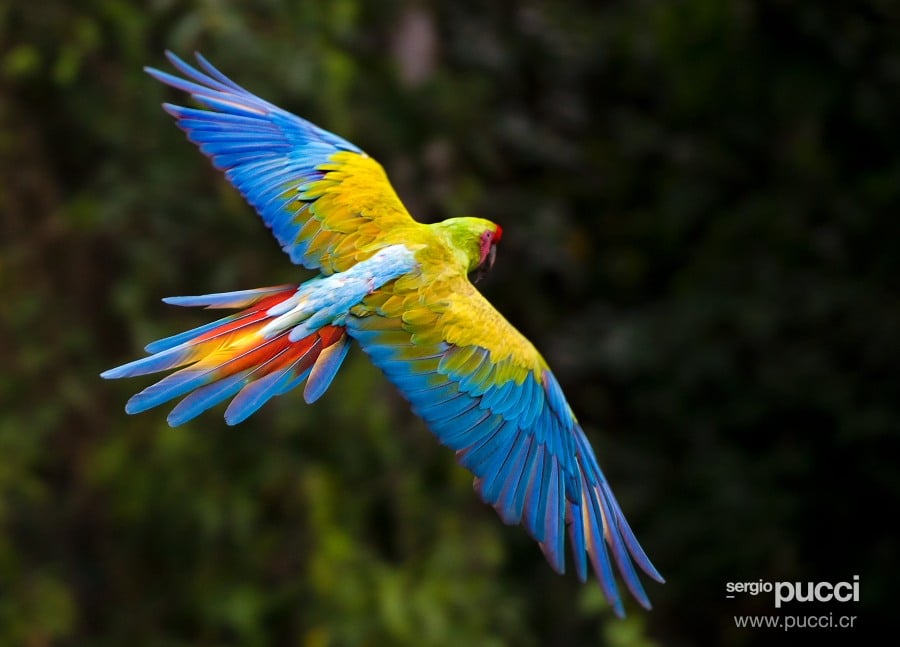 There are 19 species of macaws in the world, and these birds are among the most well recognized (worldwide) among all parrots. Dr. Sam Williams, the director of the Costa Rica based conservation group The Ara Project, works with two species of macaws, the well-known scarlet macaw and the little known great green macaw.

As Sam put it at the 2017 annual Wildlife Conservation Expo in San Francisco, the scarlet macaw is like a corvette—red, loud, and screams, “Look at me!” But the great green macaw is different in both personality and plumage. Subtle and sophisticated, like a classy Aston-Martin that only reveals its beautiful colors when it flies.

Great green macaws face many threats in their current home range, from Honduras to Colombia and into Ecuador. At one point, it could be confidently said that there were hundreds of thousands of individuals, maybe a million! Today that number has declined and only about 1,500 macaws are left.

Nearly half of the rainforest–encompassing their entire home-range–was eliminated in just a matter of decades, due to logging and agriculture. The Ara Project works to restore great green macaw numbers, though this is no easy feat.

These man-made threats continue to destroy what’s known as the primary forest—pristine, native tree species that have survived centuries without suffering the effects of human activities like logging. However, after primary forest trees have been cut down and the forest regenerates, it’s known as the secondary forest. In Costa Rica, 16 percent of the land has logged and then regrown as secondary forest. As this forest lacks the ancient trees with hollows/cavities that macaws need for nests  it is unsuitable for them to live in and raise their young in.

Macaws depend on a slow growing, enormous tree called the mountain almond tree, a part of the primary forest. This massive tree is large enough that a human being could easily hide behind it’s trunk and with wood dense enough that it’s only recently been threatened by logging, no thanks to advances in saw blade technology.

The birds use the towering trees to keep their nests safe. 90 percent of known macaw nests in Costa Rica are in the cavities of these trees. These cavities form when a branch falls off and the wood rots back to create a hollow. Not only that, the birds also get food from the nuts and drinking water from cavities in the tree. But unfortunately, 90 percent of these trees have been cut down. The remaining 10 percent are in fragmented portions of Costa Rica.

In many places of suitable habitat for macaws, they face another threat—the illegal pet trade. Macaw chicks are taken from their families and forced to live with humans, often as the only macaw. This is torture for a highly social bird such as this.

Birds like the great green macaw are iconic, a beautiful flagship and umbrella species for the rainforest. By protecting great-green macaws in Costa Rica, we also help protect 250 mammals, 600 different bird species, and 400 different reptiles and amphibians, and a quarter of a million insects, many of which live in the rainforest.

The Ara Project knows that it is possible to save great green macaws. By working directly with the community in Costa Rica, they hope to restore the population and eliminate threats like the illegal pet trade and habitat loss. The community of Costa Rica is considered very progressive and conservation oriented, open to the outreach work and hands-on conservation being done by The Ara Project.

For just a few hundred dollars, they’re able to repair nests in trees and boost the breeding population. From there, they can monitor the chicks as they form into social groups.

They’re also able to reintroduce birds rescued from the pet trade to the wild in areas that they’ve gone extinct in the past. The Ara Project has reintroduced 47 great green macaws (and many more Scarlet macaws) to date and have plans to expand the program in the future.

Not only that, they also run a successful breeding program at their breeding center for boosting the area’s macaw population, and the program is just getting started. The breeding center houses birds that have been rescued or confiscated that are unsuitable for release into the wild. These birds can still produce chicks that can be successfully released into the wild. These chicks will eventually produce the next generation of macaws in the forest on their own.

The Ara Project’s work is going from strength to strength. However, they have plans to expand and make a larger impact to protect great green macaws. Great green macaws are found in six different countries, in many isolated populations. They hope to be able to scale up their work to connect the fragmented populations by working with macaw conservationists in every country and to find the best methods and practices for boosting their populations.

With generous public support, Dr. Sam Williams and the team at the Ara Project know that macaws will once again thrive in their natural habitats, flying high above their forest home; and they won’t stop until that happens.

Learn more about The Ara Project by visiting TheAraProject.org