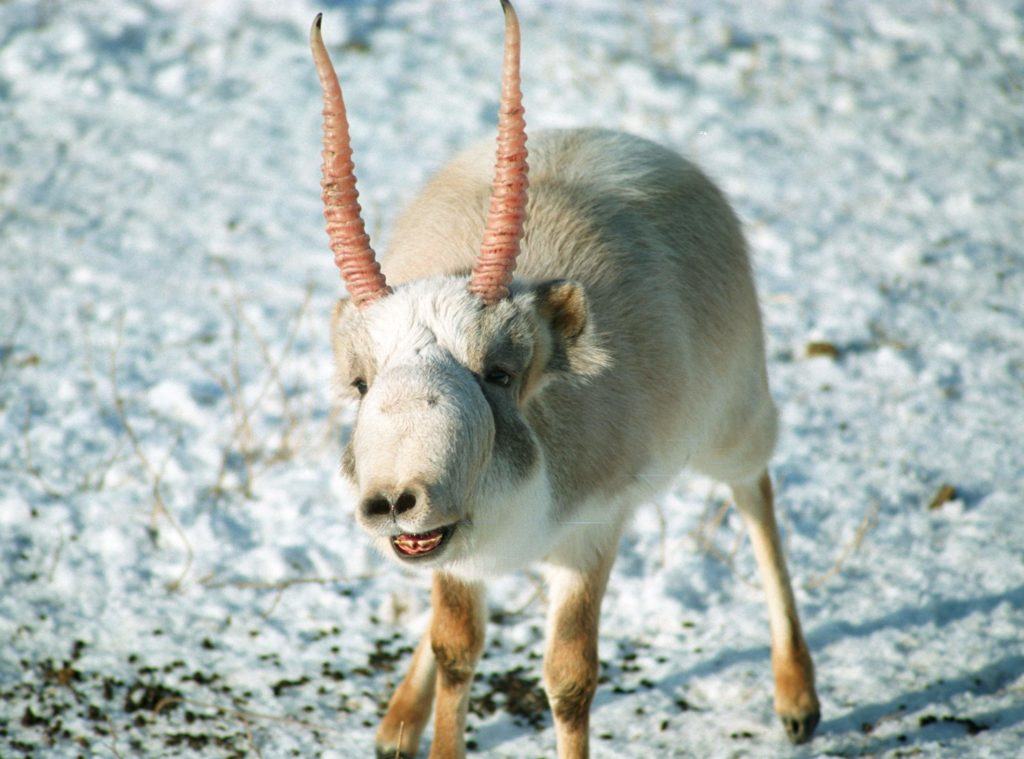 Dusk is approaching. In less than an hour, the vast Ustyurt Plateau, situated between Uzbekistan and Kazakhstan, will be plunged into darkness and impossible to navigate through the thick snow and –20-degree temperature. Hamza, a 35-year-old conservationist working for the Saiga Conservation Alliance (SCA), focuses his binoculars on the horizon one last time, hoping to spot saiga antelope in the dwindling sunlight. Despite being an expert tracker with extensive experience searching for saigas in this immense landscape, he comes up short.

Hamza and his colleagues from SCA have spent the past week surveying the traditional migration routes of the Ustyurt saigas via motorbike. So far, they had only come across a few saiga footprints. This was strange since saiga populations in this area were doing well and had not been affected by the disease outbreak that devastated other saiga populations last year. That night, the team reviewed their notes from the survey, also called a transect census, and were left with one question: where are the saigas?

As far back as the ice age, tens of thou-sands of saiga antelopes roamed across eastern Europe, Asia, and Alaska. In the 1990s, the Ustyurt saiga population was bigger than all other saiga groups, numbering 265,000. Unfortunately, in the past 25 years, the overall saiga population has dropped by 95% due to poaching and disease, and the number of saigas in Ustyurt plummeted by 99.5%.

Despite the drastic decline of the Ustyurt saigas, things began looking up for them in 2016; census results revealed they were rebounding. Hamza and the SCA team believed this was due to reduced poaching and the opening of migration corridors along the Uzbekistan-Kazakhstan border fence. While the fence remained, 125 openings or “corridors” were created along its length, allowing saigas to once again move between both countries for feeding, breeding, and birthing. Over the past year, SCA also worked with anti-poaching rangers to protect saigas in the Saigachy Reserve, the largest protected area in Uzbekistan.

If reduced poaching and adding corridors created a saiga population increase in 2016, why couldn’t Hamza find any now? Saiga Conservation Alliance thinks saigas may have simply found new migration routes that have yet to be located. Locals from nearby villages have seen saigas moving through other, more isolated parts of the region that deviated from their usual migrating routes. So, it’s possible that saigas are forging new, safer paths away from humans.

Hamza and the others returned to SCA headquarters early the next morning, eager to share their thoughts with their team and to start getting to the bottom of this mystery.