Crawling on hands and knees, Thomas Ekiru turned away from a branch choking the bushy pathway. The thick Mathenge bushes form near-impenetrable barriers across Lorian Swamp, which lies at the terminus of Kenya’s Ewaso Ny’iro River. Until recently, this region was unfamiliar to Ewaso Lions (EL), who promote coexistence between lions and people. But reports that lions were killing livestock in Lorian prompted Thomas, EL’s Regional Coordinator, to investigate in hopes of identifying this new pride and avoiding potential human reprisals. 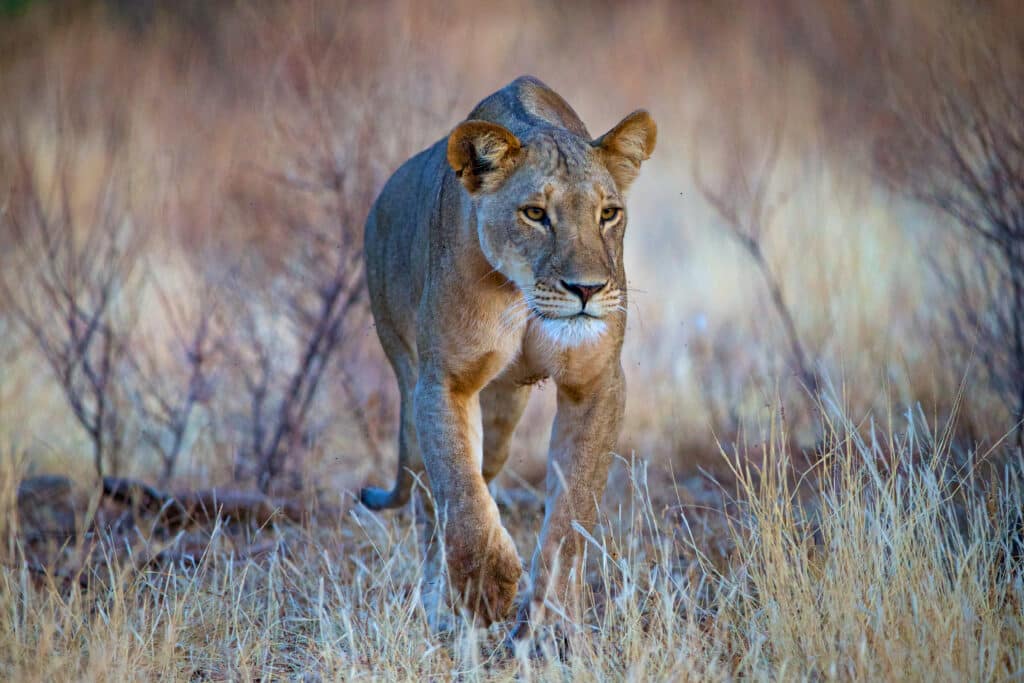 Lions are drawn to the thick Mathenge of Lorian, feeling safe in these bushes where they can hide from humans and raise their cubs in dense cover.

Despite being a swamp, there is little water in Lorian. The prolific, invasive Mathenge consumes most of the water in Cherab Community Conservancy, where Lorian is located. Humans have a difficult time venturing into the Mathenge, as Thomas discovered firsthand, but lions find the safety of this thick foliage very desirable. Lorian is a good home for the pride, but the lack of water brings them into conflict with people. Cherab communities must dig deep holes in the barren riverbed for water access, using donkeys to ferry water containers back to nearby villages. But the lions also use these holes, often emerging from the bushes to attack the unsuspecting donkeys. 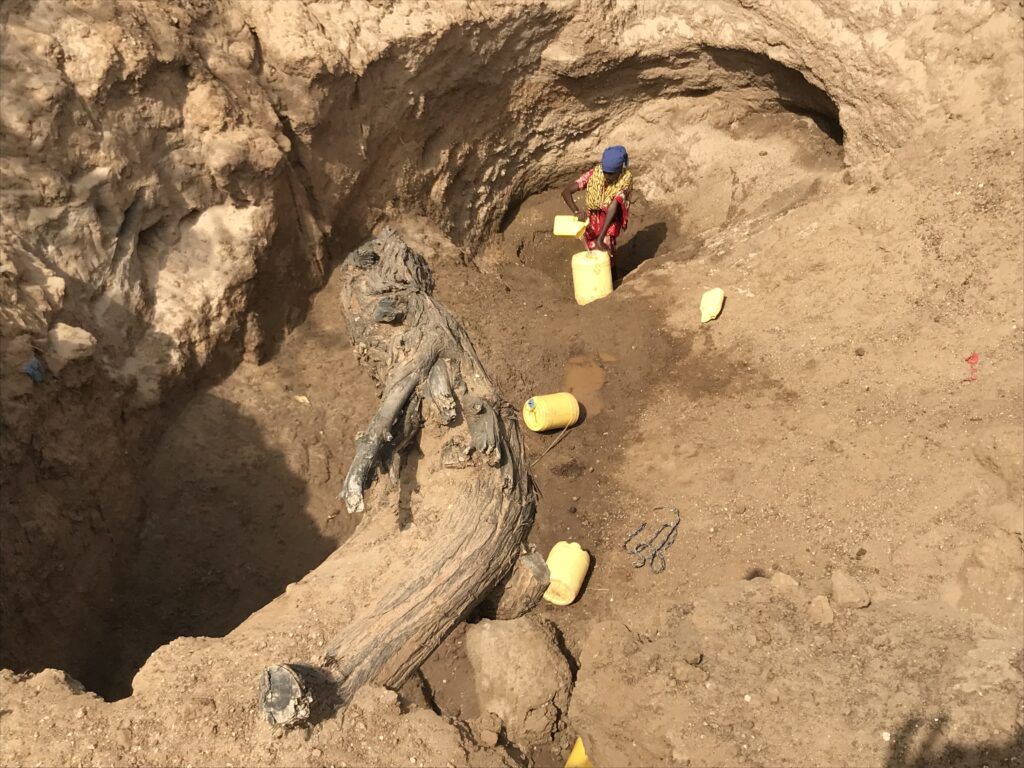 Cherab villagers must dig deep holes in the riverbed to find water.

The Northern Rangelands Trust, a regional conservation organization, was conducting a wildlife study with the Wildlife Research and Training Institute in the region at the time. Because human-lion conflict was high in Lorian, they invited EL to join that portion of the expedition. Thomas and his colleagues would gather data on the lions to understand conflict at the water holes, but first they needed to find them. A ranger informed Thomas of a narrow pathway into the bushes, so his team followed it, eventually discovering a lion carcass deep in the Mathenge. Though they couldn’t be certain of the cause of death, the dead lion indicated that the pride was also struggling to get by in the parched swamp. This likely amplified livestock predation near the one shared water source. 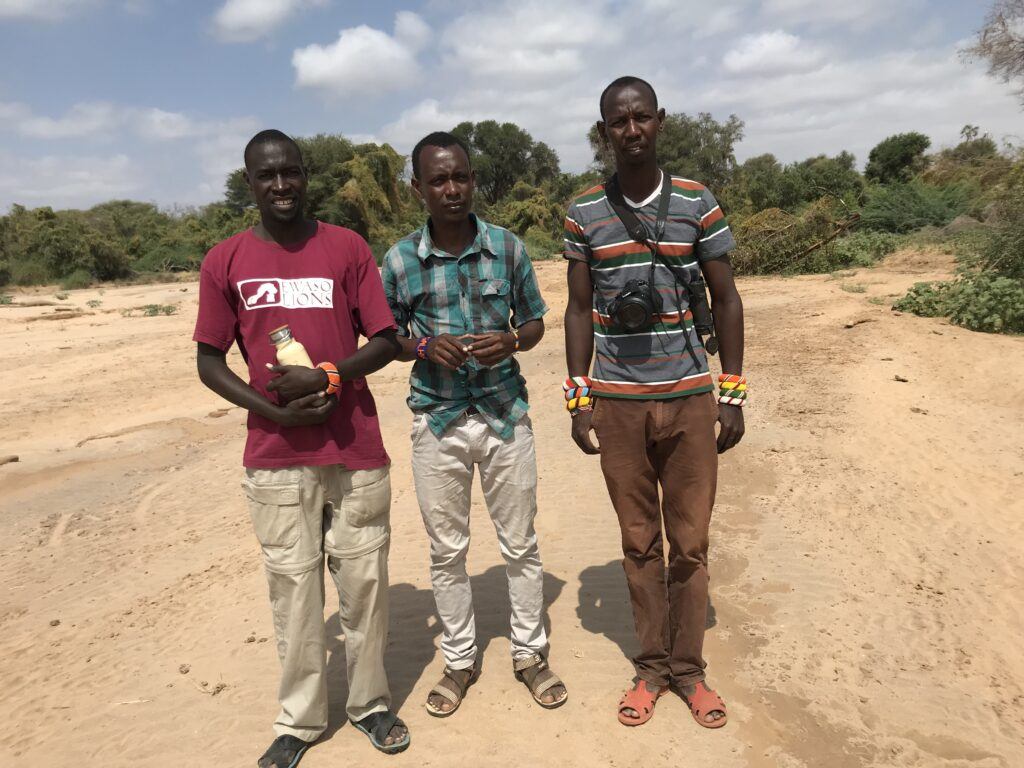 More evidence was needed to understand the pride’s status, so the team decided to lure the big cats out of the Mathenge. They played distressed animal sounds on a loudspeaker at night, which piqued the lions’ interest. This allowed EL to capture footage of the pride—they viewed two males, two females, and three cubs, and reports indicate more lions live in the area. With this many lions present, EL is committed to managing conflict before the pride or local communities are put in danger. Cherab villagers want lions to remain in Lorian; their newly established conservancy is meant to protect all wildlife, but in order to achieve peaceful coexistence, the risk to their livestock must be reduced.

Now that EL has a better grasp of the situation, they’re developing plans to help Cherab Community Conservancy manage the conflict. They’re hoping to collar the Lorian lions, making it easier for conservancy management to track their whereabouts and warn villagers when they are near the water holes. EL will also bring Cherab leadership to visit conservancies where they operate, to see firsthand how coexistence between communities and lions is possible. With the right strategies, conflict in Lorian can be cooled so people and lions can comfortably live side by side.