In Mozambique’s Niassa Reserve, the fate of lions is profoundly linked to the lives of the local people. That’s why the team at Niassa Lion Project (NLP) often say, “our work is as much about people as it is about lions.”

Villagers in Niassa lacking a livable income frequently turn to the forest for food. They set wire snares to trap bushmeat, but often catch lions instead. Bushmeat snares are now the single biggest threat to lions in Niassa, and despite NLP’s significant progress in removing them, the problem persists. Recently, NLP’s staff was heartbroken as one of their best known lions, a 10-year-old female called Fatima, snagged her leg in a hunter’s snare. The hunter discovered her and thinking he could profit from her skin, claws, and bones, attempted to kill Fatima with a spear. Determined and powerful, she broke free, but the spear had already pierced her lung. Though eventually found by NLP staff who did everything possible to save her, Fatima died. 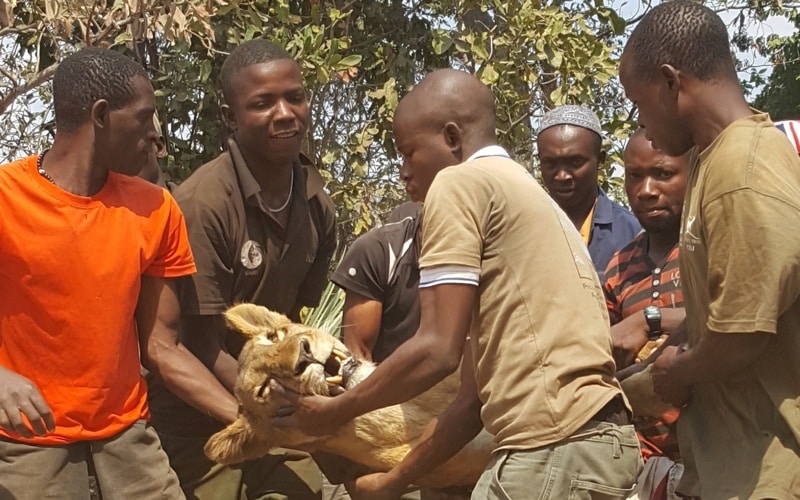 Devastated by the loss, NLP immediately called a meeting with nearby villages. With few exceptions, the majority of NLP’s staff came from these same villages, so they were facing their elders, neighbors, friends, and families. With conviction, they urged the community to accept their responsibility for the snare and encouraged them to work with NLP to end the problem. NLP’s programs are astutely designed to address the hunger and poverty that drive locals to hunt for bushmeat by providing them with alternative sources of protein and offering viable opportunities to generate income. Though resistant at first, the elders for the first time in 15 years apologized to NLP for the loss of a lion. It was an apology given not only in words but in action, as the elders then allocated their community funds to hire six scouts to remove other snares from around their village. Fatima’s tragic death has been turned into an opportunity to improve the lives of people, and thus safeguard the beautiful lions of Niassa.