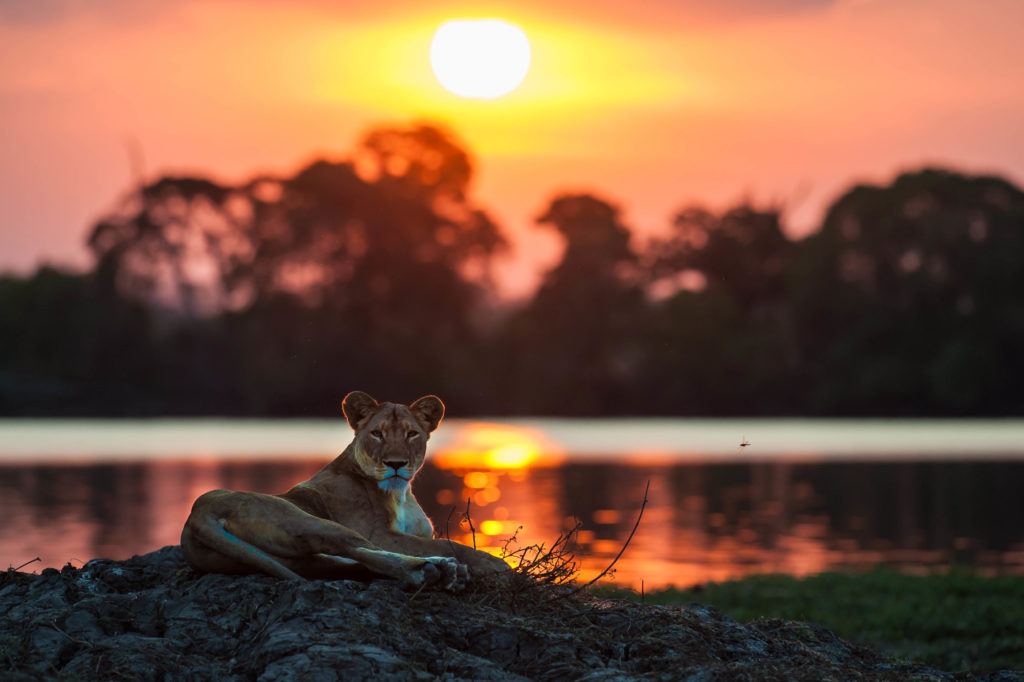 Responding to the alarming, drastic decline of African lion populations, last year Wildlife Conservation Network and the Leonardo DiCaprio Foundation launched the Lion Recovery Fund (LRF). Designed to get crucial funding quickly and directly to conservationists in the field, the LRF has spent its inaugural year making key investments into smart, strategic projects designed to bring lions back. As of today, the LRF has allocated more than $2.5 million to 27 projects with 18 different organizations across 15 countries. Threats to lions are diverse, complex, and numerous; the LRF’s portfolio of grants have supported projects to target these wide-ranging issues throughout the African continent.

Today, the Lion Recovery Fund is announcing its latest grants to support lion conservation. These grants demonstrate the range of approaches, strategies, and geographies represented in lion recovery efforts. We have funded some genuine innovations such as a novel project in Tanzania that incentivizes local communities to live with and protect lions, and we have renewed support for successful projects such as a campaign against the consumption of bushmeat in Zambia’s urban areas.

It’s the incredible work of the grantees we are supporting and the generosity of visionary donors who make our funding possible that continue to give us confidence that lion recovery is possible.

In Tanzania’s Ngorongoro Conservation Area (NCA), the grant to KopeLion will enable them to start an incentive payment program wherein communities receive rewards for protecting lions on their lands, empowering them to be key allies in conservation. The NCA is a critical site for lion conservation. However, the NCA is also home to almost 100,000 people, the vast majority of whom are traditional pastoralists who rely almost exclusively on livestock for their livelihood. Lions may kill livestock, prompting retaliatory killing of lions by pastoralists. As a result of this human-lion conflict, lions have disappeared from much of their historical range within the NCA. Since 2011, KopeLion has worked to mitigate Ngorongoro’s human-lion conflict through implementation of the Lion Guardians model which engages local community members in lion protection.

Lions in the Tarangire/Manyara system are affected by two primary threats: retaliatory killing as a result of human lion conflict and due to conversion of the rangelands around the protected areas. The wild herbivores of Tarangire make large-scale seasonal movements into the adjacent pastoral lands, and the health of the entire ecosystem is dependent upon those areas being well-managed and protected. African People & Wildlife in partnership with the Tarangire Lion Project have requested funding from the LRF for two activities: a) Rangeland management to tackle degradation of the pastoralist lands on which the local communities, livestock and wild herbivores depend. b) Monitoring of lions using satellite collars to enable a team of community Wildlife Warriors to warn livestock farmers when the lions enter into or come close to their grazing lands. This monitoring will also enable the team to detect changes in the number of lions in the ecosystem, which will allow for adaptive management of their conservation program.

Tanzania’s Serengeti National Park contains one of the largest lion populations on earth. This population is threatened by growing human pressures, including high levels of snaring of wild ungulates for bushmeat, illegal livestock grazing in the park and human-lion conflict around the edges. Frankfurt Zoological Society has requested funding for four activities to support the efforts of the Tanzania National Parks Authority: a) the development of a control room to coordinate law enforcement and PA management; b) an additional de-snaring team dedicated to removing poachers’ snares; c) veterinary drugs to allow for the darting of lions and other animals caught in snares; d) a smart parks (LoRa) monitoring system – which allows for easy detection of collared lions when they pass within range of fixed masts, such that information will be passed to the KopeLion team when collared lions pass into neighboring high-conflict zones. Part of the requested funding will be released as a match that can be unlocked through further donations by the local tourism sector to encourage greater local participation in conservation efforts.

In Zambia’s Kafue National Park, Musekese Conservation  is a not-for profit conservation initiative of a small tourism outfit, Jeffrey & McKeith Safaris, based in Kafue National Park. Musekese have partnered with Panthera—who’s objective is to develop a series of 5 intensive protection zones (IPZ) in areas of high tourism value, high value for carnivores, and high value for tourism in the park. Musekese are going to establish a second IPZ in northern Kafue to tackle the threat posed by bushmeat poaching. Lion numbers in the area are suppressed by the reduction in densities of prey that has occurred due to bushmeat poaching. Support for anti-poaching is the most direct means of tackling that threat. Musekese have requested support for equipment for the operations of the anti-poaching unit that they are setting up. LRF funding will be used to leverage further support from visitors to the park.

In Zimbabwe, the Zimbabwe Parks and Wildlife Management Authority has requested support for their national lion conservation planning process. Funds have been requested to support a process to revise the current national lion management plan. The management plan will be revised in conjunction with key stakeholders and experts in the country via a participatory workshop process. The purpose of revising the plan is to outline procedures, protocols and priorities for issues such as: human-lion conflict; reintroductions of lions; the steps needed to improve the conservation status of lions in the country; research priorities for lions; standardised nation-wide monitoring protocols. The management plan will feed directly into the conservation and management of lions in the country. Ultimately, this process has potential to catalyse conservation efforts in the parts of the country with potential for lion recovery, while ensuring continued protection for the species in strongholds.

Africa-wide, There is a plan underway to partner with other key funders to establish a collaborative lion database that will be used to provide a continually updated assessment of the abundance and distribution of lions in Africa. This information will be highly valuable for conservation planning and for assessing the impact of conservation investments. The database will be institutionally ‘owned’ by the IUCN Cat Specialist Group, on behalf of the wider conservation community. A database coordinator would be appointed by Endangered Wildlife Trust, whose work would be overseen by an oversight committee, comprising key individuals involved in research into lion numbers and distribution. As well as providing an essential resource for conservation actors, the database will help to foster collaboration among key stakeholders.

In Zambia, the LRF helped Wildlife Crime Protection (WCP) to kick-start a highly innovative campaign designed to reduce the consumption of bushmeat sourced from poaching in 2017. The bushmeat trade represents the single greatest threat to lions in Zambia, by reducing prey and also by resulting in the incidental capture of lions in snares. WCP’s project is testing innovative methods to raise public awareness of the dangers and issues associated with consuming illegal bushmeat. These dangers include health risks associated with eating bushmeat, the risks of being arrested, and the impact that poaching has on Zambia’s economy by damaging the tourism industry.
Update: Based on initial promising results of the campaign, the LRF provided an extension to this grant in 2018 to allow WCP to continue this excellent work. The hope is that this project will soon be implemented in neighboring Malawi where bushmeat poaching is also a massive threat.

Learn more about the LRF