In the Samburu region of northern Kenya, home to one of the largest populations of lions in the country, conservation is serious business. Our partners at Ewaso Lions focus their efforts on protecting lions in this region, and they depend on the local community to help them, including the Samburu women. As prime homemakers and livestock caretakers, Samburu women come into regular contact with wildlife just as often as the men in their community do. It was for them that Ewaso Lions created the Mama Simba (or “Mother of Lions”) program, as a way to give women a role in protecting lions while also learning how to live peacefully alongside wildlife.

Wildlife conflict in northern Kenya is a regular occurrence with a high price—now exacerbated by a recent drought that has predators desperate for prey whose populations have plummeted in the struggle for water and vegetation. This means that carnivores often turn to the Samburu peoples’ livestock as a source of food.

As pastoralists who depend on their livestock for survival, losing even one animal is devastating and has far-reaching consequences. Many farmers choose to retaliate against the carnivores via lethal means—guns, spears, or poison. In order to save lions, Ewaso Lions knew they had to first address the local community’s desire to protect their livestock and livelihoods before they could show them why lions were important for a healthy ecosystem.

In 2010, Ewaso Lions began their Warrior Watch program with this goal in mind, giving the local men, the Samburu Warriors, an opportunity to build on their traditional role as protectors of the community, by also serving as ambassadors for lions. As ambassadors, they not only protect villages from conflicts with lions, but also teach their friends and family how to co-exist peacefully with them. Ewaso Lions then started the Lion Kids Camp, where children are taught to respect wildlife and trained in the skills necessary to be the next generation of park wardens, safari guides, and wildlife biologists.

Ewaso Lions hoped to provide local women with similar opportunities, to both be a part of lion conservation and make their lives better, so they established the Mama Simba program. When the program began in August 2013, it was a women’s education initiative for a classroom of ten women. The women were taught to read and do arithmetic, which opened doors to many other daily Samburu activities in livestock trade, beadwork, and selling food from their homestead.

Since then, Ewaso Lions has worked with the Mama Simba women to teach them alternate techniques to protect their livestock (without needing to resort to violence), for instance, through reinforcing bomas—the traditional wooden livestock enclosures used in Africa, with thorn bush to keep hyenas and leopards out. The women, like the men in the Lion Watch program, also attend conservation workshops where they are taught how to identify different predators by their tracks. Many of them have never seen wildlife before, including lions, despite living alongside them. For others, their experiences with wildlife have mostly been unpleasant—seeing elephants destroying their crops, or finding the remains of a camel after a lion attack. Ewaso Lions remedies this by taking them on safari drives to Samburu National Reserve where they can see wildlife safely from a convoy of trucks. These positive experiences are a powerful way to show them that nature can be admired, not just feared. 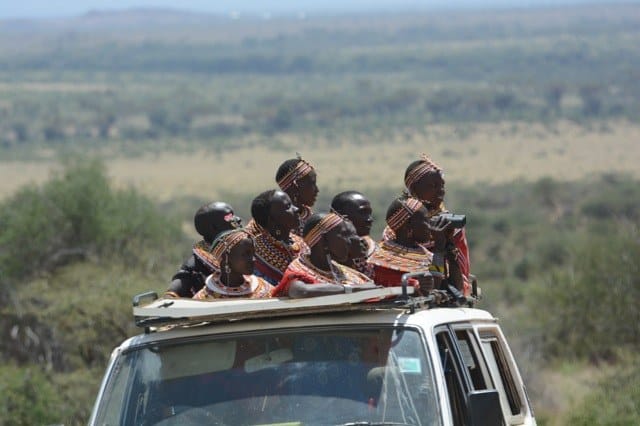 Today, more Samburu women want to get involved in the program, both as a means to feel empowered and as a way to feel like an integral part of the community.

Ewaso Lions’ success with the Mama Simba program has resonated deeply within the WCN Network, and other partners in the network are now planning to implement similar programs in their regions. For example, our partners at the Saiga Conservation Alliance (SCA) have already begun laying the groundwork for their own women’s program, called the Mama Saiga program. The Mama Saiga program aims to empower the local women of Uzbekistan by teaching them how to generate an income through traditional craftwork and by providing them with personal development classes. By making the community stronger, SCA hopes that the local people won’t need to turn to poaching endangered saiga for their meat and their horns to make ends meet.

Only by involving communities in conservation, addressing their needs, and changing their attitudes about wildlife can there be hope for a stronger future. Ewaso Lions is a perfect example of this.