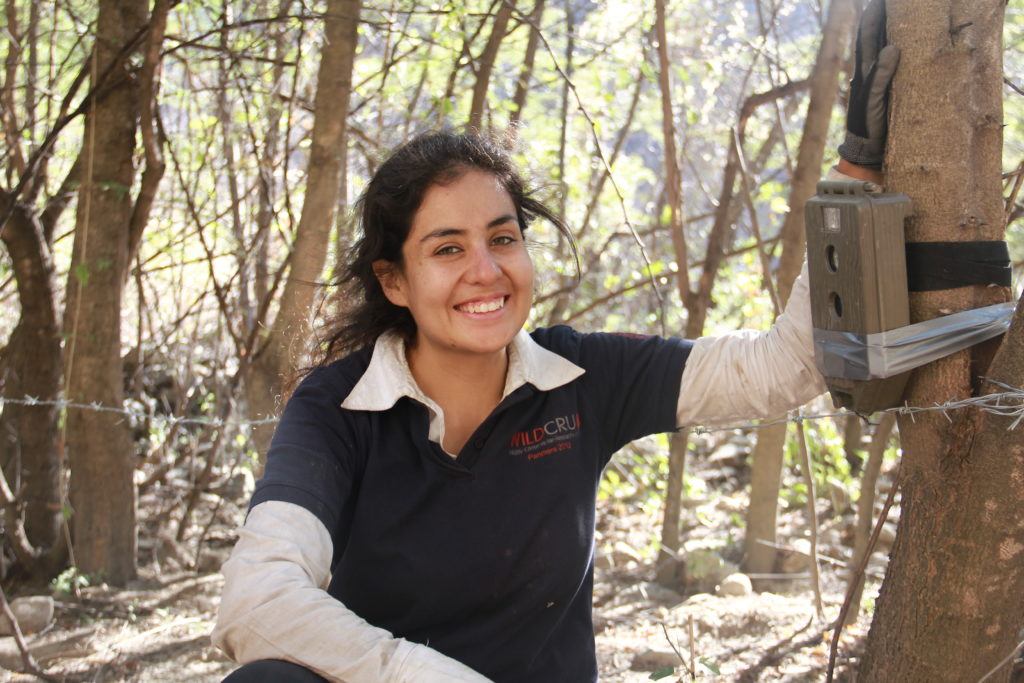 In the tropical dry forests of the Bolivian Andes, WCN 2019 scholarship recipient Carmen Julia Quiroga Pacheco looks up from her camera trap, alerted by the sound of crackling branches. She scans the trees, watching for movement as sunlight sifts through leaves, patterning her stark surroundings. Suddenly, she sees an Andean bear high up in a tree, reaching for ripe fruit. Julia pauses and watches in awe. Tomorrow, she will share footage of this Andean bear as well as images of pumas, jaguars, and other wildlife captured by her camera traps with local communities in the area.

Having seen firsthand the conflicts that arise when people and wildlife compete for space and resources, Julia believes the future of wildlife ultimately lies in the hands of the people who have to co-exist alongside them; to that end, Julia is building strong connections and raising awareness about Andean bears and other wildlife in the Bolivian Andes to help ensure their survival.

Growing up in a traditional Bolivian home in Cochabamba, Julia was surrounded by animals and exposed to deep-rooted Andean cultural practices. “I grew up watching people dressed as bears during the carnival and listening to folk stories about bears, which made me understand the cultural importance of the species,” she said. “At the same time, I was always surprised to hear very little about bear conservation and research in Bolivia.” This helped develop her strong interest in generating scientific information about the Andean bear and using it as an umbrella, keystone, and flagship species to conserve a much wider array of species and landscapes.

Julia earned her BSc in Biology and MSc in Conservation and Rural Development before pursuing her PhD program in Ecology at the University of South-Eastern Norway, focusing on co-existence between Andean bears, pumas, and jaguars in the dry forests of the Boliviano-Tucumano ecoregion. In her home country of Bolivia, Carmen is one of the few people studying to be a conservationist and the only woman pursuing a Ph.D. in the subject. After graduation, she plans to return to Bolivia and inspire young students to become the next generation of conservationists.

“Growing up in a country with a large gender gap in education and career opportunities, and where research is considered a hobby rather than a professional career, I am aware that future conservationists need role models and inspiration,” she said. “I would like to show them that it is possible to build a successful career in research and conservation.”