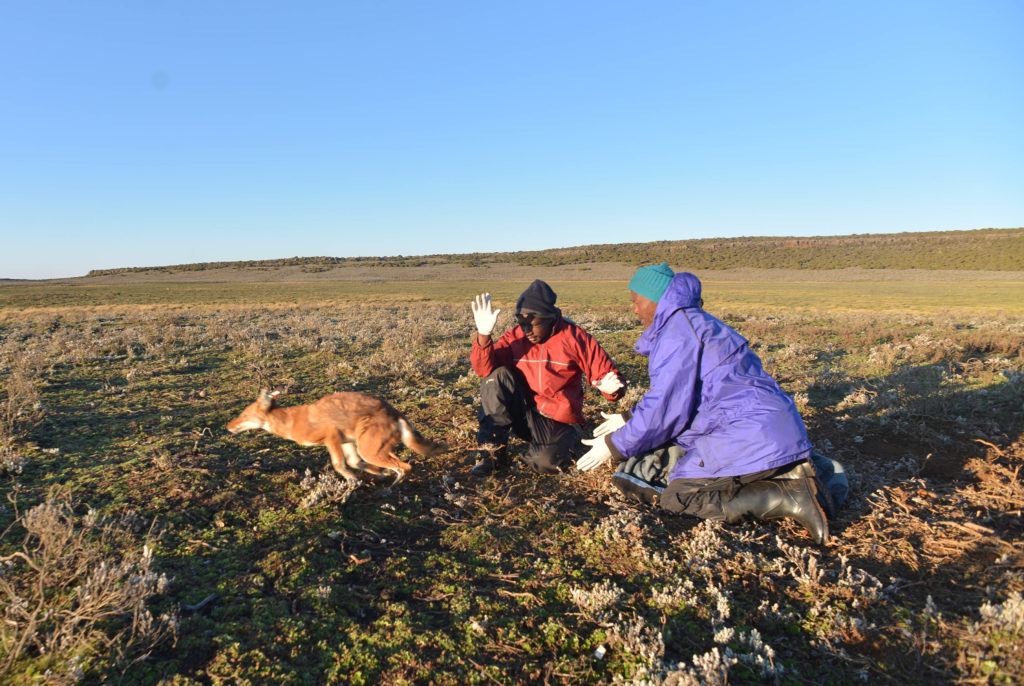 In Ethiopia’s rugged, wind-swept Bale Mountains, a rust-colored wolf cautiously approaches a chunk of fresh goat meat lying on the rocky ground. She sniffs the meat and raises her head, black nose quivering, amber eyes scanning the darkness. She devours the meat. Two fluffy red and white wolf pups emerge from behind a lichen-covered boulder. Seeing their mother feasting, they venture forward and join her in finishing off the rest of the goat meat.

Veterinarian and 2019 WCN scholarship recipient Muktar Abute, who has spent the evening strategically placing meat chunks containing oral rabies vaccine around the plateau, is halfway down the mountain trail by now. But in a few day’s time, he and his team from Ethiopian Wolf Conservation Program (EWCP) will return to collect video footage from the camera traps in the area; footage that will show this mother and her pups, and the other members of her pack, being successfully inoculated against rabies.

Only about 400 Ethiopian wolves are left in the world, in isolated regions of the Ethiopian Highlands. Diseases like rabies and canine distemper virus (CDV) can quickly spread from domestic and feral dogs roaming the mountains, causing sudden, significant crashes in already fragile wolf populations. Ethiopia has a higher incidence of rabies than most African countries, so it is critical to educate communities and vaccinate as many wolves and domestic dogs as possible. 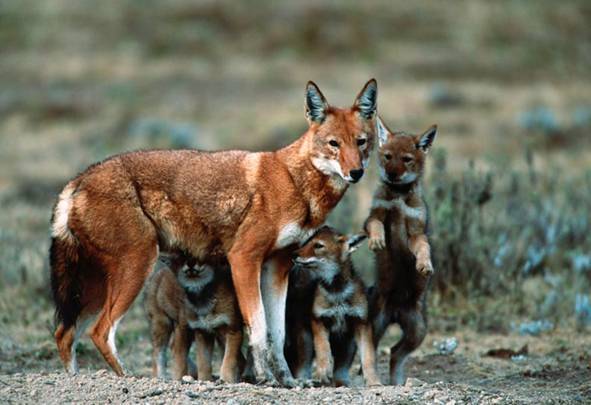 “After many years of education work, people are now happy to vaccinate their dogs,” Muktar said. “Every year, I vaccinate between 3,500 and 5,000 domestic dogs with my team. While not wildlife, this has a direct impact on reducing risks of disease transmission between dogs and wildlife, and it contributes to improving human health and lessening suffering.”

Growing up in Dinsho, Ethiopia, Muktar witnessed the slow disappearance of many species around his village due to habitat degradation from cattle grazing, crop farming, and poor management practices. He realized that conservation could not succeed without local community awareness and involvement.

“When I was young, I could hear and see Ethiopian wolves in Gaysay grasslands,” Muktar said. “They are not there anymore and this makes me very sad. This is probably what opened my eyes, and made me want to protect the Ethiopian wolf.”

Muktar joined EWCP in 2010 as a Veterinary Assistant, and in 2015 became EWCP’s Veterinary Team Leader, in charge of planning annual domestic dog vaccinations, managing the teams in the field, and leading reactive wolf vaccination interventions. Closely involved in research, he is particularly excited about improving oral rabies vaccine distribution to Ethiopian wolves. Upon graduating from Addis Ababa University with a Master’s in Veterinary Microbiology, Muktar will return to EWCP and work towards the development and government acceptance of a national disease management plan to protect Ethiopian wolves from rabies and CDV.

“In the meantime,” he said, “I plan to be a leader in disease awareness with the local communities, as science and government won’t be sufficient if the communities are not involved.”