WCN 2019 scholarship recipient and field biologist/ecologist Teddy Mukula kneels in the swaying golden grasses of Liuwa Plain National Park, Zambia, working quickly to repair a sleeping cheetah’s radio collar. As the slender cat’s chest gently rises and falls, Teddy pauses to admire the sheer beauty and athleticism of Africa’s most endangered cat. The cheetah’s deep golden fur with solid black spots gleams in the afternoon sunlight. Her long, powerful legs move slightly, as if responding to a dream of running. In a few minutes, this solitary female will wake up from the tranquilizer and be off again through the grasslands. Early tomorrow morning, while she is hunting – running 70 mph (113 km/hr) to catch up to a wildebeest – Teddy will be tracking her movements. He will share these details with students in the local school conservation clubs he has formed to help children develop their love of wildlife and gain conservation interest and experience. 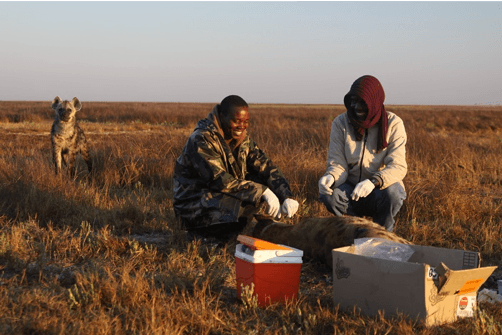 Teddy collars a hyena in the field.

As the world’s fastest land animal in a human-dominated world, the cheetah faces a unique challenge. Its thin frame, lean body, and long, lanky legs are perfect for bursts of speed when chasing prey like zebras and wildebeests. The cheetah’s smaller body size, however, cannot compete with that of larger carnivores, like lions, in protected parks and reserves. Most wild cheetahs, therefore, live on non-protected pockets of land throughout Africa, where farmers and rural communities view them as a threat.

“To me, cheetahs represent beauty, calmness, and persistence,” Teddy said. “Doing research work on cheetahs has improved my understanding of how vulnerable they are.”

Fewer than 7,100 wild cheetahs now live in the world (down from 100,000 – more than a 90% loss over the last 100 years). Listed as Vulnerable on the IUCM Red List, they now live in just 9 percent of their historic range, with most in Africa and fewer than 50 wild Asiatic cheetahs left in Iran. Human-wildlife conflict, disappearing habitat and loss of prey, and poaching and illegal wildlife trafficking (including wild cubs caught and smuggled in the exotic pet trade) pose the greatest threats. Fewer than 100 cheetahs now live in Teddy’s home country of Zambia, and the only stable – and second-largest population (20-25 cheetahs) – is in the Liuwa ecosystem. 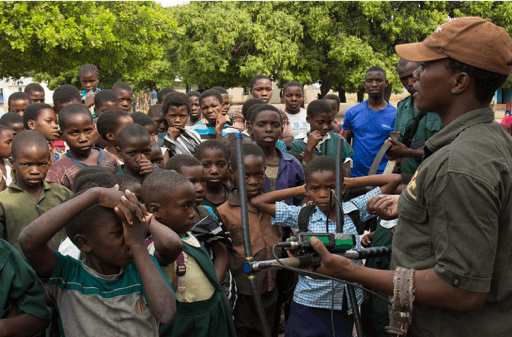 Teddy shares his passion for wildlife by spreading awareness for conservation with local children.

Growing up in Mungwi District, Northern Province, Zambia, Teddy saw his grandfather, a hunter, display many wildlife trophies demonstrating his hunting prowess. “As a child I saw nothing wrong, in that, after all, we fed on that,” Teddy said. “But with the exposure of school and TV such as National Geographic, I realized that some animals whose trophies even I saw, were threatened and endangered. I then made a commitment to myself to pursue conservation of these species.”

After high school, Teddy, who speaks six languages (English, Bemba, Chewa, Lozi, Tonga, and Spanish), interned with African Lion and Environmental Research Trust, where he got involved in elephant monitoring and community outreach. He earned his BS in Wildlife Management from the Copperbelt University, graduating with higher merit, then graduated from the University of Oxford as one of nine students worldwide awarded an opportunity to earn a post-graduate degree in International Wildlife Conservation Practice. Since 2013, he has worked as a field biologist/ecologist with the Zambian Carnivore Programme (ZCP), focusing primarily on cheetahs, but also including other carnivore species (spotted hyena, lion, and wild dog) and their primary prey (wildebeest, zebra and oribi). He typically works in remote areas of Zambia’s Mosi-O-Tunya, Kafue, South Luangwa, and Liuwa national parks, collecting population and behavior data through intensive monitoring with radio collars using ground and aerial telemetry, hunt follows, behavioral observations, and collection/processing of samples. His years of experience have built an array of managerial, political, community education, outreach, training, mechanical, and survival and camping skills that enable him to manage in diverse settings. He is now pursuing an MS in Fish and Wildlife Management/Ecology at Montana State University, with a focus on conservation biology and the dynamics of a threatened cheetah population in the Greater Liuwa ecosystem of Western Zambia. 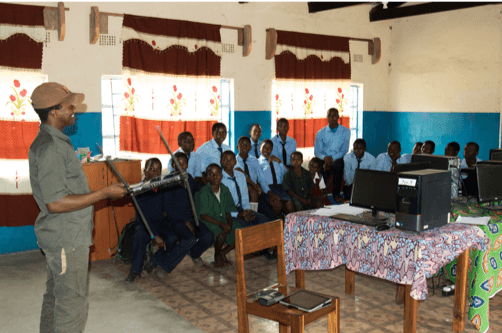 “The intrinsic value of wildlife is not fully understood and appreciated by many of our communities in Zambia,” Teddy said. “I have been interested in conservation to gain insight and spread knowledge to many people around me and beyond.”