Paul was laser focused on the rustling coming from the underbrush. He was part of a small group of conservationists watching with bated breath as a raccoon-sized Sunda pangolin rummaged for its lunch along the ground. The group was in the forested outskirts of Singapore, the island’s relentless humidity clinging like a second skin. Just a heartbeat away was the city proper, a transit point in the global illegal trade that is decimating pangolin populations. They had only a few moments before the pangolin, timid and elusive by nature, withdrew back into the forest.

Though Paul Thomson—WCN’s Director of Conservation Programs—has been working for their protection for over a decade, this was the first time he had seen a wild pangolin. He was struck by how heartbreakingly fragile it appeared. A sad irony for an animal whose defining feature is its scales; pangolins are armored like medieval knights suited and ready for battle. As the world’s most illegally trafficked mammals, pangolins are indeed fighting for their lives, and it’s a battle they cannot fight alone. This is why Paul co-founded Save Pangolins 10 years ago and why in May 2019, WCN and Save Pangolins, in partnership with the Leonardo DiCaprio Foundation, launched the Pangolin Crisis Fund. 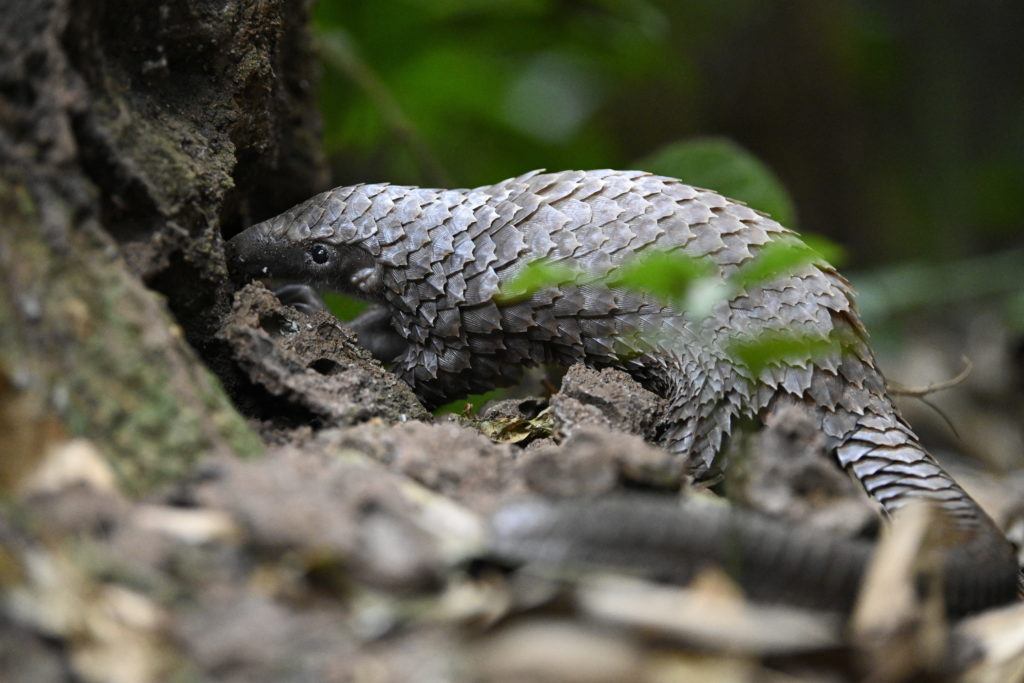 A black-bellied pangolin rummages through the forest.

When threatened, a pangolin rolls into a protective ball, a tight circle of overlapping scales impenetrable even to a lion. But this defense is no match for a poacher’s grasp; a balled up pangolin is easy pickings. Throughout Asia, pangolins are in demand for their meat, considered a delicacy, and for their scales used in traditional medicine. All eight species of pangolins in Asia and Africa have been declared threatened with extinction. Since 2014, more than 1 million pangolins globally have been slaughtered, traded, and consumed. And this is likely just the tip of the iceberg. A pangolin crisis is undoubtedly upon us.

Compounding this crisis is a lack of public awareness that deprives pangolins of the champions, resources, and funding needed to end the trade that threatens their survival. The Pangolin Crisis Fund hopes to sound the alarm to garner broad support for this struggling species while empowering conservationists’ efforts to protect pangolins and offering opportunities to strengthen their work through collaboration. Modeled after the Elephant Crisis Fund and Lion Recovery Fund, the Pangolin Crisis Fund will invest in projects to stop the poaching of pangolins, stop the trade and demand for pangolin products, and raise the profile of this little-known animal.

Pangolins might be the fragile underdogs right now, but it’s not too late to save them. The Pangolin Crisis Fund offers a way to galvanize the support urgently needed to quickly and permanently end the illegal trade, ensuring a future for this endearing species. We can do more than root for the underdogs, we can help them win.