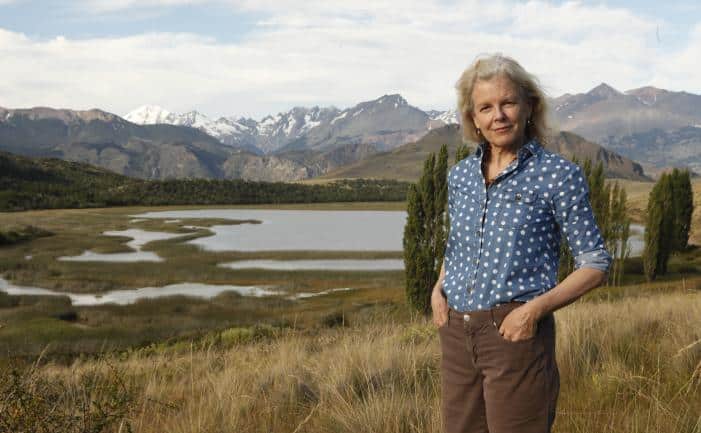 As a fourth-generation Californian from a ranching family based in Ventura, Kristine (Kris) McDivitt Tompkins describes herself aptly when she says, “I’m not an urban girl.”

Kris’s childhood revolved around wild landscapes and open spaces. After graduation in the early 1970s, her passion for the outdoors propelled her to help her friend Yvon Chouinard, a rock climbing legend, turn his growing climbing equipment business into Patagonia, Inc., one of the largest producers of outdoor equipment in the world.

During her 20 years with the company, Patagonia, Inc. gained a reputation for being both a great retailer and a force for social good, an “anti-corporation” that helped combat the world’s environmental crises of pollution, deforestation, and the disappearance of fish and wildlife.

In 1993, she retired from Patagonia, Inc. and married climber/entrepreneur Douglas Tompkins—the co-founder of the outdoor company The North Face, and co-founder of Esprit—and the two of them embarked on a new adventure, filled with mountain expeditions, descents of rivers, and the exploration of pristine landscapes. This led them to their next initiative, and what would eventually become a lifelong mission, the creation of Tompkins Conservation. Their goal was to focus their experience and vast resources toward protecting the planet.

Kris and her late husband (who died in 2015) became the most ambitious and successful national park-oriented philanthropists in history, helping to secure millions of acres of new parklands in Chile and Argentina. Their decision to shift from entrepreneurs to environmental advocates couldn’t have happened at a better time.

Our planet is facing a crisis. Currently the world population stands at 7.5 billion and it is predicted that by 2050 our numbers will cross the 10 billion mark. More and more of our wild landscapes are being cleared to make room for our burgeoning numbers. In doing so, we’re not just destroying the habitats of the myriad wildlife that live, feed and breed within these habitats, we’re also throwing our planet’s fragile balance between man and nature off-kilter.

Thankfully, with people like Kris in nature’s corner, there is a chance we can reverse this worrying trend. Since its inception, Tompkins Conservation has been responsible for the creation and successful implementation of a diverse range of conservation initiatives in the region of Patagonia—creating parklands, restoring degraded lands, conserving biodiversity to keep the landscape healthy, reintroducing missing native species like tapirs and giant anteaters, encouraging environmental activism, and promoting ecological agriculture, for over 25 years.

Their overarching goal is to restore and re-wild landscapes throughout Chile and Argentina, and convert them into national parks. This involves reversing the decades of unsustainable livestock grazing and farming that has eroded the land for generations. They seek to provide local communities with viable economic alternatives related to conservation and ecotourism in order to move away from unsustainable ranching or resource extraction.

After Doug’s sudden death in 2015, Kris has shown no signs of slowing down. If anything, she’s more motivated than ever to realize their vision and has plans to create at least six more national parks and expand several others within Chile and Argentina. She and the rest of the team at Tompkins Conservation are determined to protect the breathtaking natural landscapes we cherish, despite the growing threats to our planet and its wild places.