What if I told you that, deep in the jungles of Southeast Asia, there lives an antelope-like ox, a tiger-striped rabbit, and a deer with vampire fangs? You would be forgiven for thinking that my imagination had run wild! But these remarkable animals do roam the rainforest of the Annamite Mountains of Vietnam and Laos. And they are found nowhere else on the planet. 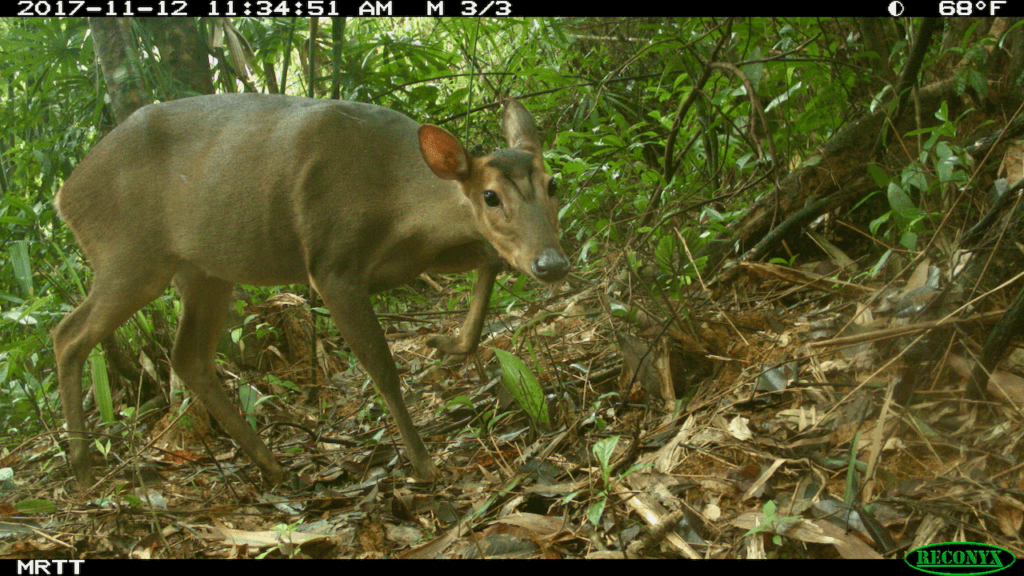 A female large-antlered muntjac in Vietnam.

Unfortunately, all of these species are also threatened. Animals like the saola and large-antlered muntjac are critically endangered and in need of urgent conservation actions to prevent their imminent extinction. Others, like the Annamite striped rabbit, crested argus, and Owston’s civet are not far behind. 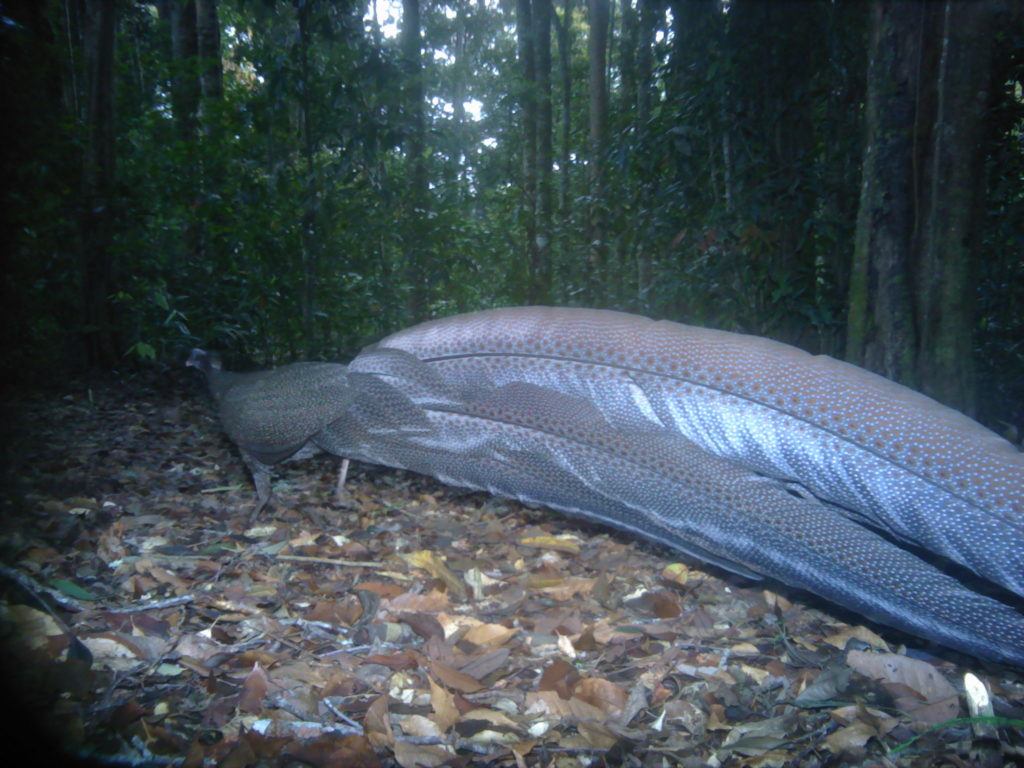 A crested argus struts through the forest.

Why are these Annamite species so threatened? The main reason is unsustainable hunting from wire snares. Much like drift nets in oceans, snares capture any animal unfortunate enough to encounter them. Over time, high levels of snaring have emptied many Annamites forests and pushed these species towards extinction. 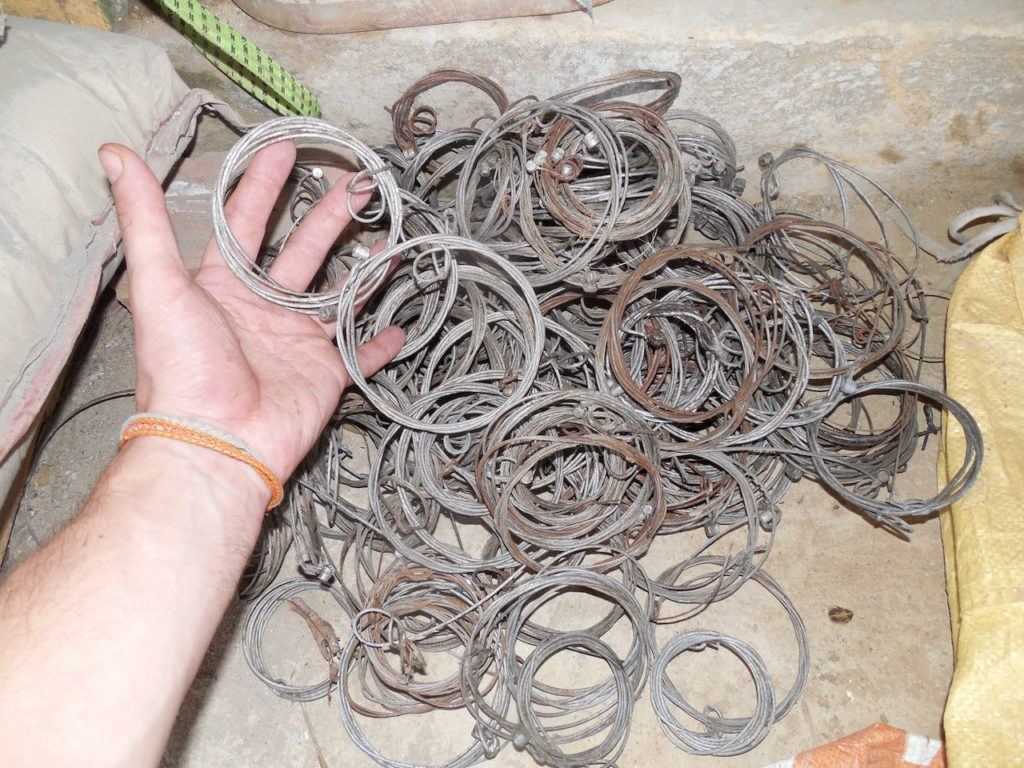 A pile of wire snares removed in a single day’s walk from one of Vietnam’s national parks.

Most poachers don’t set snares to feed themselves. Rather, they capture animals that are then sold to local restaurants as a part of the thriving bushmeat industry in Vietnam and Laos. This has created an almost inexhaustible demand for wild meat.

To save the rare species of the Annamites, we need a multi-faceted approach. In the short term, we need to reduce snaring pressure in key areas. Several NGOs are leading snare removal efforts with local government counterparts, and have accomplished some astounding results. For example, snare removal teams with WWF-Vietnam have removed more than 100,000 wire snares from two reserves in central Vietnam. 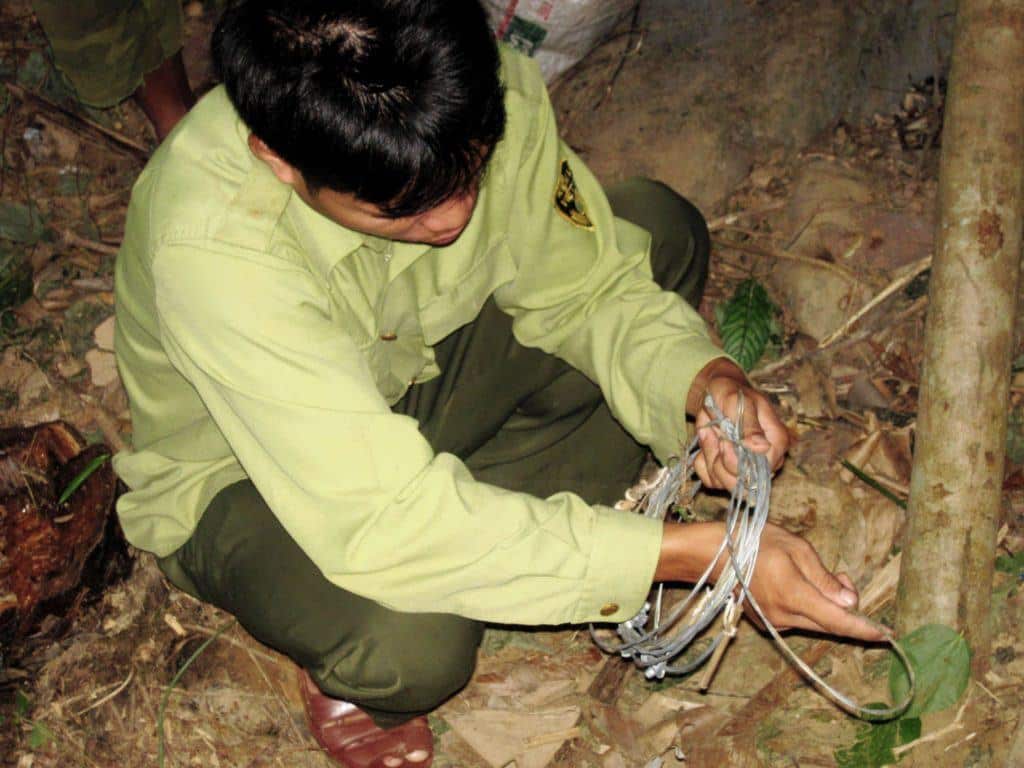 A forest ranger removing wire snares from a protected area.

But for very rare species like saola and large-antlered muntjac, snare removal is not enough. These animals are so few that it is unlikely that we will reverse the tide of snaring quickly enough to save them, and even if we did, their populations may no longer be viable. For these species, we need to establish urgent breeding populations. Plans are now underway to create a conservation breeding center in Vietnam. It will then be a race against time to preserve these animals before they slip into extinction. 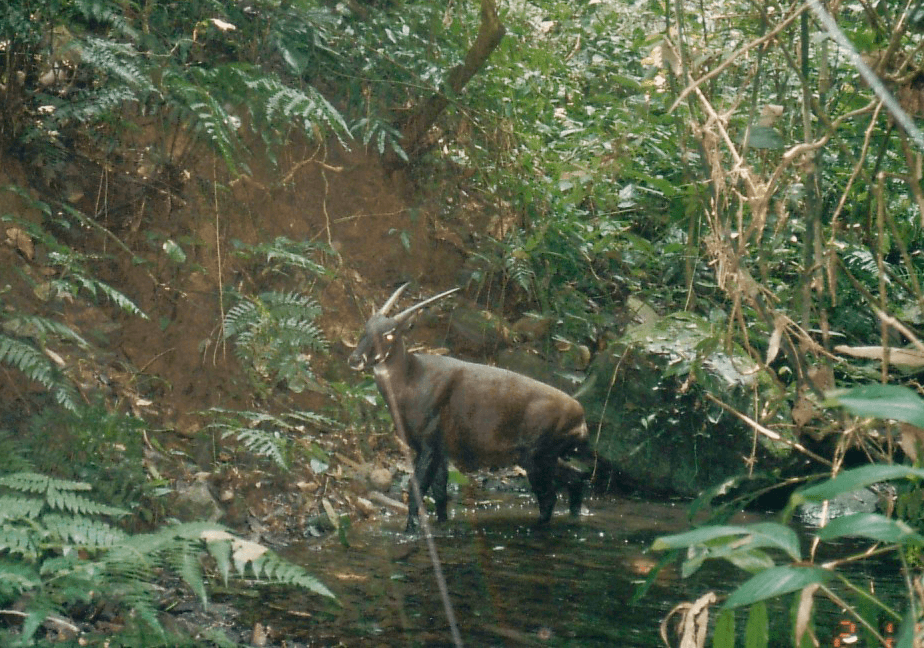 A saola wading through water.

In the long term, it is important to strengthen protected area management and reduce consumer demand for wild meat in Vietnam and Laos. These are difficult tasks, but with appropriate levels of government support and widespread education and outreach, these major societal shifts are possible. 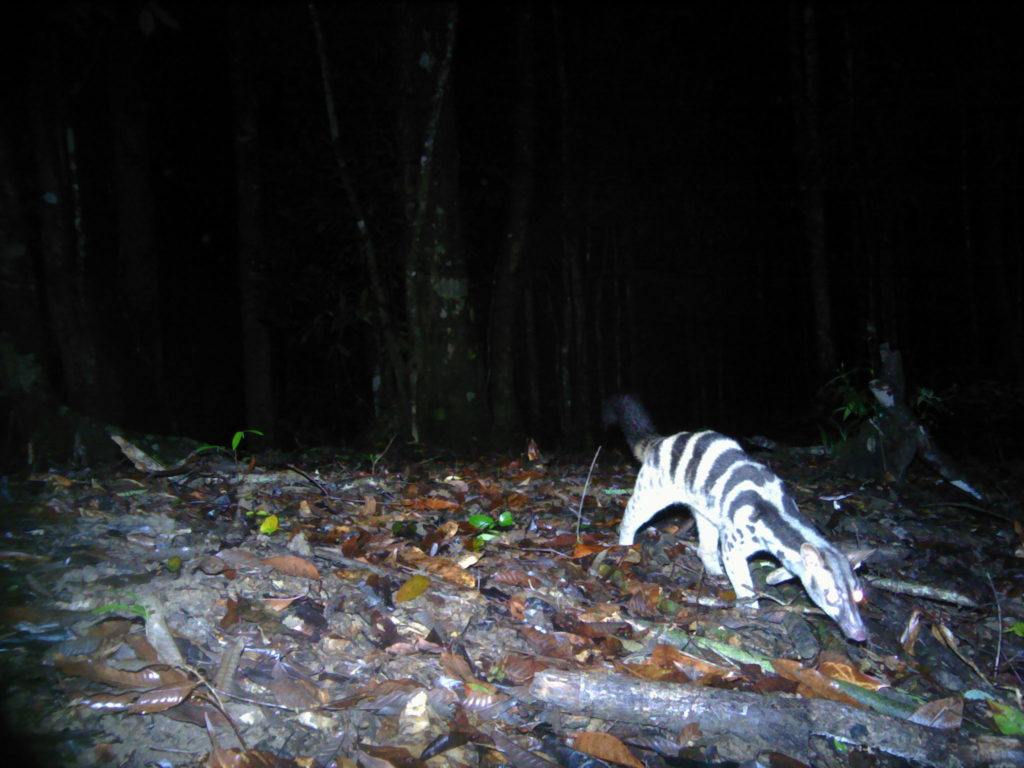 An Owston’s civet sniffing along the forest floor at night.

We must also encourage the development of the next generation of conservationists in the region. Fortunately, organizations like WCN play a critical role in this process through their Scholarship Program. Now, young people like An Nguyen have an opportunity to pursue a career in conservation, and eventually change the way that conservation is staged in these countries moving forward. 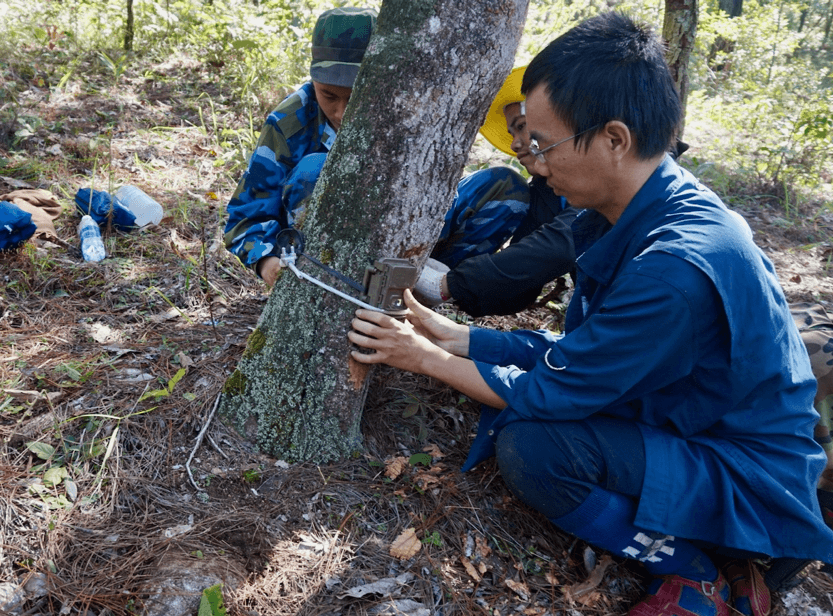 By working together, we can save the wonders of the Annamites. Whether you are reading this in a major city in the United States, a small town in rural Vietnam, or anywhere in between, you can help us protect these amazing species by sharing their story, supporting conservationists like the WCN Scholars, or by supporting IUCN Specialist Groups (like the Saola Working Group) that are dedicated to saving these rare animals. 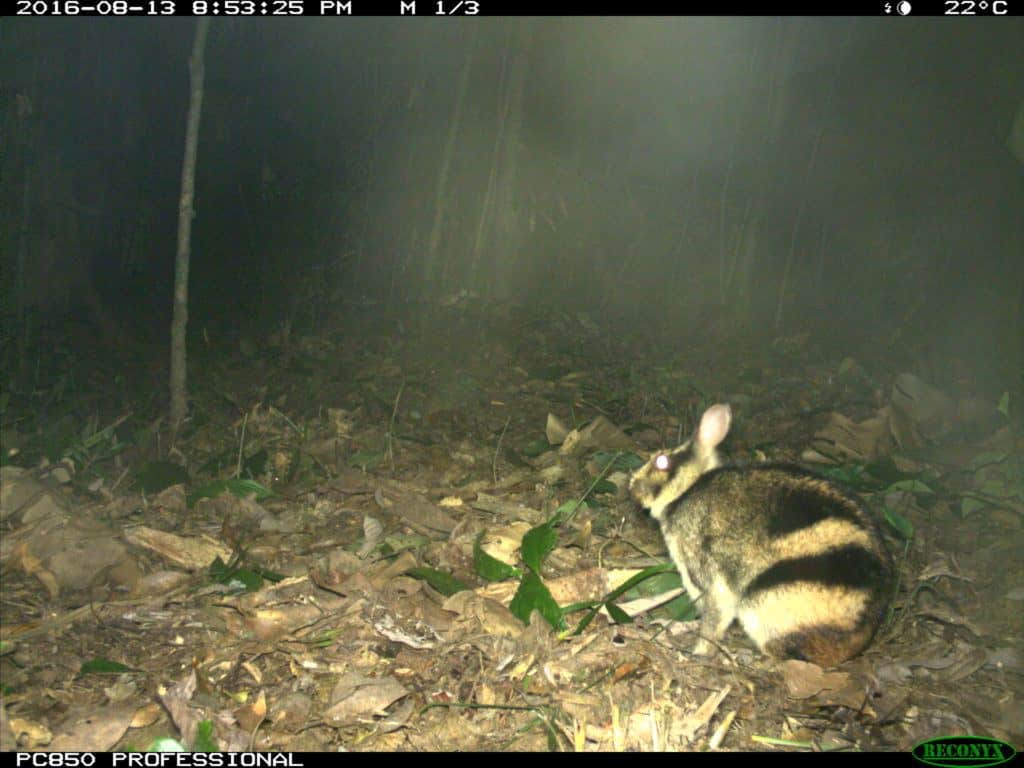 About the Author: Andrew Tilker is Asian Species Officer for Global Wildlife Conservation. He is also chair of the IUCN Large-antlered Muntjac Working Group, co-chair of the Striped Rabbit Working Group, and a member of the Saola Working Group. Andrew is especially interested in the conservation of Annamite endemic species in Vietnam and Laos.