In the estuarine waters of Panama’s Darién Province, the pulse of the river lulled Hayro Cunampio’s boat into a soothing rhythm. He leaned over the side in the comfortable grasp of the current, hauling up a net with his cohort of local fishers. But the hypnotic channel wasn’t the only thing making this moment feel like a dream—they had captured a largetooth sawfish, one of the rarest rays found in these murky waters. As a Community Officer for MarAlliance, Hayro knew this encounter would create far-flung ripples for MarAlliance’s research and advance their efforts to teach local fishers the value of protecting rare marine wildlife. 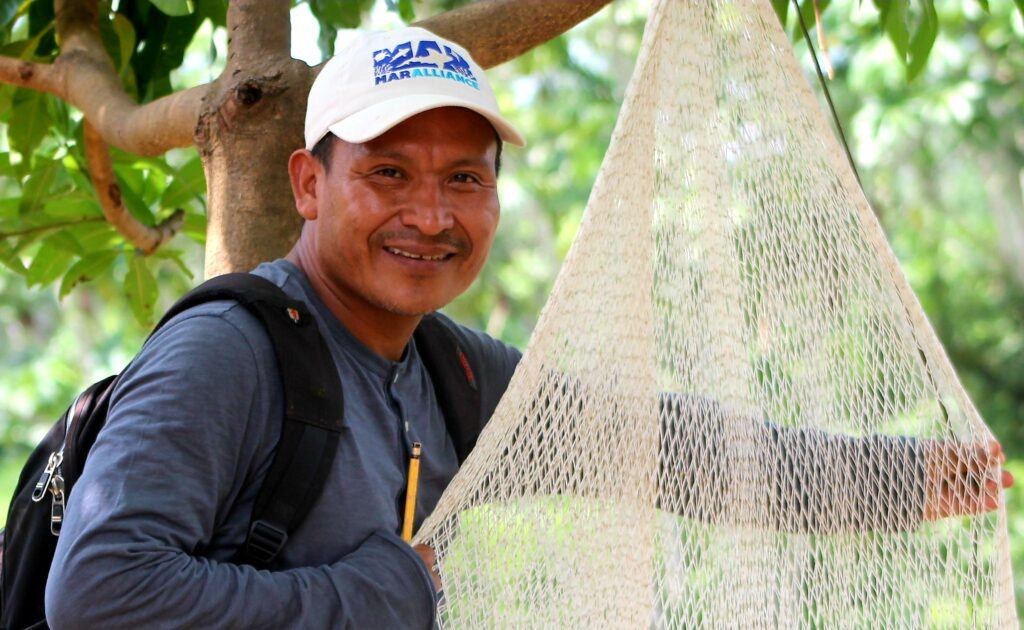 Sawfish were once regularly spotted along both of Panama’s coasts, but for many years, sightings of this peculiar ray have occurred with the infrequency of comets. This particular sawfish was the only one of its species to be caught by a research team in Central America in over 20 years. Hayro and the fishers named the sawfish Aba, which means “one” in the Emberá language. At just over one meter long, Aba was still a juvenile; sawfish reach maturity at around three meters long, so assessing a young male like Aba offered MarAlliance the opportunity to study the species early in its lifecycle. 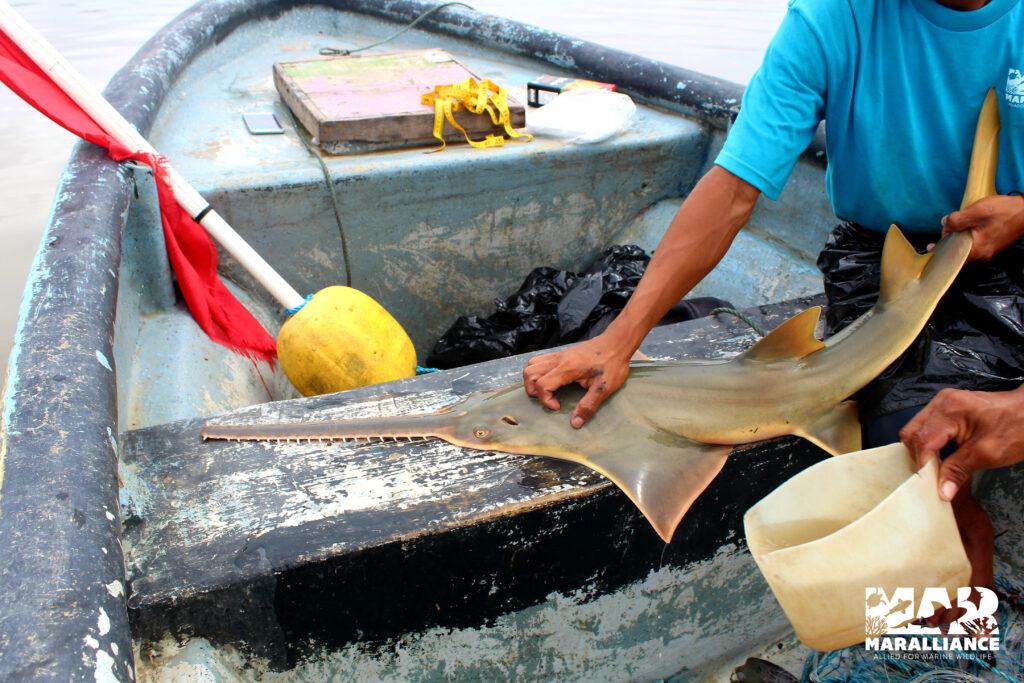 Aba is the first largetooth sawfish handled by researchers in Central America in over two decades.

Despite his youth, Aba still possessed the sawfish’s most captivating feature—a chainsaw-like protrusion, known as a rostrum, adorning his face. Yet this distinctive feature is also one of the main reasons that sawfish have declined—fishers have overwhelmingly depleted their populations, often accidentally and sometimes intentionally. Sawfish rostra are lined with teeth, which can easily get entangled in gillnets designed to indiscriminately ensnare large quantities of fish. These teeth are also used to create spurs for rooster fighting, making sawfish rostra a highly prized item. To halt these harmful activities, Hayro has spent countless hours getting to know fishers one-on-one in many Darién communities, educating them about endangered marine wildlife. He has developed a network of local fishers committed to protecting sawfish and trained to safely release them when caught. 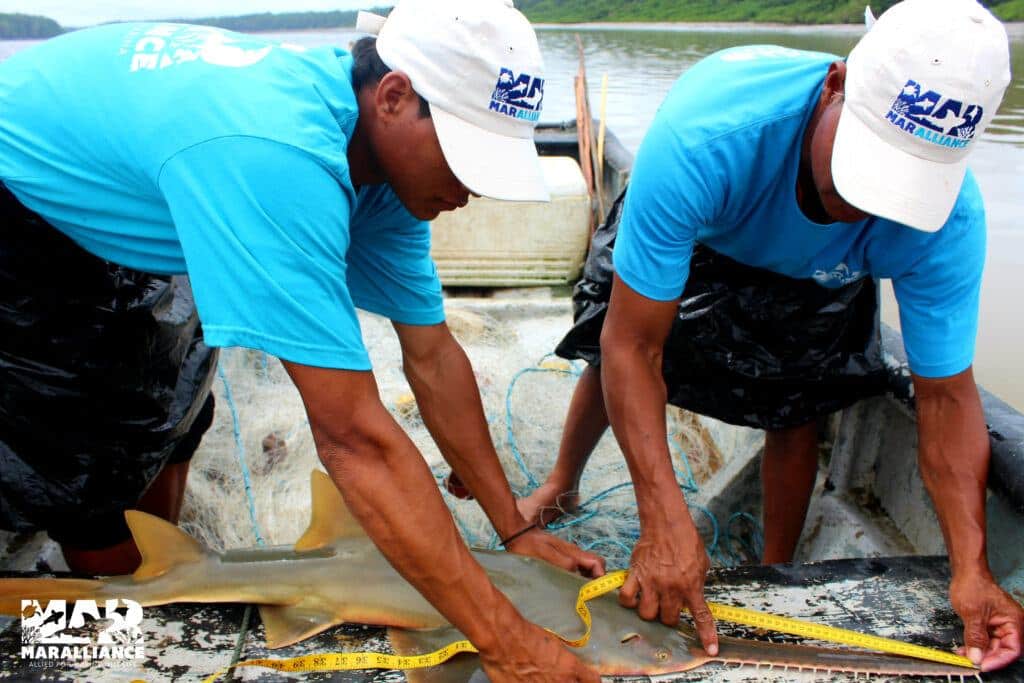 MarAlliance was able to gather valuable data from Aba before releasing him.

The dedication and expertise of these fishers has helped MarAlliance better understand sawfish ecology and where they can be found. When Aba was discovered, Hayro collected valuable measurements and tissue samples for genetic analysis while also showing the fishers how to do the same. Fishers throughout the region have shared stories with MarAlliance about six other sawfish found in the past year, helping Hayro’s team map out critical sawfish habitat in Panama’s mangroves and coastal areas. And thanks to Hayro’s influence, these fishers, who may have previously killed the sawfish, are now releasing them and gathering crucial data to help conserve the species. 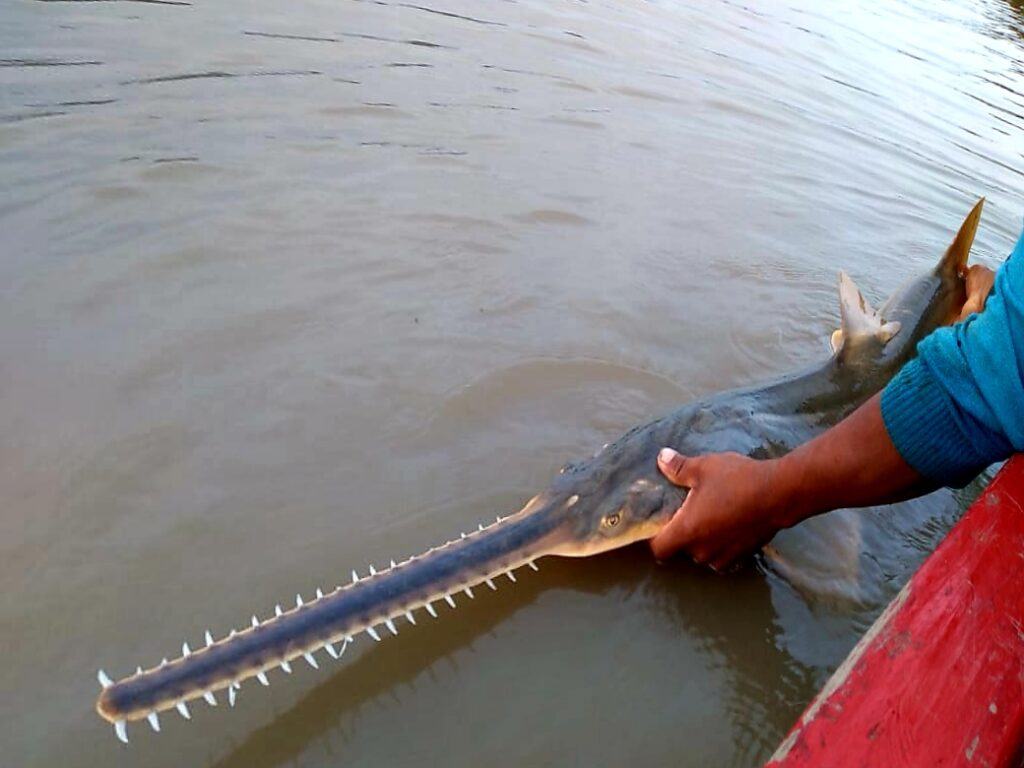 Largetooth sawfish, like the one above, were once common in Panama, but years of unchecked fishing have caused their populations to dwindle.

As he lowered Aba back into the river and watched the young ray disappear beneath the surface, Hayro knew that his team had now proven that Darién Province’s rich biodiversity did not end at the shore. MarAlliance continues to build awareness for sawfish, promote its recovery, and train fishers with conservation techniques throughout one of the last homes of this unusual species.