The rhythmic din of helicopter rotors faded from Dr. Deo Ruhagazi’s mind as Rwanda’s beautiful landscape stretched out before him like a painting. Brief turbulence jostled the aircraft as his team continued their aerial survey 100 ft. above ground. Below, they spotted what they’d been searching for—a flock of grey crowned cranes decorating the sky, which they added to their tally. The Rwanda Wildlife Conservation Association (RWCA), one of WCN’s newest Conservation Partners, has conducted annual censuses of crane populations for the past five years. Their recent findings are giving them hope for the future of these graceful birds. 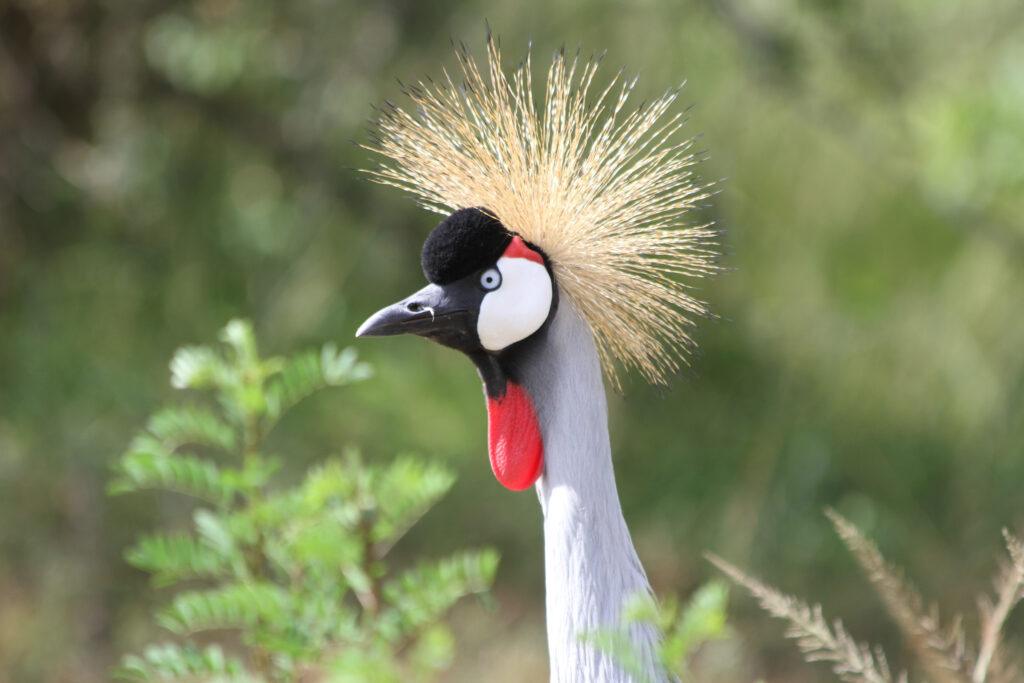 In 2014, there were more captive grey crowned cranes in Rwanda than wild ones. RWCA spent years rescuing captive cranes, rehabilitating and releasing most of them. There are no longer any captive cranes on display in private homes or hotels in Rwanda.

It wasn’t long ago that wild grey crowned cranes had nearly vanished in Rwanda. When RWCA was formed in 2014, the country’s wild crane population was estimated between 50 and 300 individuals. Numbers had plummeted due to people keeping captive cranes in their homes as ornamental signs of social status. RWCA collaborated with the government on an extensive campaign to recover and reintroduce these cranes to the wild; once complete, the team’s focus shifted to anti-poaching and population monitoring to confirm these rewilded cranes were thriving. They conducted their first census in 2017, locating 487 cranes across the country. Nearly every year since, this number has grown. In 2021, RWCA’s findings were remarkable—there were nearly 1,000 wild cranes in Rwanda, more than double the original population when their work first began. 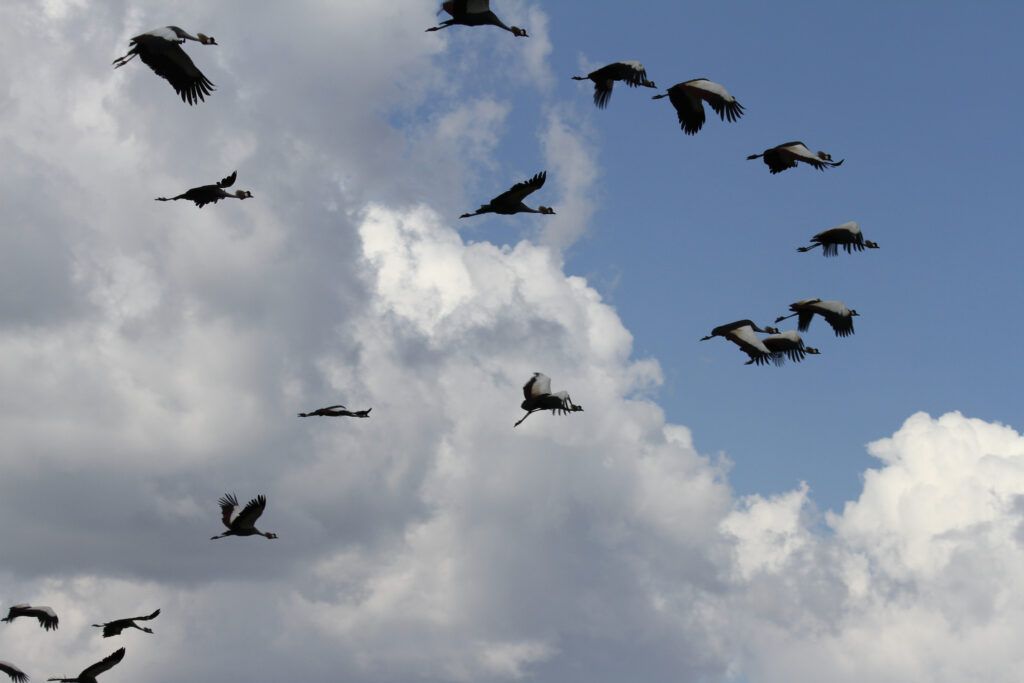 These encouraging results highlight the effectiveness of RWCA’s interventions to protect the cranes. Each census lasts for three days, and to ensure all collected data is comparable, RWCA prioritizes consistency—same team, same route, same time each year. Deo’s team takes to the skies and surveys remote areas with the highest concentrations of cranes, such as Akagera National Park, recording GPS coordinates for all sightings. Meanwhile, RWCA’s ground teams use binoculars to count the birds and record data in a tracking app. They also employ over 80 members of surrounding communities to help conduct censuses and monitor cranes throughout the year, even providing them with bicycles to cover more ground. 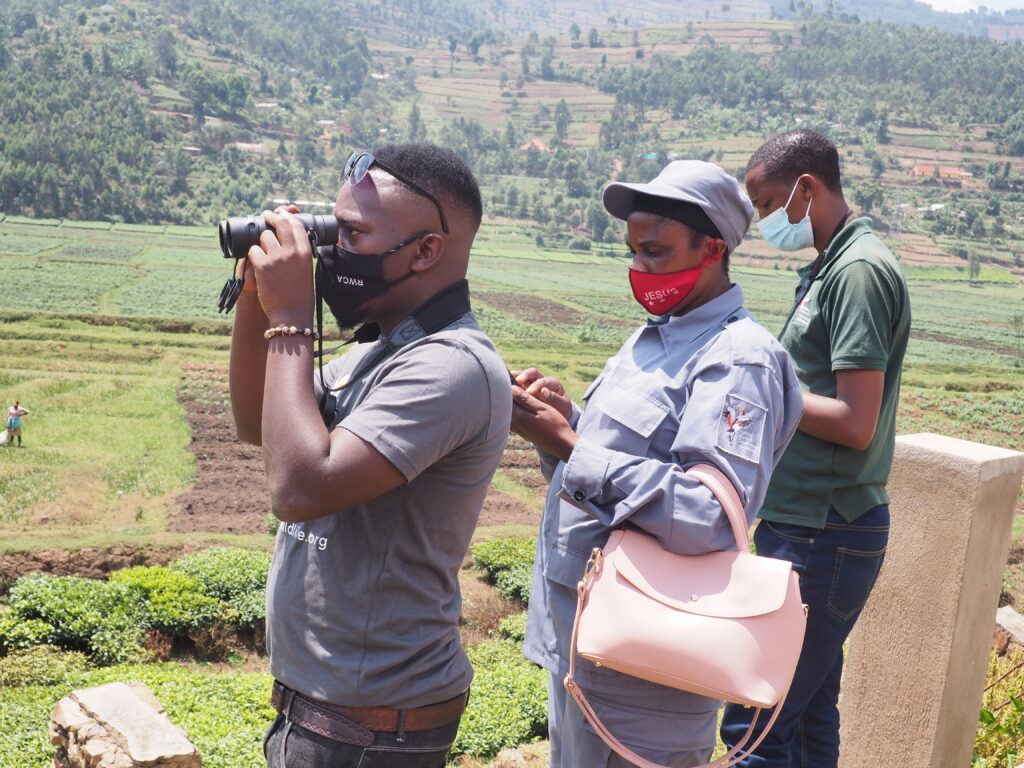 RWCA staff conducting the ground portion of the crane census.

Census data is essential to RWCA’s efforts to monitor crane population health. In addition to the number of cranes, censuses inform them about the age of most wild cranes, their preferred habitats, and their behavior for nesting, foraging, and breeding. Their most recent census recorded 65 breeding pairs with 131 chicks—an increase from previous years, suggesting that RWCA’s strategies are keeping the population moving in a positive direction. Ongoing monitoring by the community also helps RWCA respond immediately to poaching threats, as they did in 12 cases last year. All data gathered through these activities is shared with scientists to deliver a more accurate and nuanced status of grey crowned cranes in Rwanda. 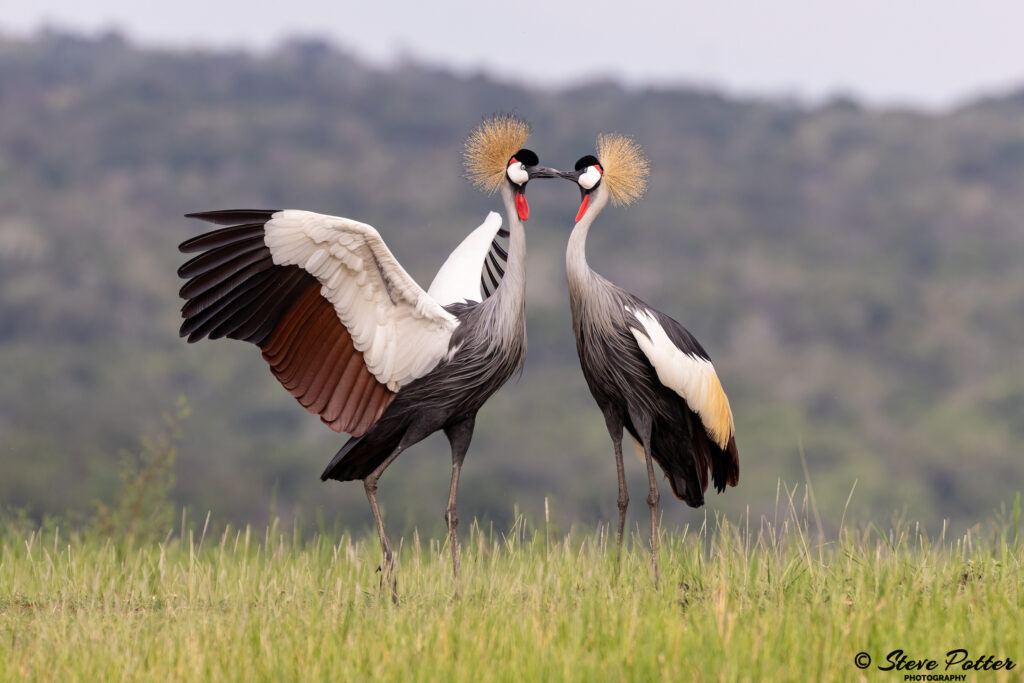 A pair of cranes in Akagera National Park.

RWCA hopes to expand their censuses into Tanzania and Uganda, since GPS data from tagged cranes indicates that they often venture between the three countries. Deo and his survey teams are partnering with these neighboring countries to design similar protective actions for cranes there. Above all, RWCA’s censuses prove that cranes can successfully recover long-term when community-led conservation efforts are deployed.