Whenever African elephants are mentioned, it is understandably the savannah elephant (Loxodonta africana) that receives all the headlines. Ask any child in the world and they would probably be able to identify one from a line-up. I doubt many of these children, let alone most adults, are aware that there are two different species which inhabit the African continent.

The magnificent, intelligent, and highly endangered forest elephant (Loxodonta cyclotis) made headlines in March this year when the International Union for Conservation of Nature (IUCN) updated its status to critically endangered. Their population is believed to have declined a staggering 86% in just 31 years. Yet most people would be forgiven for not knowing about them. Despite being recognised as a separate species by some experts since 1900, this year marks the first time IUCN has declared forest and savannah elephants as two distinct species. 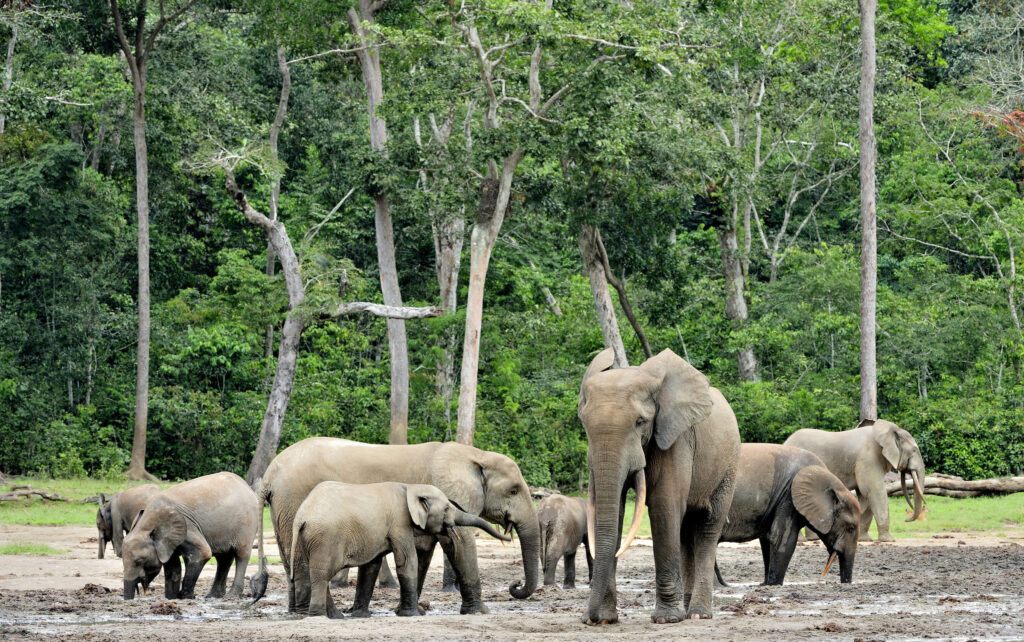 Elephants are elephants, so what?

According to genetic analysis, forest elephants and savannah elephants diverged from their common ancestor around 5.5 million years ago. This is around the same time Asian elephants split from the woolly mammoth (Mammuthus primigenius) and as humans split from chimpanzees. The two species have therefore been living separately for a very long time.

A close inspection of forest elephants reveals they are morphologically quite different too. Compared to their savannah cousins, their tusks are much straighter, thinner, and direct mainly downwards. Their ears are smaller and more rounded, and their forequarters are lower than their hindquarters, making forest elephants’ bodies more compact. Having lower forequarters is a trait shared with other rainforest dwelling mammals of Central Africa, like the striking and enigmatic Western Bongo (Tragelaphus eurycerus). This allows them to move around the rainforest so effectively that they seem able to melt away in a moment, and it is partly why they have been so understudied. 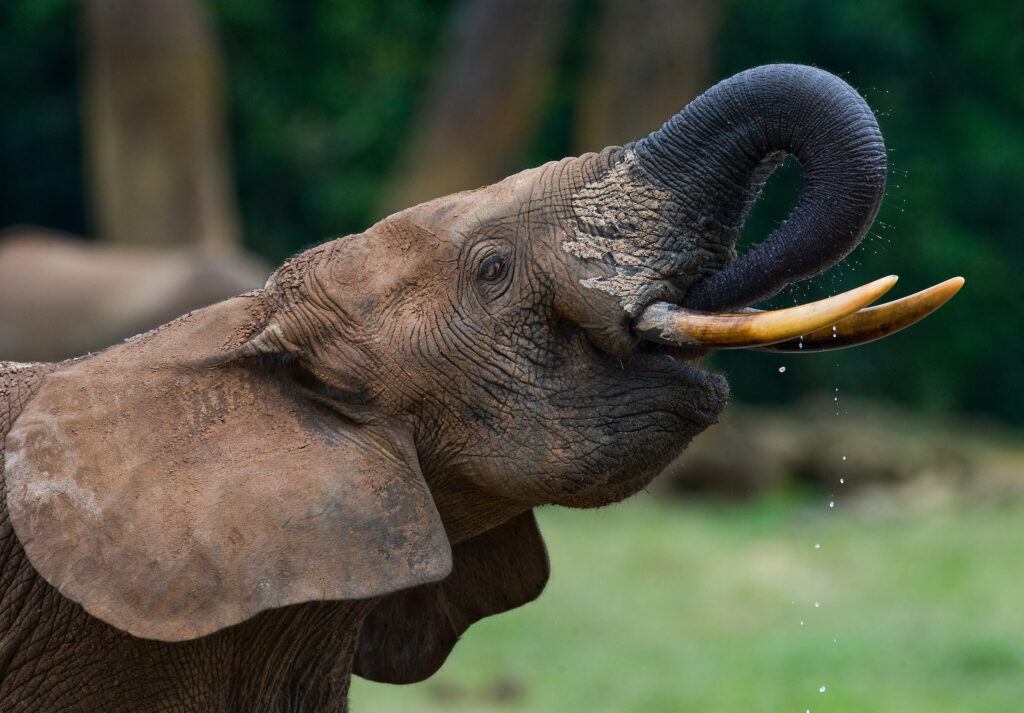 One of the main reasons scientific bodies like IUCN have only just defined forest elephants as separate species, is that they have been known to produce fertile hybrids with savannah elephants. Observed in eastern Democratic Republic of Congo, western Uganda and parts of West Africa, hybridisation is quite a divisive topic amongst geneticists and taxonomists. It is often said that truly distinct species cannot interbreed. However, paleogeneticist Dr. Eleftheria Palkopoulou points out that reproductive hybrids amongst closely related mammals are not unprecedented, furthermore she stresses that the “capacity for hybridization is the norm rather than the exception in many mammalian species over a time scale of millions of years”.

Forest elephants occur in the tropical rainforests of Central Africa and in fragmented habitats in West Africa. They have been observed living in savannah environments in many areas including Gabon and West Africa, and just to make things more complicated, savannah elephants are known to live happily in forests in Kenya and elsewhere. 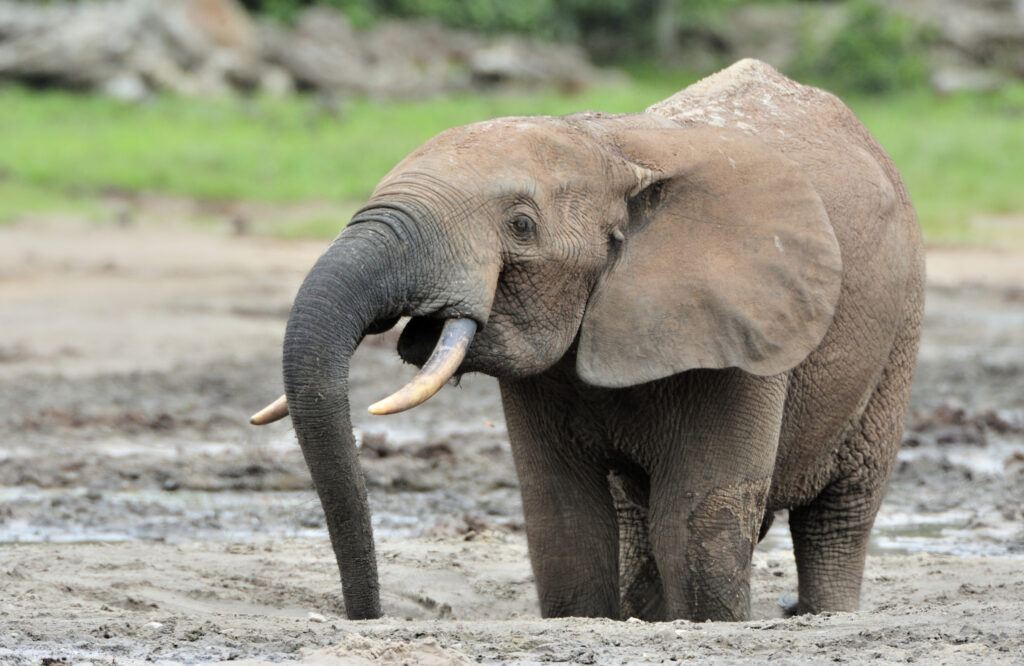 Gabon is home to the largest population of forest elephants. Although a diminutive country by African standards, around 88% of its landmass is covered by forest. However, a recent study estimates that in just the span of one decade from 2004-2014, the population in Minkébé National Park declined by 78-81%, a loss of more than 25,000 elephants. This amounts to almost seven elephants killed every single day for ten years, and serves as a stark warning that nowhere in Central Africa can be considered truly safe from poaching. 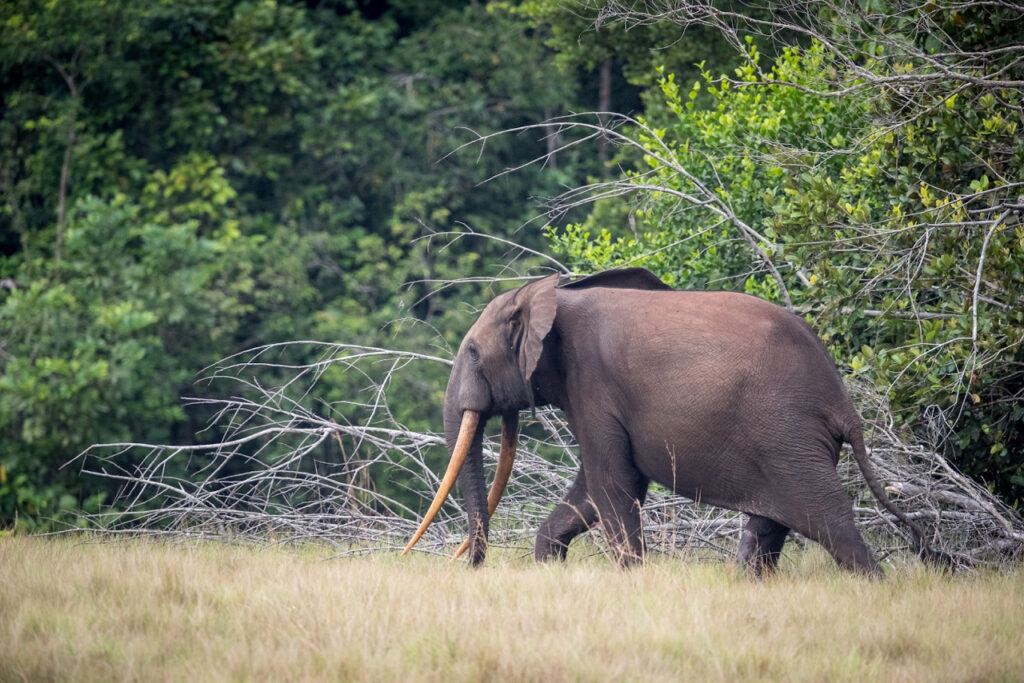 Because they spend most of their time in small family groups of 3 to 4 female relatives, with the males roaming the forests by themselves, they can be very difficult to study. Most observations are therefore limited to forest clearings known as “bais”, a word from the Babenzélé language spoken by the nomadic pygmy peoples who also inhabit these forests. In Dzanga Bai (meaning “village of the elephants”) in the CAR, it is not uncommon to be able to observe sixty to seventy elephants congregating, interacting, and feeding in what is one of nature’s greatest spectacles.

The architects of these fragile amphitheatres of Eden are of course the forest elephants, who excavate and compact pits with their tusks and feet. These clearings are in turn frequented by many different species seeking out the water, minerals, and clay soils the elephants unearth. The disappearance of these gentle giants would herald the end of these vital rainforest oases, impoverishing the entire ecosystem as a result. 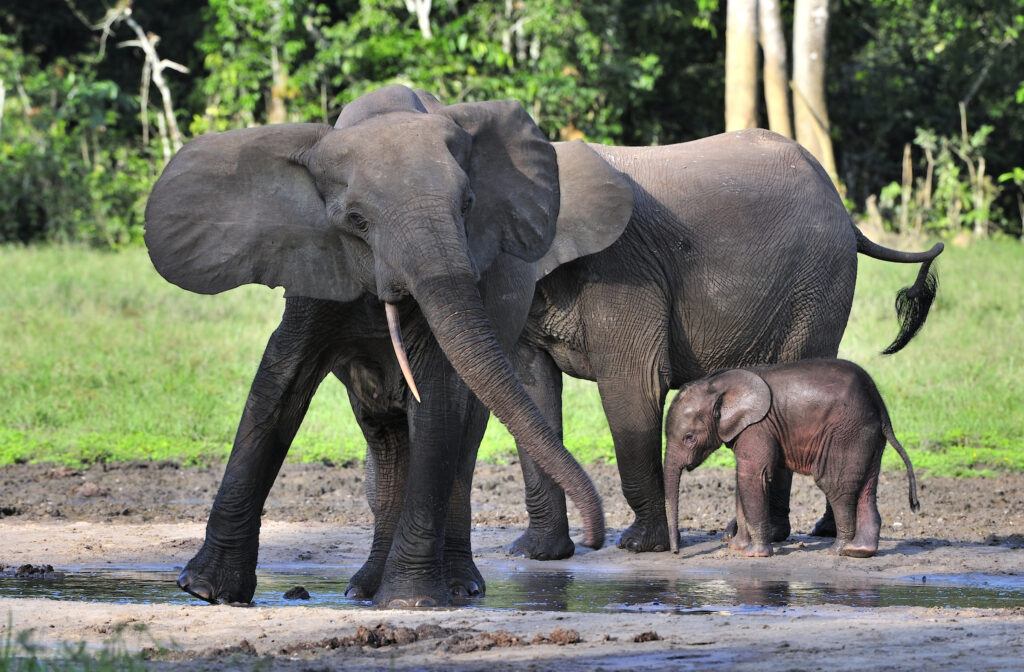 The great rainforests of Central and West Africa provide forest elephants with a vast larder to choose from. Their frugivorous predilection means they consume the most diverse range of seed species compared to any other rainforest dwelling mammal. They then disburse these seeds often several kilometres from the parent tree. Many plant species rely on elephants for their distribution, and so these elephants play an integral role in the maintenance of forest structure and diversity. Their excellent excrement is responsible for the planting of over a hundred species of plants and trees which in turn support a myriad of other invertebrate, avian, and mammalian rainforest life.

It is little wonder they are dubbed the “mega-gardeners” of the forest, and they maintain it mostly by breaking it. Opening areas by knocking down trees, trampling vegetation, and stimulating decomposition by shattering rotting logs. The absence of this constructive destruction would bring about severe shifts in the stability of Africa’s rainforests, which in turn would affect the lives of innumerable species that share these habitats. 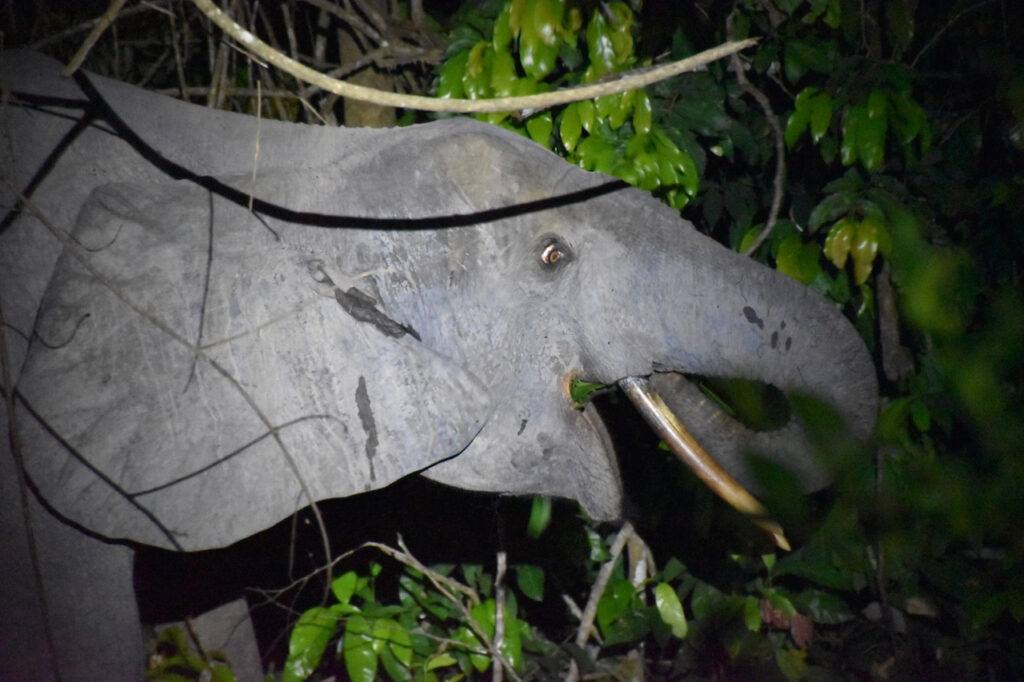 Impact on our lives

One of the species whose lives would be greatly affected by their disappearance is ours.

Studies have suggested that forest elephants contribute to carbon sequestration. In simple terms, by preferring to eat smaller tree species over trees with high wood density, elephants thin out smaller trees which have less carbon storage capabilities, allowing the larger trees to grow. Worryingly, it appears that climate change is already destabilising the fine balance of these rainforest ecosystems. The fruiting trees, upon which elephants and a host of other species depend, require subtle decreases in temperature to come into flower. As a result of rising average temperatures, scientists observed an 81% decline in fruit yields between 1986 and 2018. This has hampered elephants’ abilities to put on important muscle and fat, and over a twenty-year study, researchers noted an 11% decline in their body condition.

We have shared a very long history with elephants. It is documented that civilisations in the Indus Valley domesticated Asian elephants (Elephas maximas) as early as 5,000 years ago. You may be familiar with the exploits of the great Carthaginian leader Hannibal, who used African elephants to cross the Alps and wage war with Rome. These elephants are believed to have been part of an extinct subspecies, imaginatively called the North African Elephant (their Latin name, as is often the case, is far more poetic: Loxodonta africana pharoensis). Yet, it is widely agreed that African elephants do not appreciate being handled by humans and are not used in circuses or zoos as they are too dangerous. But did you know that forest elephants have been tamed by humans? 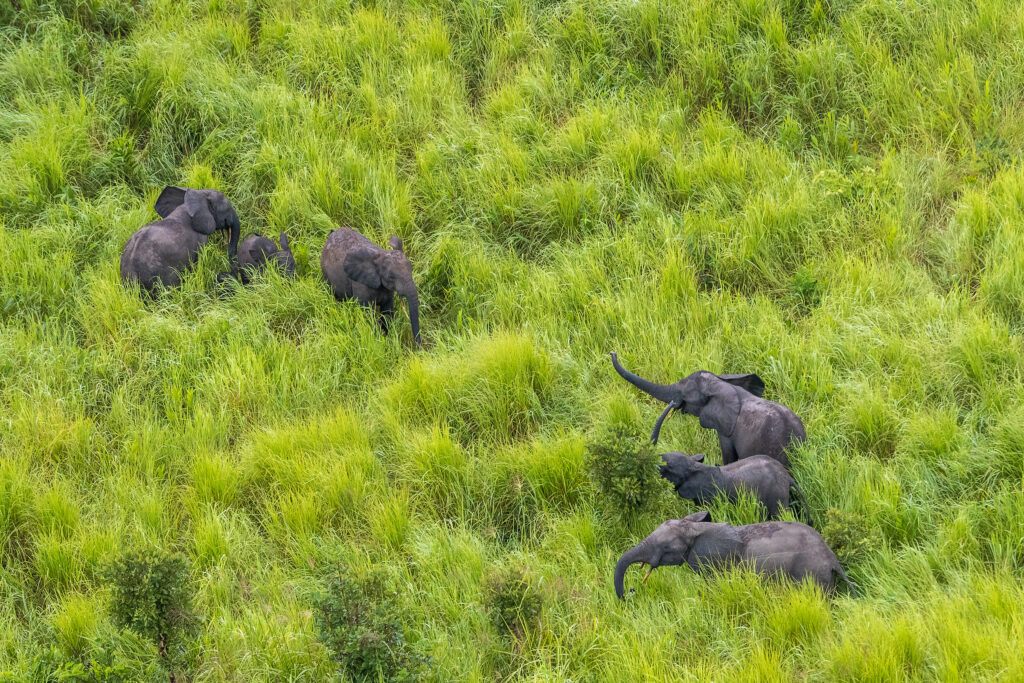 During the period of Belgian rule over what is today the DRC, King Leopold II personally funded a project to tame elephants, a feat not achieved on the continent for over two millennia. The elephants in question were forest elephants, and they were used due to the lack of trade routes and viable methods of transporting goods. Most draft animals succumbed very quickly to the sleeping sickness of the Tsetse fly, and elephants seemed an effective solution.

Capture began in 1901 in the village of Api, Northern DRC. In 51 years, around 600 elephants had been trained in several camps and sent off to work in various locations throughout the country. The advent of the tractor and the gradual destabilisation of Belgian rule brought an end to this interesting historical footnote, but a few elephants were still being trained until the 1980s. 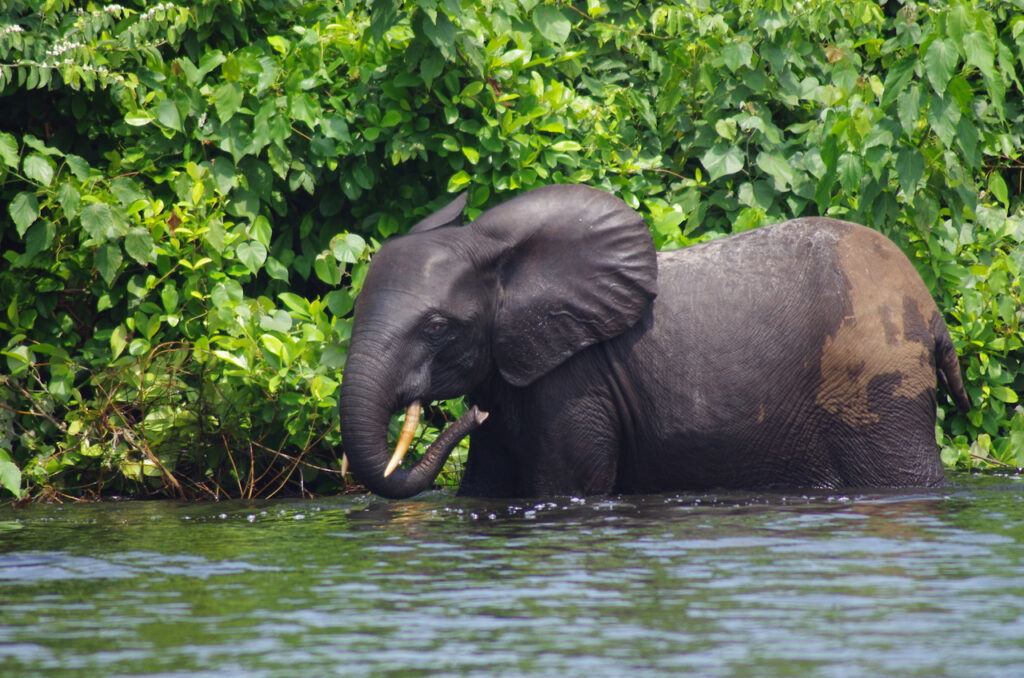 What does the future hold for Loxodonta cyclotis?

Forest elephants are one of the slowest reproducing mammals in the world, a recent paper calculated that it would take sixty years for the population to double if killing rates stayed the same. To put this into context, it is three times the average savannah elephant population growth rate. To save these elephants, “nations must cooperate by designing multinational protected areas, coordinating law enforcement, and prosecuting nationals who commit or encourage wildlife crimes in other countries.” 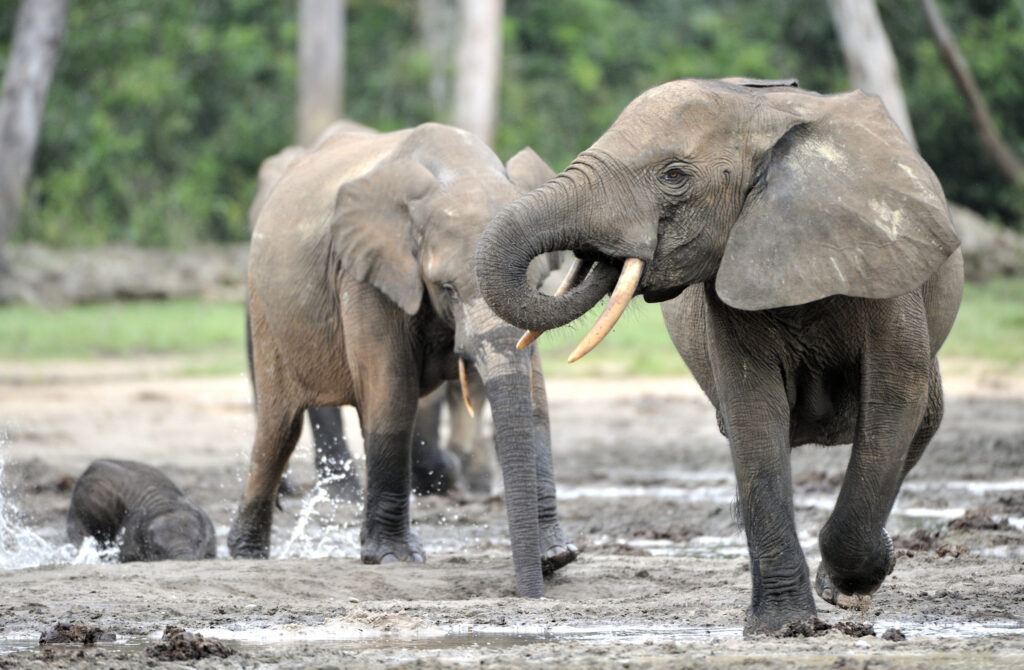 About the Elephant Crisis Fund

The Elephant Crisis Fund was created by Save the Elephants and the Wildlife Conservation Network in partnership with the Leonardo DiCaprio Foundation. It works with a coalition of individuals, scientists, conservation organizations, and governments to stop the killing of elephants, prevent ivory from reaching markets, reduce the profitability of the trade in ivory products, and to promote human-elephant coexistence. It has so far granted $25 million to partners since 2013.

This August 12 for World Elephant Day, we’re launching a campaign to save this important species and the habitats they call home. Join us on social media in our efforts to create a safer world for forest elephants. Learn more more at elephantcrisisfund.org/worldelephantday.