It’s easy to believe that we’ve discovered every species there is to see that walks the earth. But in 1992, a discovery was made in the Annamite Range of Vietnam and Laos that would turn out to be one of the greatest zoological surprises of the 20th century. While on a general wildlife and biodiversity survey of Vu Quang Nature Reserve, a team of biologists from the Vietnamese government and the World Wildlife Fund came across a pair of straight, parallel, and long horns in the home of a local hunter that were unlike anything they’d seen before.

After asking around, the team gleaned that while the locals had always known about this animal,  even  sighting it a rare few times, they had almost never seen one without the help of hunting dogs tracking them down. However, unlike the pangolin or the golden turtle—species who are prized for their medicinal value, this animal held little interest, financial or otherwise, to them because so little was known about them. And outside of its immediate range, this ungulate was completely unknown.

The researchers continued to find more than twenty horn specimens and even three complete sets of skins with a distinct pattern and form that was different from any other ungulate in the area. All of that in addition to DNA sequencing concluded that what they were seeing before them was an entirely new and distinctive large animal species, a first in 50 years, which would come to be known as the saola. It would take another four years for any scientist to actually see one in the flesh.

Though resembling an antelope with its pair of sharp, long horns, saolas are actually closely related to cattle. The saola, meaning “spindle-horns” in Vietnamese and pronounced “sow-la,” would be captured more than a dozen times over the next few years. Unfortunately, with so little known about these beautiful creatures, the captured saolas perished in captivity. Their caregivers had little to no knowledge on how to help these captive saolas survive—this ranged from what they needed to eat to what environment would be optimum for their survival. Therefore, very little was learnt from these experiences that proved traumatic to the saola as well as their caretakers. 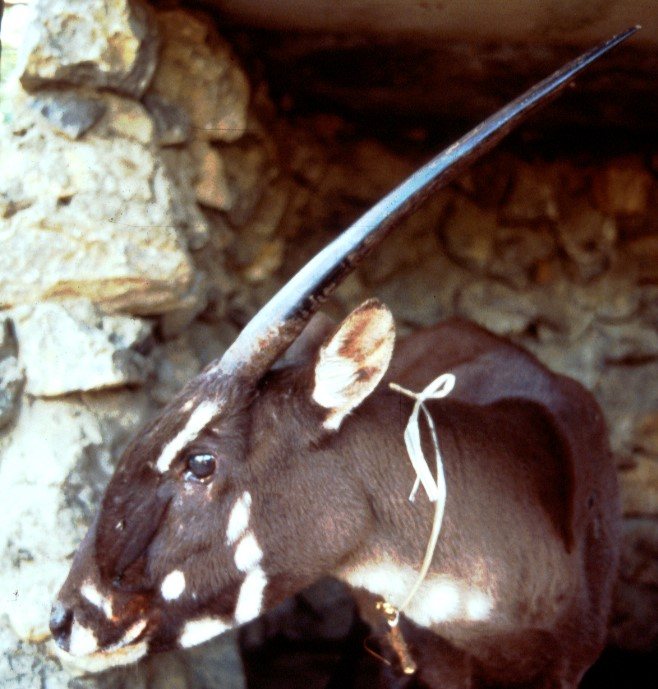 Saolas have never been observed in the wild by scientists and they would only be photographed in the wild five times since their discovery. This has earned this ungulate the reputation of being almost supernaturally hard to find, and the nickname, “The Asian Unicorn.”

Like most wildlife studied with camera trap technology, the saola makes its home in a harsh environment of rugged and densely forested terrain, in wet evergreen or deciduous forests, near rivers and valleys. Some wildlife travel along trails but saolas move through the densest parts of  the forest along unpredictable routes, making it nearly impossible to know where to look for them or even where to place a camera trap (camera traps can only capture what is directly in front of it).

A precise estimate of the saola population is hard to deduce with the data researchers have now. It could be high as three hundred spread out into multiple subpopulations, or even as low as tens of individuals. With everything currently known about saola, it’s too hard to tell. Local inhabitants report seeing similar ungulates often but recorded sightings of saola by villagers are in the tens. The very fact that it’s so rare to capture a photo on a camera trap gives credence to the rarity of the species. The populations may be at a tipping point where it may be so low that their subpopulations can be affected by other threats. Lack of genetic diversity can lead to genetic inbreeding, skewed sex ratios, and isolated males and females may not be able to find each other for mating. According to the results of a 2015 population study, even if immediate cessation of all hunting threats could be achieved, it’s likely that all saola subpopulations would drift to extinction within 10-15 years. Currently there are no saola in captivity, making it possibly the world’s most endangered animal. 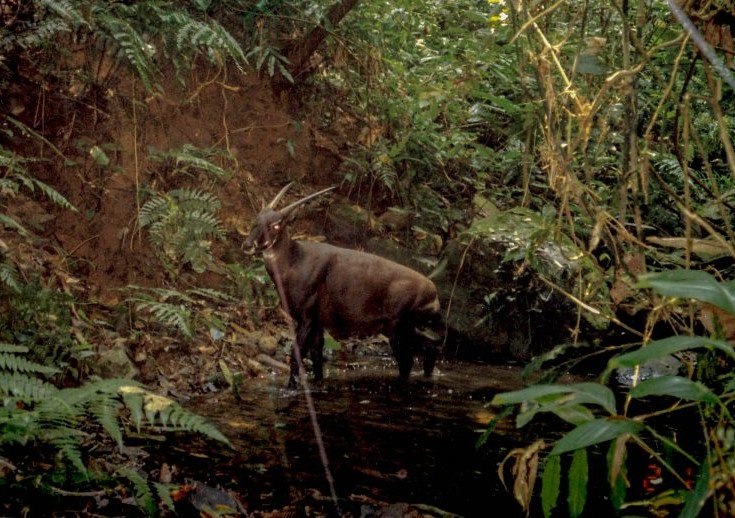 Wild saola captured on a camera trap in central Laos in 1999, one of the few pictures of a saola in the wild. Photo-William Robichaud

However, there is still hope for the saola. They’ve been able to stay off the radar of poachers  for centuries thanks to their elusiveness. They have little cash value in the region’s wildlife trade unlike many other species in the area. Chinese and other Asian cultures never knew about saola and so they are not listed as a traditional form of medicine. They’re not an important source of protein for the locals and they are not considered a threat to their crops, which is what often leads to human-wildlife conflict. Many locals actually take pride in the fact that saola are found nowhere else in the world and that makes it easier to get the support of the community.

Despite their neutral reputation and elusiveness, incidental threats still exist that threaten the saola’s existence. Thousands of wire cable snares are set in the Annamite Range to capture wildlife desired by professional poachers like wild boar, sambar, or muntjac deer and the saola can sometimes, unfortunately, be  found caught in these traps and dying of thirst. Conservationists from the Saola Working Group (SWG) have removed more than 130,000 snares to protect the saola and other wildlife in the area.

The Saola Working Group was formed in 2006 by 19 individuals dedicated to saving the saola from extinction. The team is made up of experts from a range of distinguished conservation organizations around the world and the Department of Forest Resources Management (Lao PDR) working in the saola’s range. Their goal is to conserve the Critically Endangered saola by identifying their exact locations and by removing snares in those territories in which they live, so that they don’t inadvertently get trapped and found by bush meat poachers. They are also seeking to establish a captive breeding population of saola first in Vietnam and subsequently in Lao PDR, which can later be reintroduced into secured key areas of saola habitat in the future.

The facility would have better care than the primitive pens that were cobbled together for captive saola in the past. It would be run by experts and veterinarians from around the world and if successful, would be a “safety net” of a population if all else failed.

Their encompassing goal is to leverage saola as a flagship species for conservation in the area and the landscape itself. National parks in Pu Mat, nearby Vu Quang, and other nature reserves were set up by the Vietnamese government in response to the discovery of the saola and all hunting was banned in their critical habitat. The country of Laos, where the saolas have also been spotted have initiated similar actions. The Saola Working Group believes wholeheartedly that no good deed will go to waste and that by saving saola they can also protect the overall biodiversity of the Annamite Range.