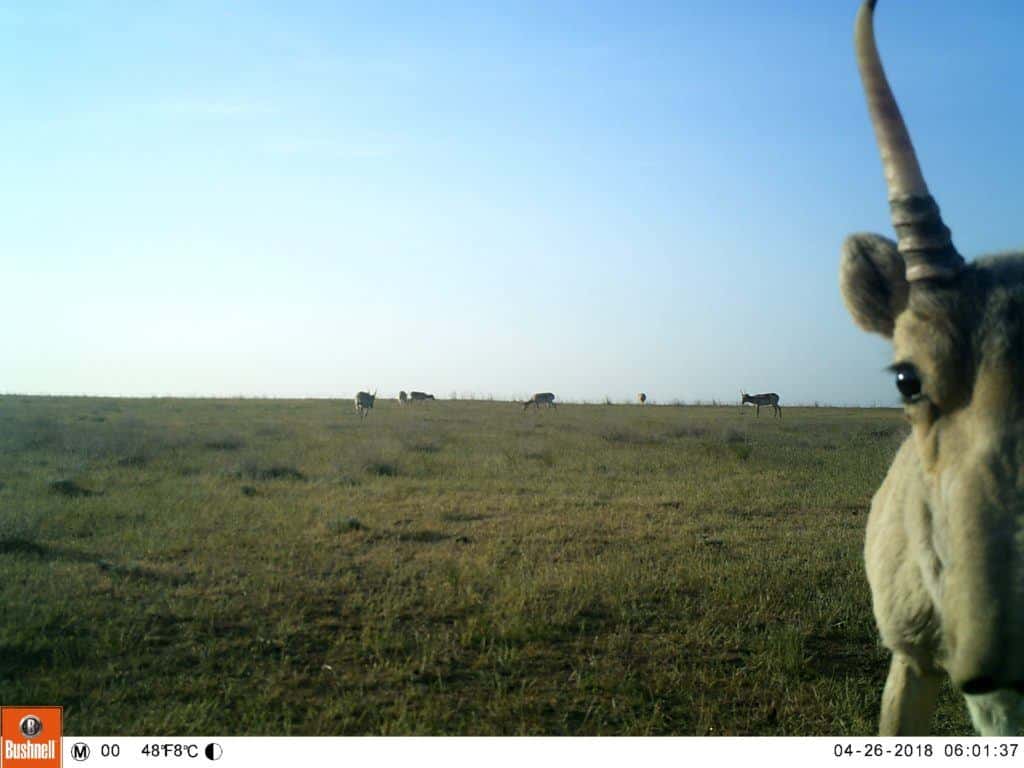 As we bumped along the rutted dirt roads of Stepnoi Reserve in the back of the Land Rover, I found myself wondering how the rangers in the front seat—the husband and wife team of Vladimir and Galina Kalmykov—could possibly know where they were going. Looking out the window at the vast and stark landscape of the Russian steppe, it seemed to stretch forever, and with no trees or obvious changes in the topography, I—who previously considered myself to have a pretty decent sense of direction—had no idea where we were. Each time we got to a fork in the road, Vladimir took it confidently—though to my untrained eye, there were no discernable landmarks to indicate where we should go next. So, we put our trust in the rangers as we kept our eyes peeled out the window in hopes of seeing some saiga—a critically endangered antelope species that has been hunted nearly to extinction for their horns and their meat.

Herds of saiga once numbered in the millions, but today only about 160,000 survive across Russia, Uzbekistan, Kazakhstan, and Mongolia; their population has crashed by 95% in fifteen years, the fastest decline ever recorded for a mammal species. The fall of the Soviet Union in 1991 drastically impacted the saiga; the resulting collapse of rural economies led to widespread unemployment and poverty, and saiga poaching provided a source of food and income. The species’ struggle was further compounded over the last few years when disease outbreaks caused massive die-offs, leaving over 200,000 dead.

But people like Vladimir and Galina are working to protect the animals that are left. Vladimir began working as a ranger 30 years ago, it was a role he fell into and ended up loving. He now is the director of the Stepnoi State Nature Reserve in the Astrakhan region of Russia. He and his team—including his wife, Galina, who is the educational officer for the reserve—run an effective anti-poaching program. The Russian population of saiga, about 7,000 animals, is shared between their reserve and the neighboring one, Chernye Zemli (“Black Lands”) Nature Reserve. Because of their hard and careful anti-poaching work, they haven’t seen any incidents of poaching inside Stepnoi Reserve in over four years. Outside of the reserves though, it’s a different story; saiga are illegally poached for their horns and meat on a regular basis. Though they find safety and peace in Stepnoi Reserve, the rangers sometimes worry that the protection they provide is a double-edged sword. The saiga become used to the presence of people while in Stepnoi and don’t see them as a threat. But as soon as they leave the boundaries of the reserves, which they must do as they migrate, their chances of being poached increase exponentially. Vladimir muses that it was easier to be a ranger in some respects before the fall of the Soviet Union; they had the authority to arrest poachers on the spot, which is not the case now.

But the Stepnoi rangers will keep doing their jobs because without them, the saiga would have no chance. The reserve was established in 2000 and most of the rangers have been working here for over ten years. Until last year though, the reserve didn’t have an established base—they lived and worked out of their vehicles, in temperatures ranging from -40F in the winter to over 100F in the summer. Thanks to recent support provided through the Saiga Conservation Alliance, however, they now have a bunk house, kitchen, dining area, and even a sauna to help them through the long Russian winters. These rangers are committed to their work—it’s not just a job to them, but a calling. They can’t imagine their lives without Stepnoi—not only are they deeply committed to protecting saiga and other wildlife in the reserve, but they relish the time they spend there. They recognize the immense benefit that spending time in nature has had on their lives.

Vladimir and the team he leads at Stepnoi set the bar for an effective anti-poaching program. At the same time, Vladimir recognizes that he can’t do this job forever. He will continue to perform his duties as well as he can for as long as he can while simultaneously working to raise the next generation of rangers who can take over when he retires and carry the torch of saiga conservation into the future.