It’s no secret that at 100 feet long, blue whales are the largest living animal on Earth. A blue whale can be the size of a passenger plane, or the size of three school buses, and a tongue that weighs as much as an elephant. Despite all we know about their incredible size, these undersea giants still have secrets to hide. That’s why Dr. Asha de Vos has dedicated her life to studying the mysteries of the blue whale. 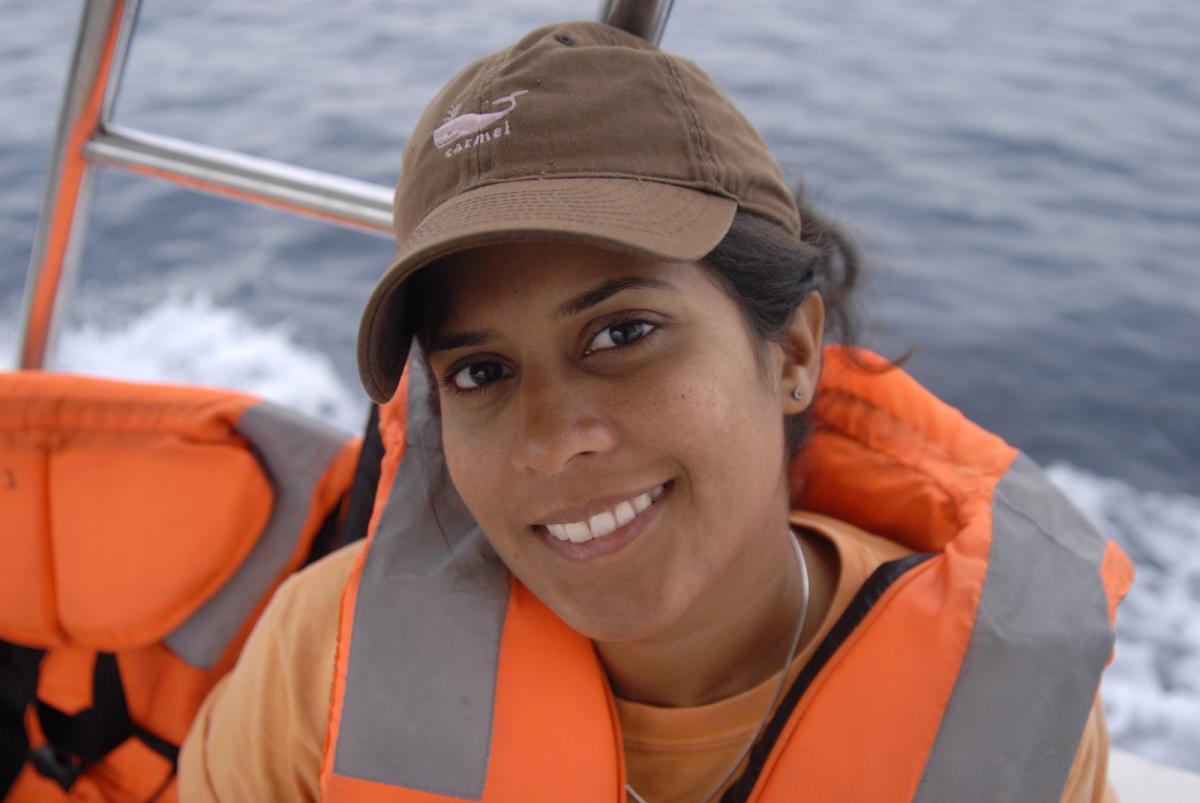 Asha’s experience with blue whales started in 2003, when she was on a research vessel tracking sperm whales near her island home Sri Lanka. The ship was using underwater microphones (called hydrophones) to locate their targets while Asha was on deck standing lookout on a clear, calm day. Suddenly, a tall spout broke the surface of the ocean, reaching high up, up into the sky. The enormous spout could only come from one animal: a blue whale.

That one blue whale turned out to be six and as Asha and the ship followed them, they found something that would change the course of her whole career. They came across bright red neon nuggets of whale poop. 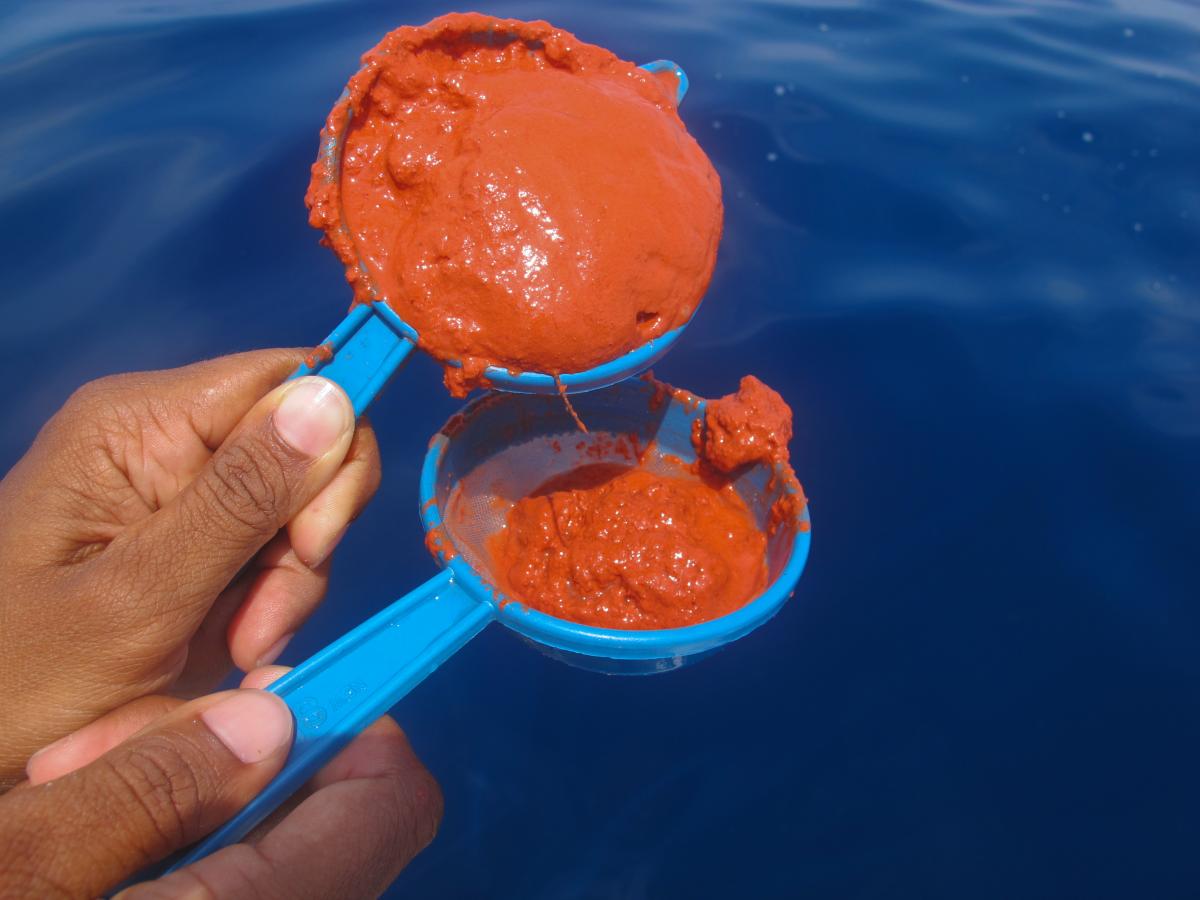 It’s easy to laugh at this discovery, but the poop revealed a clue about the nature of these blue whales. Blue whales typically feed in colder waters and migrate to warm waters to breed and calve. It doesn’t get much warmer than Sri Lanka, a tropical country five degrees above the equator. The poop was a sign that these whales were actually feeding in warm waters.

This breakthrough launched a path for Asha’s pioneering work with the “unorthodox whales” of Sri Lanka. They were behaving in a way that no other blue whales do, because as it turns out, they are the only population of blue whales in the world that do not migrate to colder waters to feed. The uniquely enclosed ocean basin of the northern Indian Ocean and monsoonal currents can remarkably drive productivity so they have no need to migrate.

Threats to Blue Whales
Whales in the northern Indian Ocean have never faced the threats of whaling except for a period in the 1960s when Soviets illegally hunted about 1,300 blue whales. Today, the threat of whaling is all but obsolete, leaving ship strikes as the biggest threat to blue whales here.

The south coast of Sri Lanka is home to one of the busiest shipping lanes in the entire world. Everything that travels between Singapore and Dubai, two of the biggest ports in the world, go through this area. Ship traffic has actually quadrupled in this part of the ocean since the 1970s (while doubling everywhere else).

The blue whales in these waters are caught in the crossfire, their ranges overlapping with the modern shipping lanes. Even with their massive size, the whales can’t compete with the force of a speeding container ship, their limp bodies coming into port wrapped around the bow or floating in the ocean with enormous gashes. 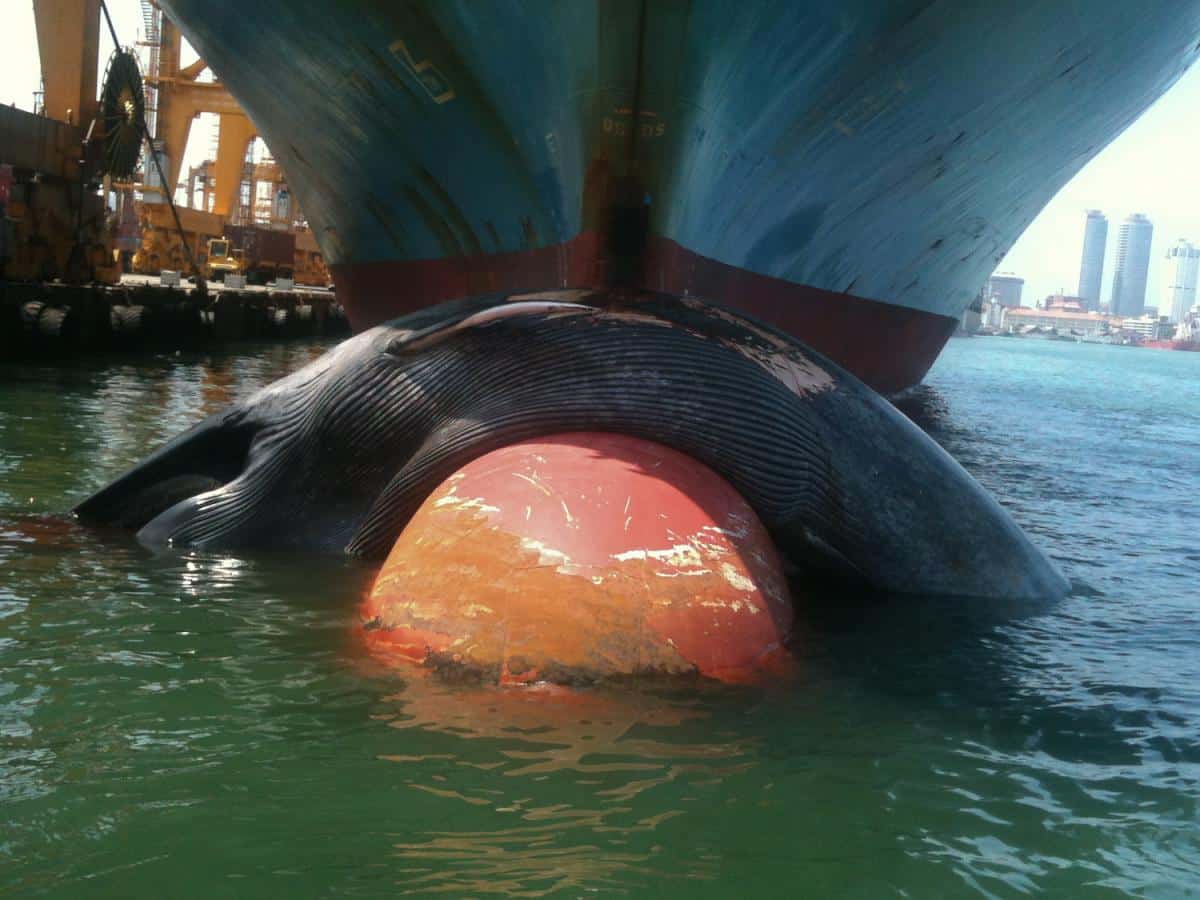 Something must be done to separate the ships from the whales. Science shows that ninety percent of ships aren’t coming into Sri Lankan ports. By shifting shipping lanes 15 nautical miles off shore, it would be possible to avoid the places where whales depend on for their survival. The remaining ten percent of ships that do travel nearshore so they can enter the local ports would do much less lethal damage if they were to slow down in the areas where whales are found.

Blue Whales’ Vital Role
Blue whales are iconic and beloved, but they also have a vital role as ecosystem engineers. These 300,000 pound animals dive deep into the ocean, consuming iron and nitrogen that can’t be found in surface water. As they come up to the surface to breathe, they release enormous fecal plumes full of nutrients—the ocean’s fertilizer. The phytoplankton (tiny forms of plant life) that live in these surface waters use these nutrients along with other important ingredients like sunshine to photosynthesise and release oxygen into the environment which is important for the survival of the whole planet.

Creating Opportunity for Marine Conservation
Sri Lanka is rich in biodiversity but less than 1% of its oceans have been protected. The country has been listed as one of the forty worst funded countries for conservation and struggles to meet the challenges faced by the marine ecosystem due to a lack of manpower.

Part of the problem is that marine biologists in Sri Lanka marine biology is an unorthodox and unencouraged career path, and partly because there is a distinct lack of opportunity for anyone interested in venturing into the field. Which is why Asha considers herself lucky to have had the support to pursue her dreams and also why she established Oceanswell. Oceanswell is the first marine conservation research and education organization in Sri Lanka; the organization hopes to answer the growing need for marine conservation in the region using homegrown talent to address local issues and create conservation solutions.

Seventy percent of the planet is ocean yet there’s a disproportionate amount of conservationists working to save it. Asha believes that if we really want to make a difference, we need custodians on every coastline who can empower, engage, and enable their own people to care about and protect the oceans.

We believe in Oceanswell’s mission to create the next generation of marine conservationists who will show everyone the magic of the world’s oceans.