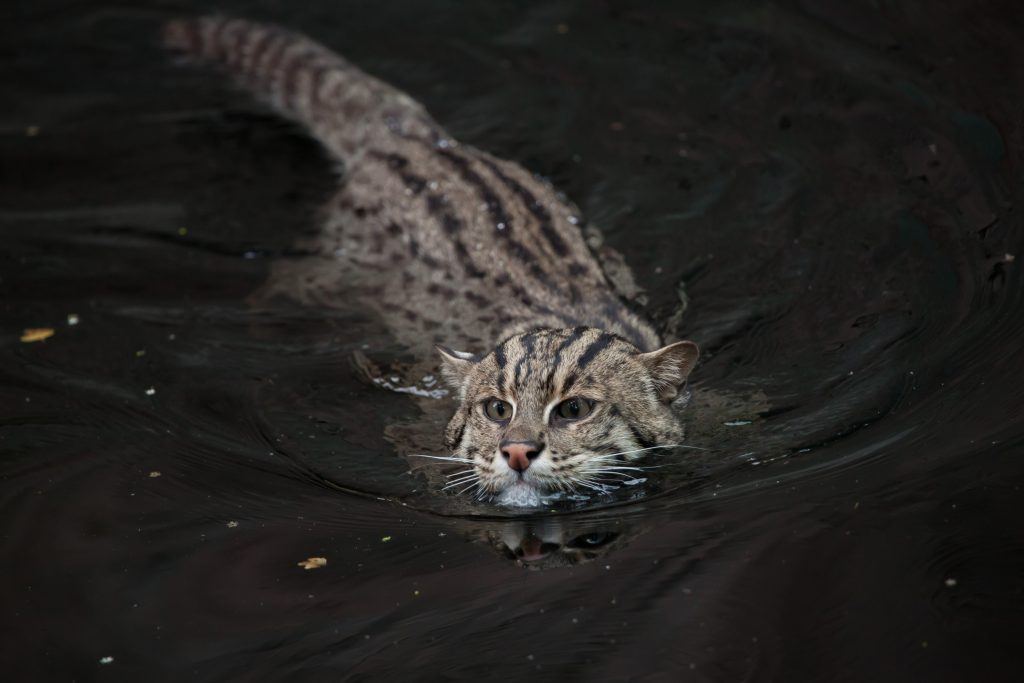 Louis Wain’s (1860 – 1939) depictions of domestic cats decorate the walls of art museums, private collections, and hundreds of children’s books, magazines, and journals. Wain did not just illustrate cats; cats were the essence of his artistic career. But something Wain was quoted as saying stuck in my mind more than two decades ago:

“I have found as a result of many years of inquiry and study, that people who keep cats and are in the habit of petting them, do not suffer from those petty ailments which all flesh is heir to. Rheumatism and nervous complaints are uncommon with them, and cat’s lovers are of the sweetest temperament. I have often felt the benefits after a long spell of mental effort, of having my cats sitting around my shoulders or half an hour’s chat with Peter [his black and white cat].” 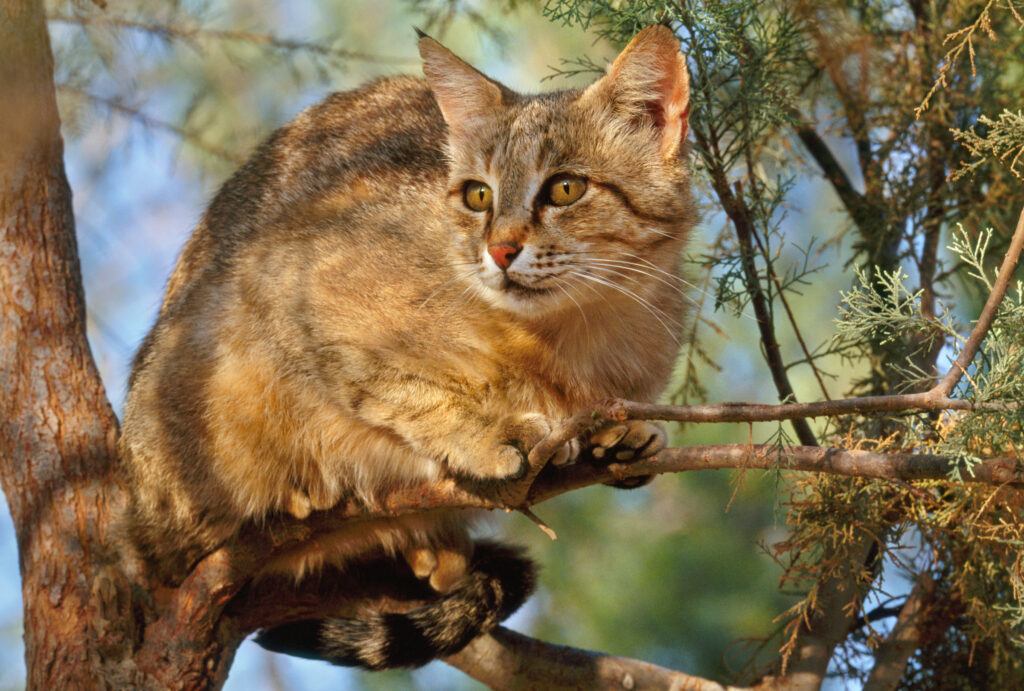 A European wildcat in a tree.

During September 2011, I was deep in the forests of southern Guyana visiting an Indigenous community. As is typical, the community had various village pets that came and went as they pleased: macaws, squirrel monkeys, and a capybara, the world’s largest rodent. While sitting on a log eating, the village capybara nudged my elbow in a not-so-subtle attempt for my vegetables. I let go of my fork and began scratching her neck and shoulder. Immediately the capybara began purring loudly. I could feel the deep vibrations in my hand right up my arm. She leaned into my hand stretching her neck. In a moment I felt what must have been the same strange deep relaxation. Then and there, deep in the rainforest among the thatched huts and sounds of nature, life was good, really good. What state comes after deep relaxation? That’s where I was. For all intents and purposes, I was on another planet. 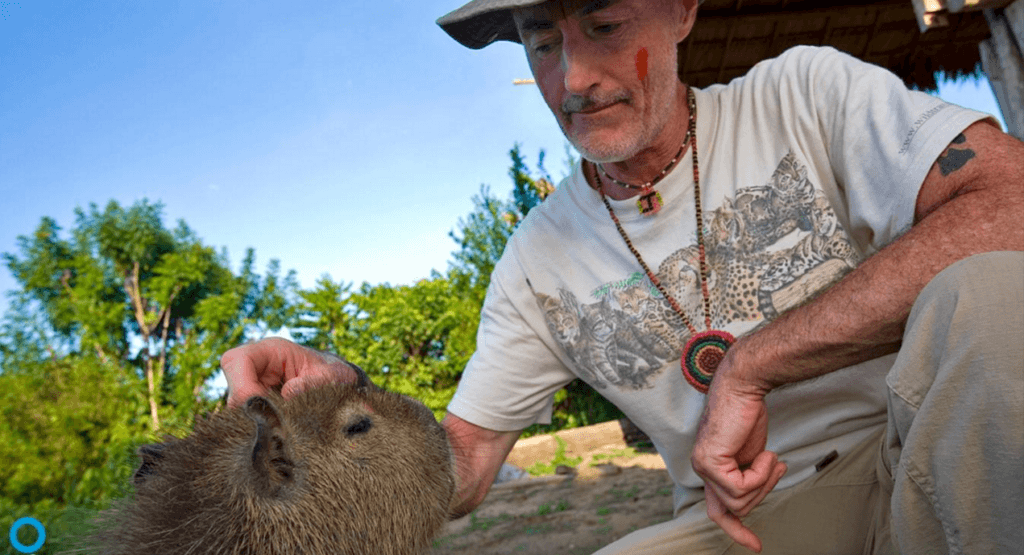 Like cats, capybaras also purr when in a good mood.

Three years ago, my colleague broke his collar bone in a soccer match. Following his visit to the hospital he was told to go home and rest. After his recovery his son related to me a curious story. Their house cat never ventured upstairs until my colleague returned from the hospital. Each time my colleague rested or slept upstairs, the cat curled into a fur-ball on his collar bone and purred like a freight train locomotive. When the collar bone healed, the cat declined all invitations upstairs.

Two years ago, while visiting Botswana, the shoe dropped again. A friend told me his wife was making a fast recovery from breast cancer. Although she endured chemotherapy, her hair did not fall out, and her recovery exceeded even her doctor’s expectations.

“To what do you attribute her remarkable recovery?” I asked.

His wife’s faithful companion slept on her chest or back as long as she was prone. 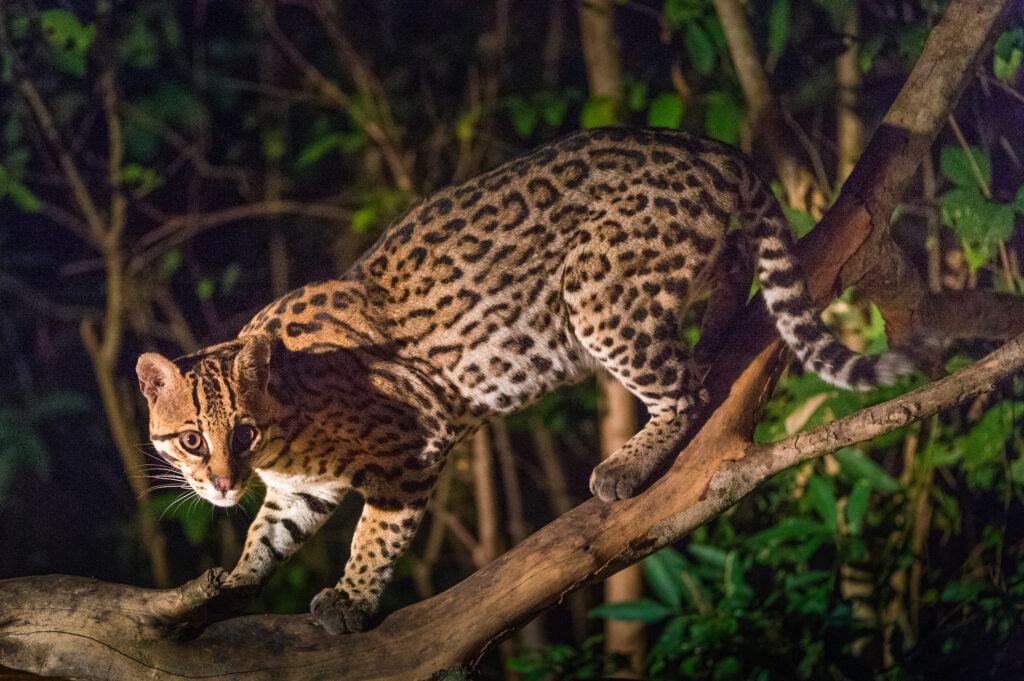 An ocelot at night.

In October 2021, my Brazilian colleague discovered she had uterine cancer. She underwent two surgeries. She described her rapid recovery: “My two cats climbed onto my belly after I got home from hospital and purred for days. When I recovered, they never did that again.”

The ability to purr evolved many millions of years ago, perhaps hundreds of millions of years ago. Because many species of cats, capybara, and most likely other animals purr, the purr must have evolved before herbivores like the capybara and carnivores like modern cats went their separate paths on the evolutionary tree. The modern conical-toothed cats existing today are the product of 37 million years of evolution, relatively recent on the carnivore tree.

In 2010, I wrote in my book “Small Wild Cats: The Animal Answer Guide” that, since the purr is a product of evolution, and had not become superfluous, purring must be beneficial. What could this benefit be? Energy is expended during respiration. The cost of breathing is increased by adding a purr so possible benefits must outweigh additional costs. Perhaps the purr carries a positive health benefit. But that’s as far as I could go.

Elizabeth von Muggenthaler, a specialist in the field of bioacoustics at the Fauna Communications Research Institute in North Carolina measured and quantified the cat’s purr. The average domestic cat purrs at a frequency of 25 to 150 Hertz (Hz). Humans have a range of about 20 to 20,000 Hz, so most of us can hear the purr. We can also feel the vibrations. But the cat’s purr is multi-frequency. More recent research has shown that frequencies between 20 and 50 Hz increase bone density. Experiments have demonstrated that the same frequency range relaxes stubbornly tense muscles. 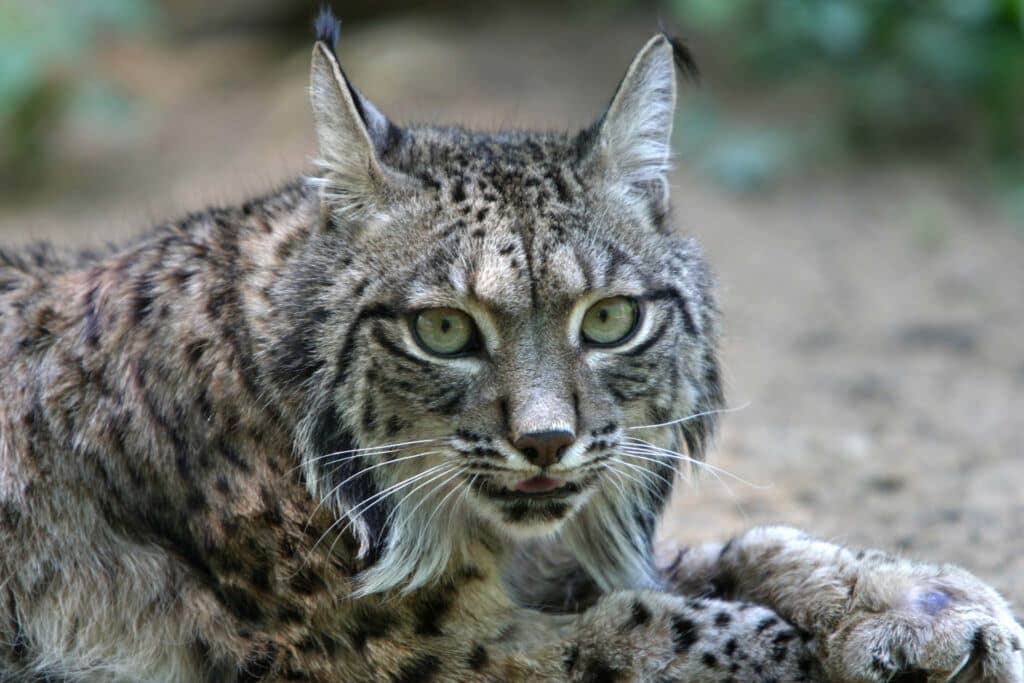 Pulsed electromagnetic field (PEMF) devices with frequencies within the range of the cat’s purr have been shown to non-invasively treat a variety of biological maladies. Growing clinical evidence supports the use of these low frequencies in animals and humans for specific conditions such as bone healing, osteoarthritis, inflammation, wound healing and post-operative pain. A newly developed device was tested on an aged dog that had lost the ability to walk, could not be treated using conventional veterinary medicine, and was scheduled to be euthanized. The dog was treated with a device that simulated a cat’s purr for twenty minutes a day for three consecutive days. On the fourth day the dog regained its ability to walk on its own and returned to its joyful human companion. The same device and treatment schedule was used on a horse to relax tense and constricted neck muscles.

There is little doubt that such devices bestow similar benefits to humans. After all, bones evolved some 510 million years ago and all vertebrates from tiny frogs to humans have bones that consist primarily of calcium phosphate. Unfortunately, clinical trials on humans are both expensive and time-consuming. Yet if a similar device slows or even reverses the onset of osteoporosis, a condition of weakened and brittle bones affecting more than three million people in the U.S.A. alone, then a faster track to more widespread application and use could occur. Might such a device and treatments be expensive? I didn’t ask Medicare to reimburse my cat adoptions. 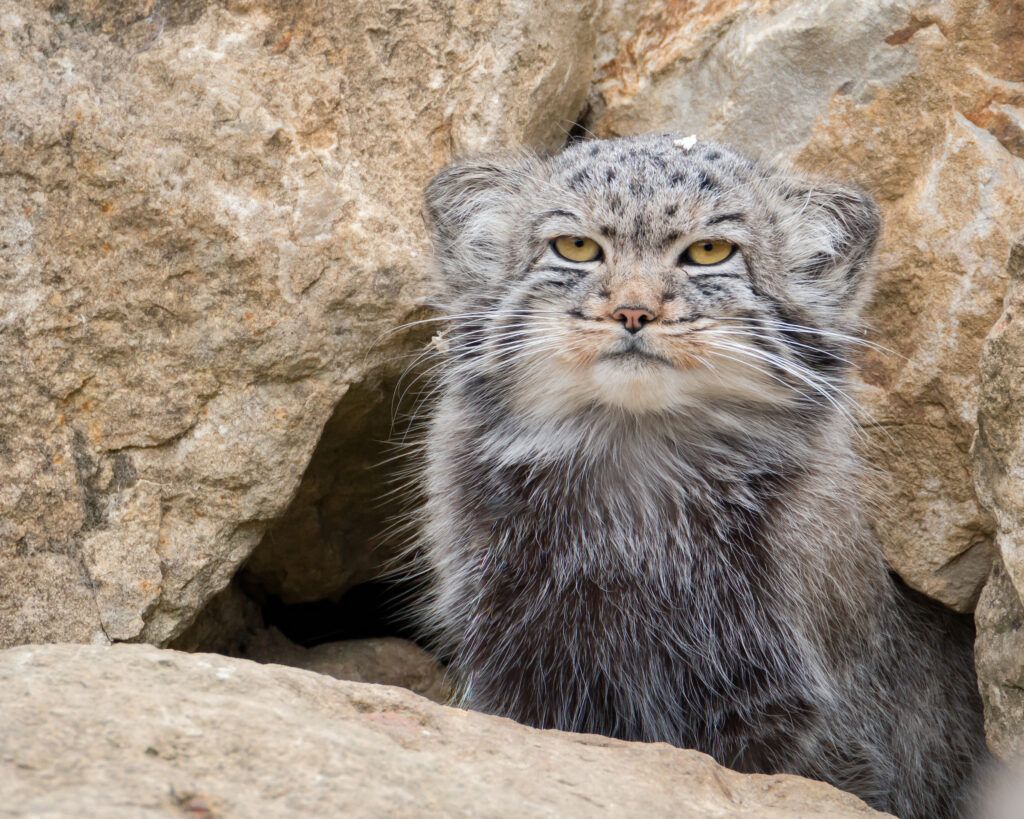 A Pallas cat, also known as a manul.

Hidden in what seems to the ear as a single sound or frequency is actually multiple frequencies representing multiple sounds, a veritable symphony of sound with a single overall purpose: to promote a healthier life.

I suspect Wain’s hunch was most likely correct. The ability to purr might well explain the age-old legend that our furry friends have nine lives. In addition to simply enriching our lives by their behavior and presence, cats contribute to our own health and well-being far more than we ever imagined. Being multi-frequency, the cat’s purr accelerates the healing of bones, reduces pain, and relaxes muscles. I’ve accepted this for a long-time because I can’t relax, think, and write about wild cats without being surrounded by my own little long-time companions. Excuse me while we head-butt.