Okapi Conservation Project (OCP) has worked amidst political strife and uncertainty in the Democratic Republic of Congo for over 30 years. In its recently released 2017 Annual Report, Executive Director John Lukas reflects back to the beginning of OCP and pays homage to the many who have lost their lives on the front lines of conservation. Read his full letter below:

Twenty-seventeen was a landmark year for the Okapi Conservation Project. For over 30 years starting with the initial investment of Howard Gilman and sustained with support from caring individuals, zoos and foundations, OCP staff and ICCN rangers have been working tirelessly to secure a future for okapi in the rainforests of the Congo.

As I look back on that first trip to Zaire in June of 1987 when I was accompanied by a global team of experts, Karl and Rosie Ruf from Switzerland, Jean N’lamba from Zaire, Steve Shurter and Karen Meeks from Miami and several ICCN officials, we all boarded a rickety cargo plane in Kinshasa to fly to Goma across a country as large as Europe with no road access from one side of the country to the other.

In Goma, on the shore of Lake Kivu surrounded by volcanoes, we loaded up four trucks with supplies and started our 600 km journey along the ‘road of beauty’ following a spine of hills flanking the western side of the Rwenzori mountains separating Zaire from Rwanda and Uganda. We stayed in comfortable ‘auberges’ along the way, and everyone we met was friendly and smiling. Today, this is one of the most dangerous roads in the world with truckers going around through neighboring countries rather than risk their lives driving through Kivu Province. Five days later, we arrived in Epulu and started right in rehabilitating the Epulu Station, originally built by the Belgians in the 1940s and abandoned in 1961 when Zaire became an independent country.

When we started this project, there was no area set aside to conserve okapi – the national animal of Zaire and protected by law since 1933. Working together with the Wildlife Conservation Society and the World Wildlife Fund, a proposal was drafted to form a protected area for okapi which was accepted by the government of Zaire, and in 1992 the Okapi Wildlife Reserve was created. No people were moved out to set up the Reserve, making managing human activities an important part of protecting okapi habitat. The Reserve not only protects the home of okapi, chimpanzees and forest elephants, but also that of the M’buti Pygmies. Okapi and M’buti both require an intact forest ecosystem to survive and thrive – protecting okapi also helps preserve a unique human culture that has, for 40,000 years, been depending on forest resources to maintain their hunter-gatherer, nomadic lifestyle. 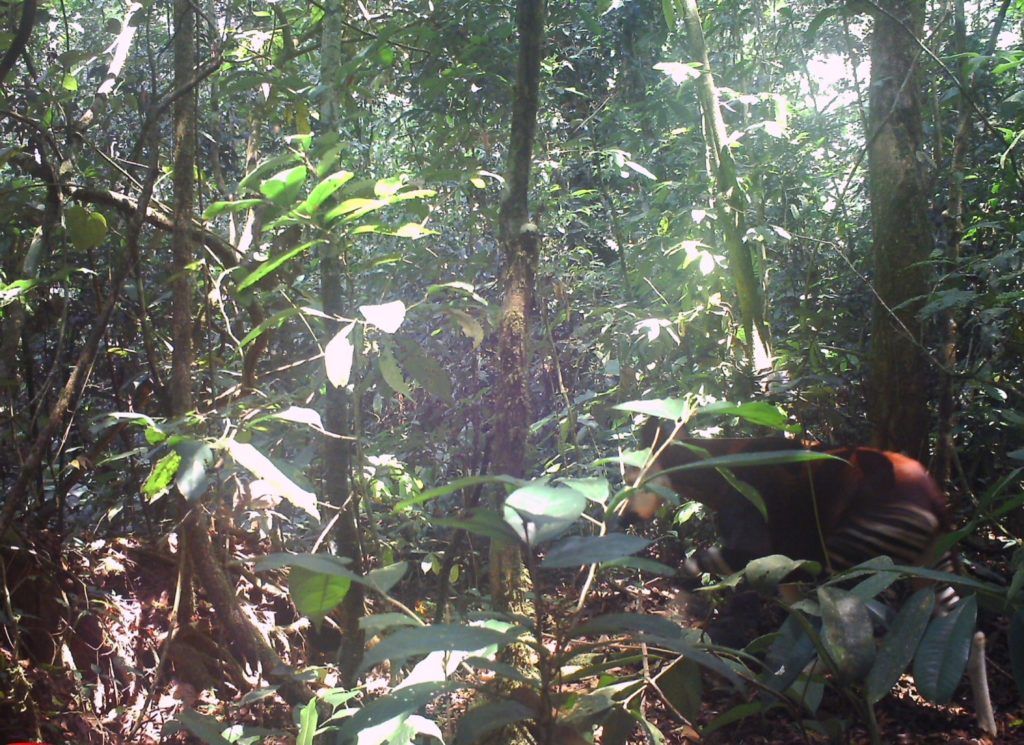 An okapi walks through the dense forest of the Okapi Wildlife Reserve.

The Okapi Wildlife Reserve is 13,700 square kilometers (about the size of New Jersey) of lowland tropical rainforests laced with streams and raging rivers and home to approximately 4,000 okapi. When the six-year-long Civil War broke out in 1997, the country, which was Zaire, become the Democratic Republic of Congo and began its slow slide from peace and hope to war and despair. Protecting okapi and forests became much harder. Immigrants fleeing the war-torn east looking for land on which to grow food, corruption fueled poaching of elephants and illegal mining overwhelmed the government’s ability to defend protected areas. That’s when we turned to you, our supporters, and you responded by helping us increase our support to the brave rangers to expand patrol efforts, to control access to the Reserve, deter bushmeat hunting and close illegal mines.

Our second and equal goal is to help communities in and around the Reserve cope with an uncertain future, help them grow more food, support the education of their children, supply their health clinics with medicines and provide clean drinking water sources. It has not been easy, as DRC is a dangerous place, but it is such an important home to so many people and animals that depend on the forests for their survival. The rainforests where okapi live are the most bountiful in Africa, and what we are trying to do is find a balance between the needs of people and the needs of animals. This will take time, money and much effort, and we depend on your support to try and make this happen.

I admit we are just holding the line until this resource rich country believes and invests in its people and values its diversity. Holding that line is a challenge that we have accepted. Knowing the people of Congo as I do, I believe they will come to honor and protect the forests where okapi live for the benefit of their children’s children. And knowing our supporters as I do, I know you will help us meet this challenge to hold that line for as long as it takes to secure a future for okapi in the wild. If we can convince the people of DRC to value okapi, there is a good chance of conserving the natural beauty and biodiversity of this vast and bountiful country.

As I reflect on the many days I have spent over the last 30 years in the rainforests of the Congo basin, I remember so many people who stood by my side on this journey to help protect and conserve okapi and to share its mystery with the world. All gave so much of themselves to help, but some gave their lives. In recognition of this year that marks our 30th anniversary, I praise their contributions to conservation and honor the sacrifice made by their families. Those who gave their lives serving conservation: