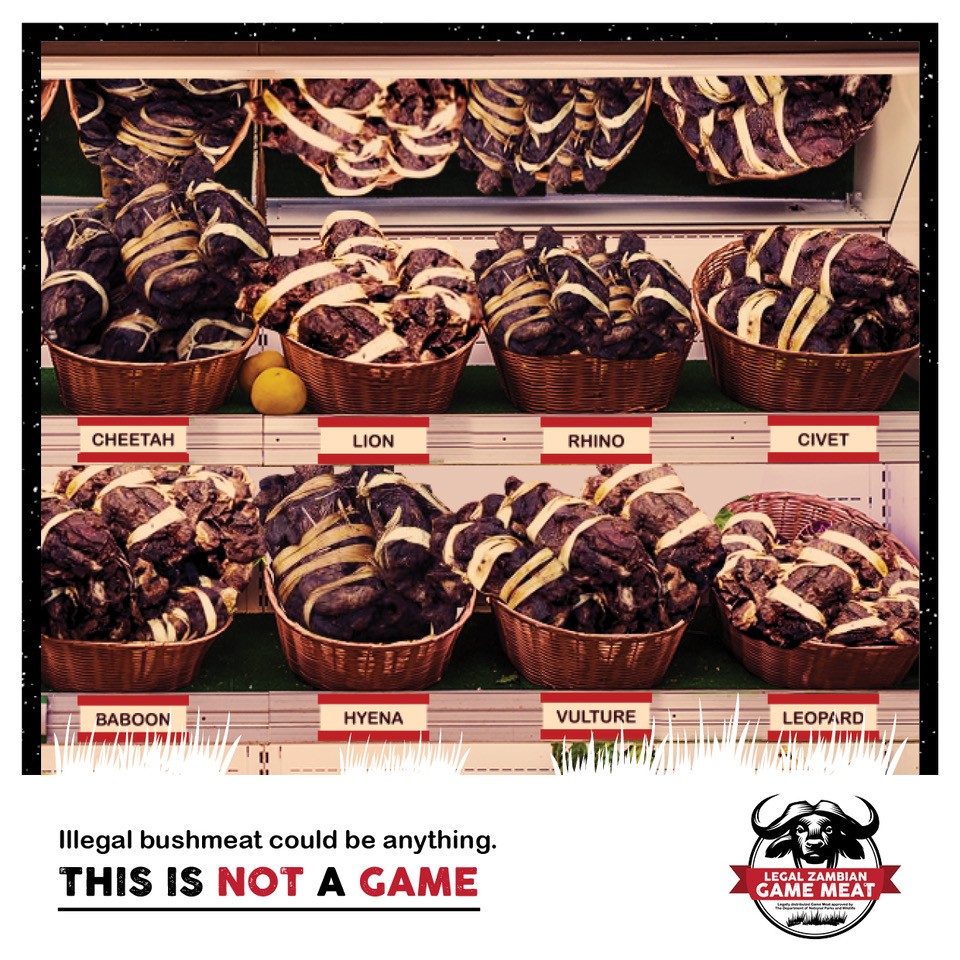 Illegal bushmeat trade—the illegal, commercial and unsustainable trade in wildlife meat—is probably the single greatest threat to wildlife (including lions) in Zambia and surrounding countries in the Southern African region. To tackle this problem head-on, the Wildlife Crime Prevention Project—a grantee of the Lion Recovery Fund—has launched a hard-hitting public awareness campaign, This Is Not a Game, with one critical goal: to end illegal bushmeat trade.

As populations rise and become more urbanized, the bushmeat trade is becoming increasingly unsustainable, causing profound wildlife population decline and eco-system collapse. Most poachers involved in the illegal bushmeat trade are often driven by need for some sort of income.

Using homemade, muzzle loading shotguns or snares, they head into protected areas and national parks all over Zambia and hunt indiscriminately. Once they’ve finished killing an animal, they carry it back to their village or camp and prepare the meat—this includes skinning and cutting the meat using rusty, old knives and then smoking and drying the cuts in the most unsanitary of conditions. Often different cuts from different species are mixed together indiscriminately (confiscated piles have been reported as including lion, pangolin, hyena). The meat is then stockpiled and sold to traders in bulk. Sometimes the meat is harvested from animals that died of disease or that were rotting in a snare. Aside from the risk poachers face when hunting, of encountering wildlife or being arrested, there is also an added risk that the meat they sell is highly contaminated and unsafe for consumption, leading to diseases or death.

Illegal possession of wild meat carries a sentence of up to 7 years in prison under the Zambia Wildlife Act No. 14 of 2015. Economically, this illegal trade threatens national parks and undermines the potential growth of the tourism and legal game farming industry. In neighboring countries such as South Africa and Namibia, legal game farming provides jobs, income and opportunities for the re-generation of wildlife populations to restock national parks.

In addition to severe ecological impacts, illegal hunting can confer serious negative economic and social impacts. Economic consequences include major negative impacts on wildlife industries (e.g. tourism, legal hunting and game farming). Social consequences include negative impacts on food security in the long term through the loss of a potentially sustainable supply of meat protein through legal hunting, the loss of tourism-based employment and the loss of wildlife heritage. The scale and the severity of the threat is such that without urgent intervention, one of Zambia’s most valuable resources will be lost.

So, what can you do to be part of the movement?

This Is Not A Game is a social marketing campaign from WCP | Wildlife Crime Prevention working in partnership with the Department of National Parks and Wildlife. The campaign’s creative partners are Adlab McCann and Giraffe Media Productions. This Is Not A Game is funded by the Lion Recovery Fund through WCP | Wildlife Crime Prevention and works with many other stakeholders in the field. It is the culmination of years of scientific work to better understand the illegal bushmeat trade in Zambia and its impacts on both people and wildlife