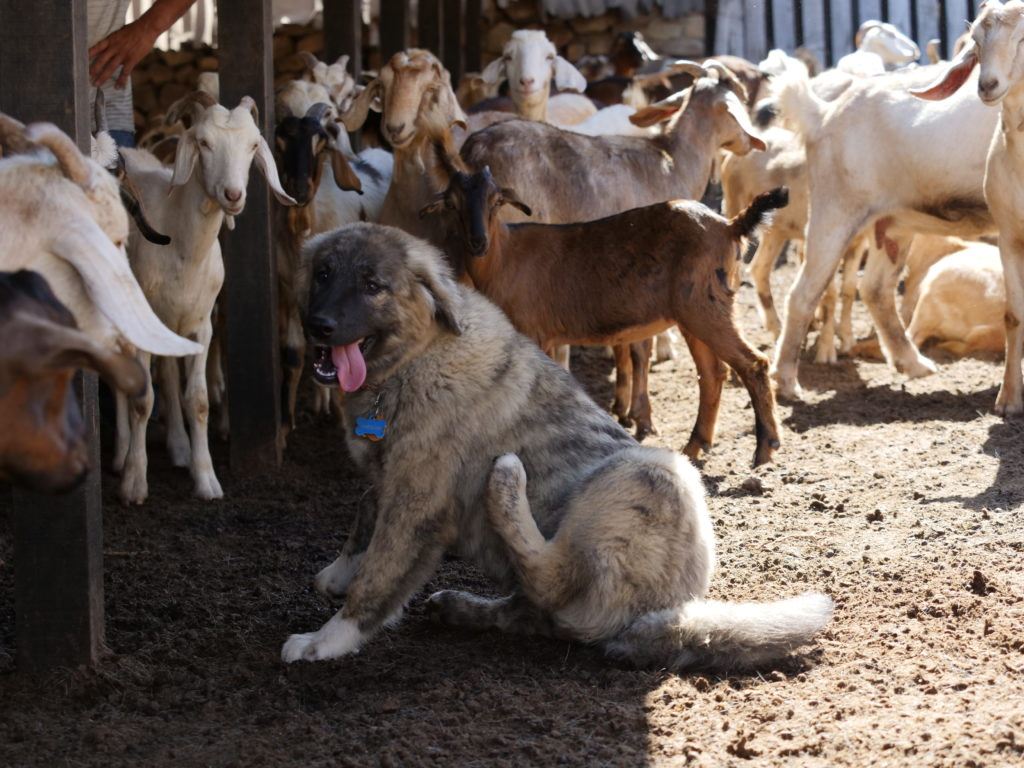 When an angry farmer gripping a shotgun yells, you listen. Jorge had lost his temper, but conservationists from Andean Cat Alliance (Alianza Gato Andino – AGA) were accustomed to working with upset farmers; they protect endangered Andean cats in “high conflict” zones where farmers typically loathe wild cats and try to eliminate them. There are less than 3,000 Andean cats in the world and saving them hinges on farmers’ support; so, when farmers yell, AGA pays attention and makes their concerns a priority. This is how they started working with Jorge.

Jorge’s farm is in Coquimbo, a narrow region of northwestern Chile where the Andes run closest to the sea. In just one year, he lost 100 goats—a sizable portion of his livelihood—to a series of mountain lion attacks. Jorge was angry with conservationists for protecting animals that could make a meal of his goats. That was three years ago, today he is the first farmer to participate in AGA’s livestock guarding dog program in Chile.

Just a bit heavier than a housecat, an Andean cat is far too small to kill a goat. They eat mostly viscacha, rather adorable bunny-like rodents. However, when bigger predators, like mountain lions, attack livestock then farmers seek retaliation against any carnivore they find; Andean cats are killed regardless of their guiltlessness. So, an important way to protect Andean cats is to help farmers safeguard their livestock from larger carnivores. When they can use trained dogs to protect their livestock, farmers no longer target Andean cats—this is how Jorge changed from adversary to pro-conservation participant in AGA’s livestock guarding program.

As Jorge and other farmers became involved, AGA had to then obtain a suitable breed of dogs for their program. Anatolian shepherds have excellent features and temperament for guarding, but are essentially nonexistent in Chile. Luckily, while studying for his Ph.D. in the U.S., AGA member Rodrigo Villalobos located a breeder with puppies in Oregon. Amongst the litter, Rodrigo found one who stood out as especially bright and affectionate, the perfect dog for Jorge. Though she was born thousands of miles from Chile, AGA fittingly named her “Andean”—Andean is now learning to guard goats on Jorge’s farm.

The human-wildlife conflict that AGA is addressing through their livestock guarding dog program is a major threat to wildlife around the world. WCN partners Cheetah Conservation Botswana (CCB) and Cheetah Conservation Fund (CCF) in Namibia have successfully solved conflicts between cheetahs and farmers for years through similar programs, so Rodrigo plans to visit CCB and CCF this spring to learn from their expertise. Through this cross collaboration, Rodrigo can take knowledge from Africa and adapt it to the Andes, ensuring AGA keeps livestock secure, farmers happy, and Andean cats thriving.