This blog is written by Gabriela Copoi, a visitor to Punta Islita Wild Macaw Reserve from January 2020

In March 2019, I booked my flight to Costa Rica to see what sustainable tourism was all about. I had heard about how Costa Rica was leading the way in respect to environmental policy, and was eager to see what they were doing differently. As my flight approached San Jose, I took in the view from the window and recognized how green this country really is. Despite flying into a city with a population of over 300,000, the wilderness seemed untouched. The airport was filled with images of clear water falls and the diverse plant and animal life that Costa Rica is home to. Although San Jose is like any other city, crowded and filled with fumes, it only takes an hour to reach the wilderness. The further away from the city, the greener it got. Valleys and mountains filled with rich forest, broken up only by small towns and agricultural areas.

Since childhood, I had an intense interest in wildlife. Family trips to visit my grandparents in South Africa gave me the opportunity to develop this interest beyond the standard British wildlife. Putting all my efforts into biology projects in school helped me realize that this was where I was going to go. I stepped into the world of animal conservation as I chose my degree. I went off to live in the center of a national park in Africa and study wildlife. With opportunities to learn about everything that goes into conservation, I learned that it’s not just about science, it’s about changing legislation and, more importantly, people’s perspectives. 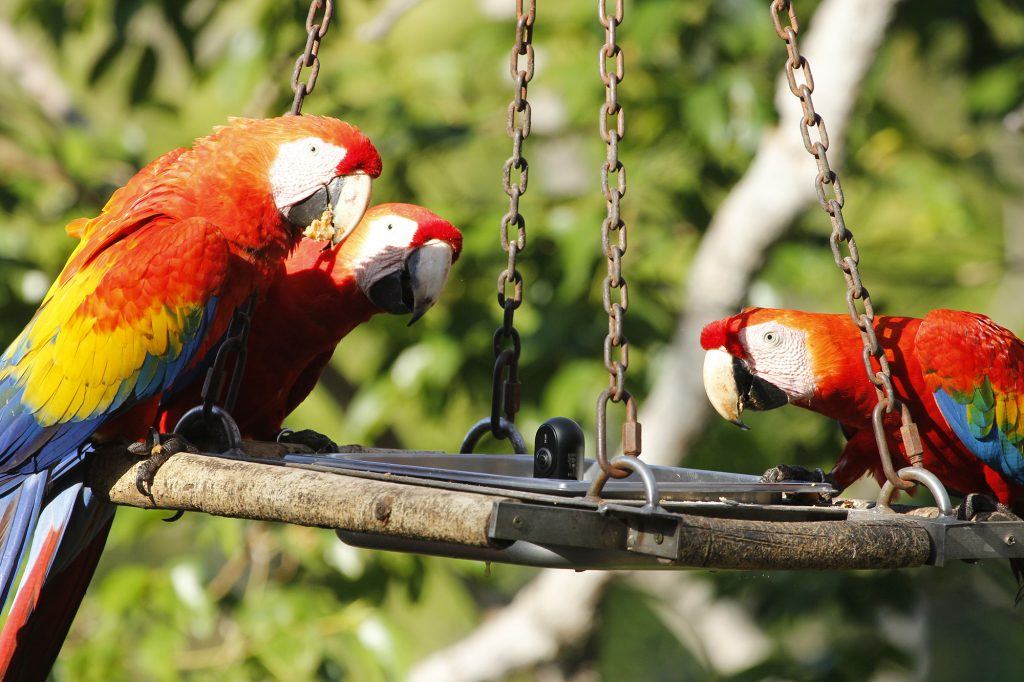 I headed towards Guanacaste, a unique dry forest environment. It remains incredibly green even in the height of the dry season, with underground springs and water systems keeping these forests alive. You can see from the amount of tourists here and the signs alongside the roads that it’s not about encountering the wildlife in cages, it’s about protected land and the mystery of the wild. Over 25% of Costa Rica is now protected land, and that percentage is increasing. But you can’t help but wonder, driving through these areas, which crucial animals are missing. For me, the most iconic wildlife that I wanted to see were macaws. These birds are unique to this part of the world, but why wasn’t I seeing them? I began to research this question, and the answer was unfortunately obvious. The worldwide problem of deforestation for agriculture has significantly fragmented macaw populations and habitat, while decades of illegal poaching for the pet trade have heavily targeted parrots for their natural beauty, intelligence, and elegance.

During my research, I discovered the Macaw Recovery Network (MRN), an organization recognized for incredible conservation work that is making a significant impact. They are targeting a variety of threats to macaws and reintroducing them in areas where they have gone extinct. The Nicoya Peninsula, along the northwest coast of Guanacaste, is one of those areas where the scarlet macaw had gone extinct around the mid-1900s. Since 2011, MRN has been reintroducing these birds in the Punta Islita Wild Macaw Reserve, re-establishing a population that is now thriving and breeding in the wild. Visiting this reserve was something I simply had to do. 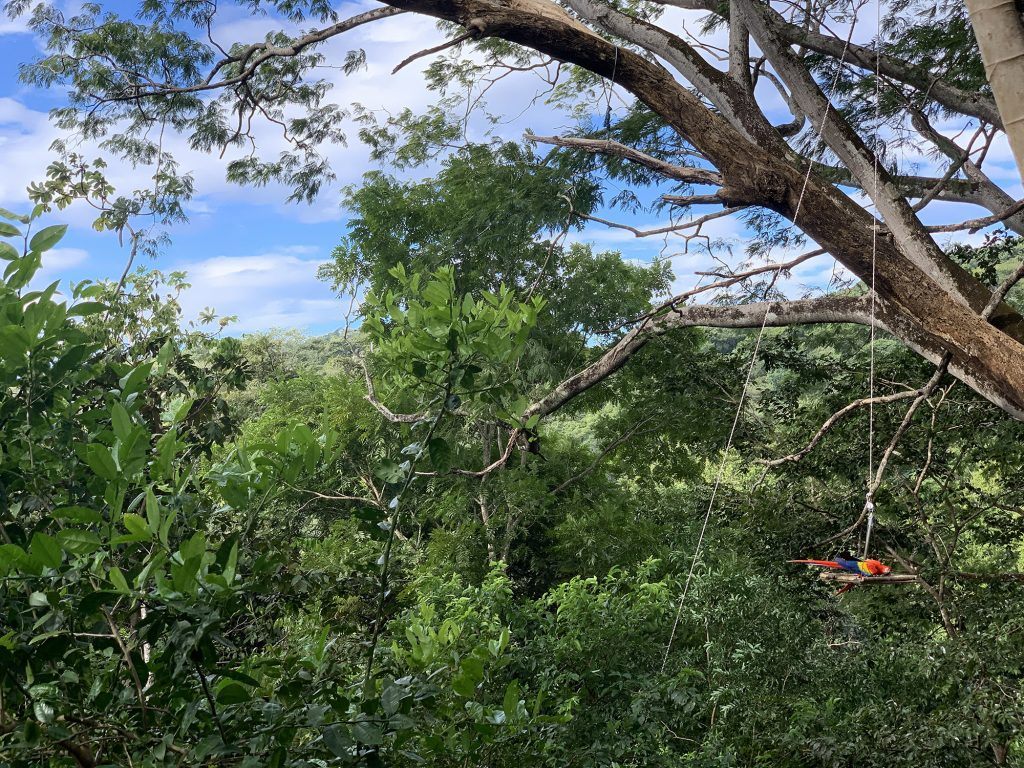 Through Airbnb, I found the opportunity to book the “Wild Macaws Up Close” experience with MRN. It was everything I was looking for: a real wild encounter, up close but not disrupting the wildlife in any sense. Every penny of my booking fee went straight back to help boost the macaw populations. I don’t think any tourist attraction could get better than this.

The experience was incredible! I learned an amazing amount about the macaws in Costa Rica, the problems they face in this country, and the current efforts to protect the future for these birds. For me, the highlight was the wild bird feeding. Although it is illegal to feed wildlife in Costa Rica, MRN has permits to do so. MRN’s feedings are an evidence-based method of soft releasing the birds back to the wild, to avoid newly-released macaws from starving to death while they learn about the availability of food in their new surroundings. This can sometimes take at least a year. During this point of the experience, you see the wild birds in their finest glory as they take flight from the trees and into the skies. From their vocalizations to the colors of their wings as the light catches them, each individual bird’s personality is visible during their interactions while at the feeding stations. Every moment was breathtaking and I was in complete awe to see these birds be truly wild. This feeding experience isn’t a tourism trick to provide a more exhilarating experience to make money. Everything that is happening at the project is for scientific reasons. 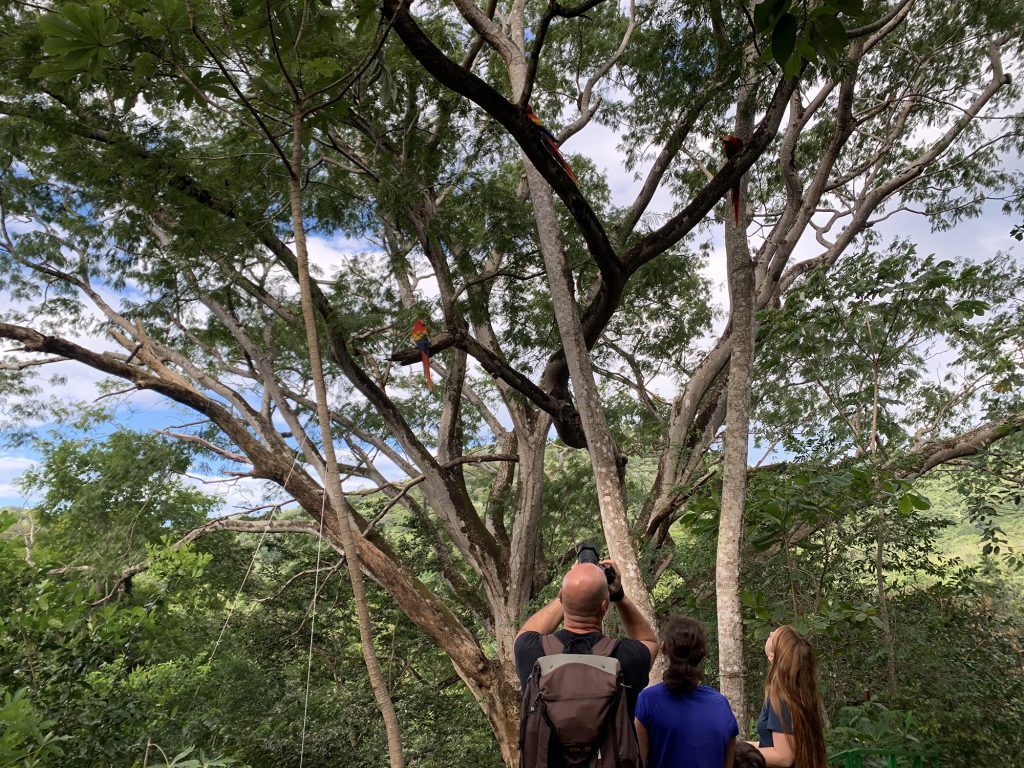 Visitors to the Punta Islita Wild Macaw Reserve have the unique opportunity to witness macaws feeding in the wild.

It’s truly a once in a lifetime experience to witness these birds in the wild, and to visit a project that is really making a difference. MRN is making history with each successful reintroduction of these magnificent birds into their natural habitat. They are one of the only organizations in Costa Rica working on macaw population recovery in a scientific way. They have huge plans to make a global impact not just for macaws, but for parrots throughout the neotropics. I cannot think of another organization I’d rather support as a conservationist!