A discrete camera trap placed near the water’s edge by the Niassa Lion Project captured this brutal confrontation between two hippopotamuses at a well-travelled trail in Mozambique’s Niassa Reserve. From the still image, it’s hard to say how this scene played out in its entirety, but given hippos’ reputation for aggression it was likely a tough brawl. Hippos generally fight their battles in the water and save their nocturnal time on land for grazing. Nevertheless, the open jawed “yawning” threat display by the hippo on the left is an indicator that it displeases him to see an interloper in his space.

As the third largest land animal (after elephants and rhinos), the hippo is a heavyweight force to be reckoned with and it’s no myth that they’re remarkably aggressive. A bull hippo leads a herd of several adult females and their young, as well as a few bachelors he will tolerate. As the dominant male, he has the right to mate with all the females in his herd, only sometimes allowing the subordinate males to mate with them, but for the most part the bull will defend his territory against the bachelors in his herd (and others from the outside) to the death.

When a usurper comes after a hippo’s territory, it can be a tense scene. The two dueling combatants will stand nose to nose, sizing each other up and bellowing a chorus of brays and snorts. They will open their jaws as wide as possible, 150 degrees wide, as a way to display their size and power as well as their sharp teeth. The hippos teeth tend to sharpen naturally through constant use throughout their life, and can grow to be up to three feet long, strong enough to slice and dig deep into the flesh of anything that gets in their way.

A smart hippo would retreat if he knew he was outmatched, and that is often the case within the hierarchy of the herd. But young bucks will get a little lovestruck when females are in estrus and the males become blinded by their own bravado. They start to think they have a chance at winning and ousting the leader. At that time, the two dueling powerhouses throw it down and duke it out. A full-grown male can weigh about three tons, nearly the size of two sedans, so when they begin crashing into each other, it gets noisy.

Hippos use their massive ivory teeth like weapons, slashing at each other with powerful, painful bites while swinging their giant heads around and knocking skulls together. A hippo’s bite can be as strong as 1,800 lbs. of pressure! That’s like a head like a block of cement with a mouthful of quick-slamming broadswords! The whole time, they bellow, and their loud, angry war-cries can be heard for miles. These aggressive battles can be bloody and violent, sometimes leading to death. Even for the victor, the battle leaves many injuries; there are not many elderly hippos without scars. 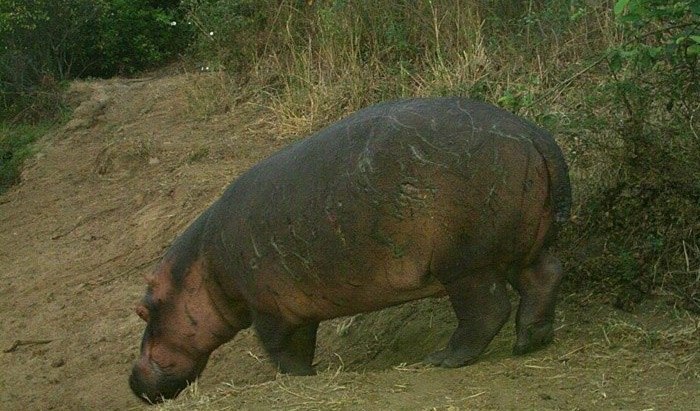 If a bachelor survives a fight with the alpha male and accepts that he’ll never win, he will move along to create his own herd. Unfortunately for hippos, this is getting more and more difficult as their habitat has been greatly reduced by humans. Dams and water diversions for agriculture can take the river right out from under hippos who need it to survive. For a semi-aquatic animal that spends hours in the water to cool off (their name literally means river-horse in Latin), this can be a disaster.

The overlap between the human and the hippo population is a serious matter. The aggressive nature that has helped hippos survive for millions of years will often lead to human-wildlife conflict in our modern era of boats and farming. A male hippo protecting its freshwater territory through a long stretch of river will not hesitate to viciously attack any invaders it sees as a threat, even if it’s just an unsuspecting visitor cruising down the river on a raft or a farmer protecting their crops from the hungry beasts. Even a female can get violent if something or someone gets between her and her calf. Their ivory teeth have also seen them get embroiled in the same global poaching crisis that elephants are facing today.

Actions are being taken to protect this powerful pachyderm for future generations. Hippos have been a popular attraction at zoos for decades, educating the public about this exotic species and garnering support for their wild counterparts. Currently listed as Vulnerable, many hippos are found in protected areas in their native habitat such as national parks, forest reserves, and sanctuaries. Hippos generally breed easily, so with increased protection, hippo populations have a strong chance at recovering in the future.