Tracking the Ghost Cat of the Himalayas

The high Himalayas are a challenging place for most species to call home, let alone the researchers who study snow leopards in the farthest reaches of these majestic mountains. As you’d expect, snow leopards are a difficult species to study. Usually, researchers are only able to capture images of this shy cat through the help of motion sensing or infrared camera traps. To give you an idea of how rare it is to encounter a snow leopard directly, the species lives in a home-range roughly the size of France, Germany, Italy, and Spain combined. They can be found in 12 different countries, across 463,000 to 618,000 square miles. With only 4,500-7,500 snow leopards left in the wild, this species is incredibly well hidden in its Himalayan kingdom.

As the name suggests, snow leopards live in an environment of snow covered mountain tops, but it’s their gravel-colored camouflage that helps them keep to the shadows and blend into the backdrop of jagged rocks and cliff sides perfectly. If their natural gray color and rosette pattern isn’t enough to make them disappear, the dirt and dust of the landscape tends to kick up and cover their fur to give them an extra layer of protection.

Snow leopards have a long list of other physical adaptations that also help them to thrive in their environment. Their wide feet work as snowshoes, spreading out the snow beneath their feet as they step, and making it easier for them to keep their balance when running and leaping from rock to rock, especially when chasing their prey—most commonly the blue sheep, or bharal. Their long tail works as a counter-balance to keep them from slipping off rocks and sliding down the mountain side. It also makes for a useful scarf for them to wrap around their faces when it gets too cold!

Like most cats, snow leopards are incredibly shy animals and prefer to keep their distance from people.  Despite living in a landscape that is mostly inaccessible to humans and being almost impossible to spot with the naked eye, the snow leopard faces its own set of inherent dangers that threatens its survival—unfortunately, most of these threats are man-made.  The human population continues to grow in areas near snow leopard habitat, and their contact with wildlife is becoming more and more prevalent. Conflict between people and snow leopards arise as herders protect their valuable livestock from attacks or seek financial gains in the illegal trade for snow leopard fur, bones, claws, and other body parts. Besides direct conflicts with humans, snow leopards also face threats of habitat degradation. Livestock can strip bare what little grass there is and leave no time for new grass to grow, which affects the productivity of the soil. Habitat fragmentation from roads and mining are turning the land snow leopards need to roam into a broken mosaic. The effects of climate change are also starting to show in the mountaintops. Temperatures in their normally chilly home have risen and forced the snow leopard to move higher up where the vegetation is scarce and unfortunately, their ungulate prey has not followed.

Our partners at Snow Leopard Conservancy (SLC) are experts at monitoring this elusive cat; their experience comes from decades of seeking them out in the field. Snow leopards may be hard to see but they leave behind signs that reveal their location. Our partners use this information to think like a snow leopard. They follow the clues left behind by scrapes (claw marks left on the ground when snow leopards scuff the ground with their back feet), scat and urine, scent-sprays, and pugmarks (footprints).  Once they have narrowed down where the snow leopard’s tracks lead, they place remote camera traps in those areas and surrounding locations to capture images and study the snow leopards further. With modern digital technology, a single camera can continuously record both sides of a snow leopard as it moves. Scientists can then use this footage to note down the cat’s unique spotting pattern and use it to identify that same cat in the future. By comparing the footage to other records, they can also determine if there is more than one snow leopard in the area or if it is one that has been seen before. 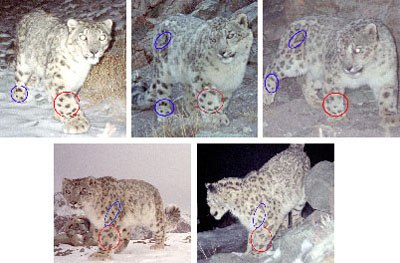 By examining a snow leopard’s distinctive rosettes (markings), researchers can determine if this is cat they’ve recorded before or a new one. Photo courtesy of Snow Leopard Conservancy.

Snow leopards are not easy animals to study, but with patience and commitment, Snow Leopard Conservancy is working to ensure that this spectacular ghost cat will continue to prowl its mountain home for many generations to come.