Peter Blinston is the Executive Director of Painted Dog Conservation (PDC). Here he shares the latest update on the Mpindo Pack. Read previous updates about this pack here and here.

Painted Dog Conservation relocates the Mpindo pack off communal lands for the first time in June 2018.

Many of you will have been following the story of the Mpindo pack, which has been featured in our newsletters since June 2018. This small pack of just two adults (Snow Tail and Jonathan) and their pups have illustrated the challenges we face on the front line of conservation, where pressure for space to live, leads to human wildlife conflict situations that require mitigation and decisive action.

To recap: The Mpindo pack denned deep inside communal land in June 2018. The community responded very positively, tolerating the presence of the pack and the subsequent loss of livestock until we were able to capture them at the most opportune moment. 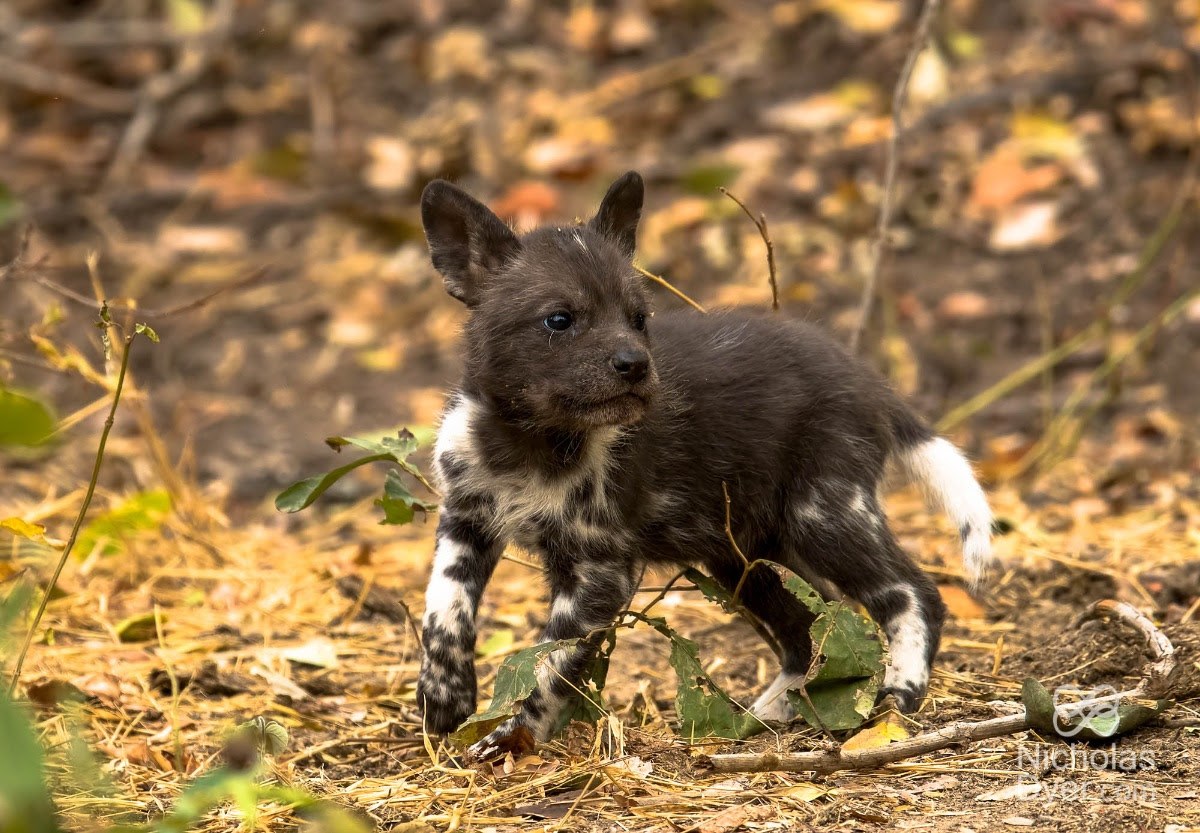 The pack was relocated to PDC’s Rehabilitation Facility before being released back into the wild.

We housed the pack at our rehabilitation facility for six months before releasing the pack back into the wild. Unfortunately, it only took them a couple of months to find their way back in the same communal land. Our presence and dialouge with the communities again ensured that the dogs remained unharmed while we waited a few months for the best time to capture them.

This second capture was undertaken in June this year and we again housed the pack at our Rehabilitation Facility, while we now considered alternatives for their eventual release back into the wild.

And so, Chapter Four of the Mpindo “Dog’s life” unfolded recently. 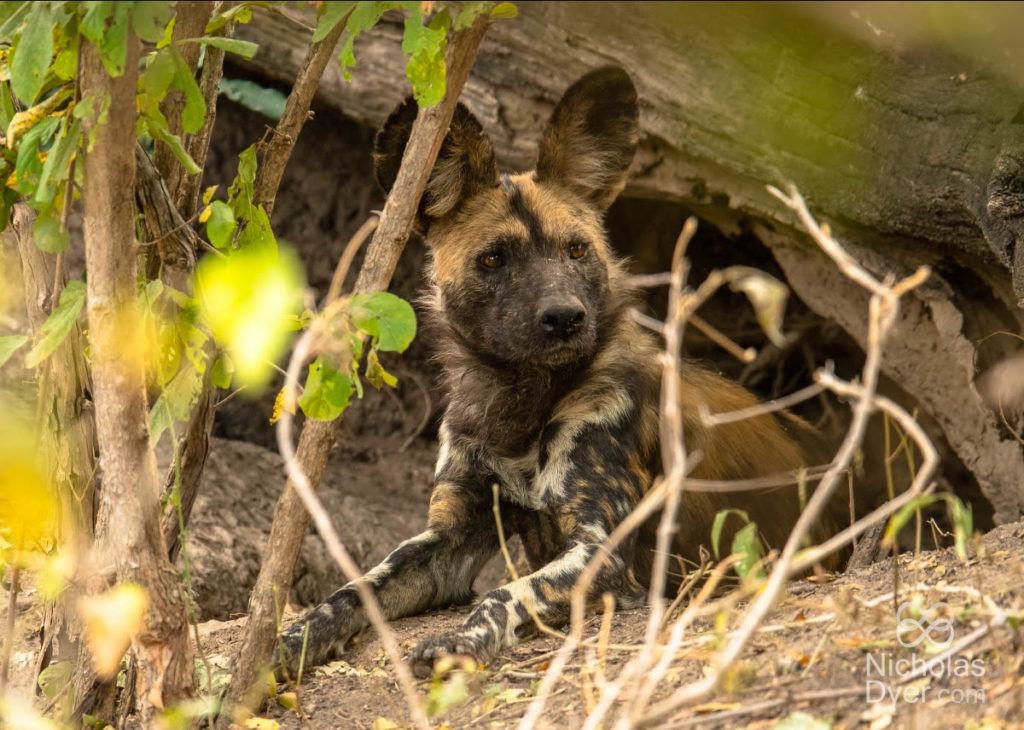 Once released the pack unfortunately found their way back to the same communal land, an area not safe for the dogs.

Our work in Mana Pools and the wider Mid Zambezi Valley has been progressing steadily over the past ten years. In that time, we have seen the population steadily decline due to ageing alpha females, conflict with lions and hyenas, and possibly undesirable pressure from tourists, whose enthusiasm to see the painted dogs at times comes at a cost to the dogs.

This decline in the population is likely only a temporary situation, however it presented us with an opportunity to find a new home for the Mpindo pack in a place far from human settlements. However, we needed help. Firstly, from Zimbabwe National Parks, who quickly issued the permits required to move the Mpindo pack and from our partners in the area, Wilderness Safaris. We knew the scale of the task ahead of us and knew that we needed a committed partner on the ground who could help us not only get the Mpindo safely to Mana Pools but also manage the ongoing logistical task of feeding them…… for at least six months. 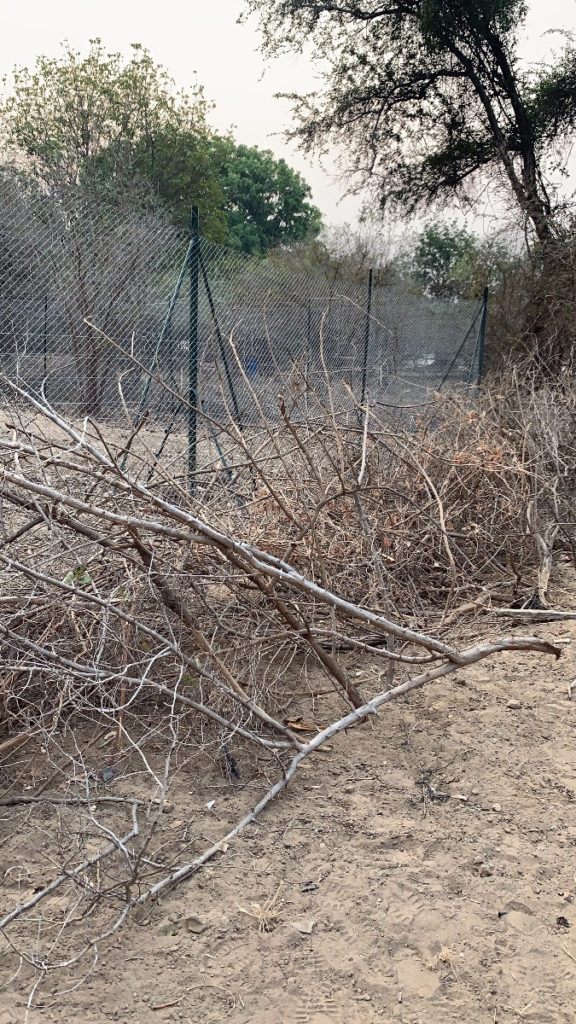 The pack ends up at PDC’s rehabilitation facility for the second time while plans are made to eventually release the dogs in Mana Pools.

The first task was to build an enclosure to hold them because we knew we could not just take the pack their and release them. All the wisdom pointed towards the need to hold the pack for six months or more in the area we hoped they would stay. Put simply, the longer we hold them in Mana Pools, the more likely they are to forget about their communal land home outside Hwange NP and accept that Mana Pools is their new home.

For this we needed to find a site and construct an enclosure to hold them. Wilderness Safaris offered their camp infrastructure at their Chikwenya Camp, on the banks of the Zambezi River, and we gratefully accepted. Our team constructed the enclosure and during that process we discussed all of the logistical needs with Wilderness Safaris for caring for the dogs until we were all happy that everything was in place. 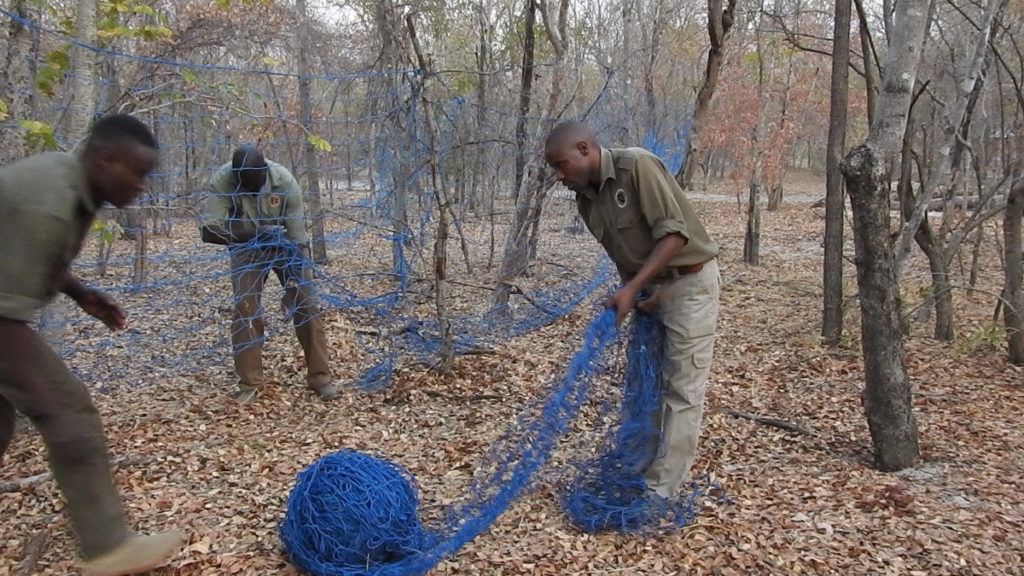 PDC staff sets up capture nets within the enclosure as they prepare to move the pack to Mana Pools.

Now we had to capture and move the dogs from our Rehabilitation Facility in Hwange to Mana Pools. I didn’t want to drive the 18 hours, on rough roads and asked Wilderness Safaris for a plane, which they provided without hesitation. 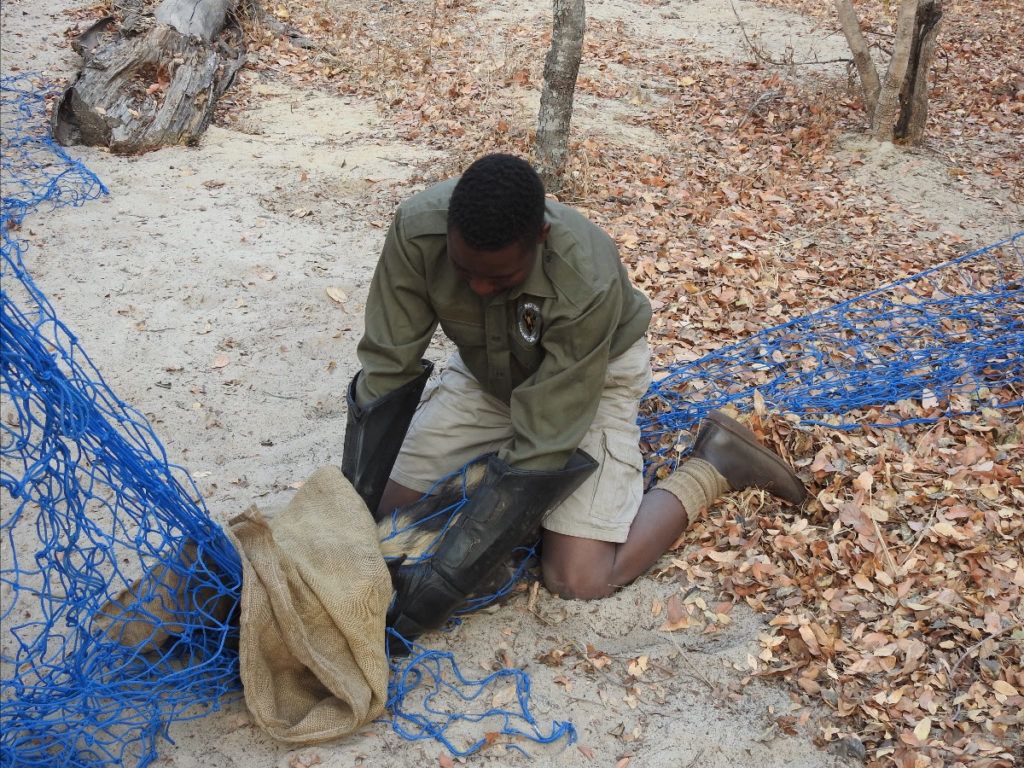 Due to the pups small size, their capture required no need to tranquilize them.

I knew the capture would be straightforward for us. It’s something we have done many times before and with appropriate planning it’s not difficult.  We set up capture nets in the enclosure adjacent to the one holding the dogs and then open the gate between the two. The dogs run through the gate and get caught up in the nets. We grab them, firmly but gently, covering their heads and quickly administer a tranquilizing injection. There is no need to tranquilize the pups, they are small enough to just grab carefully. 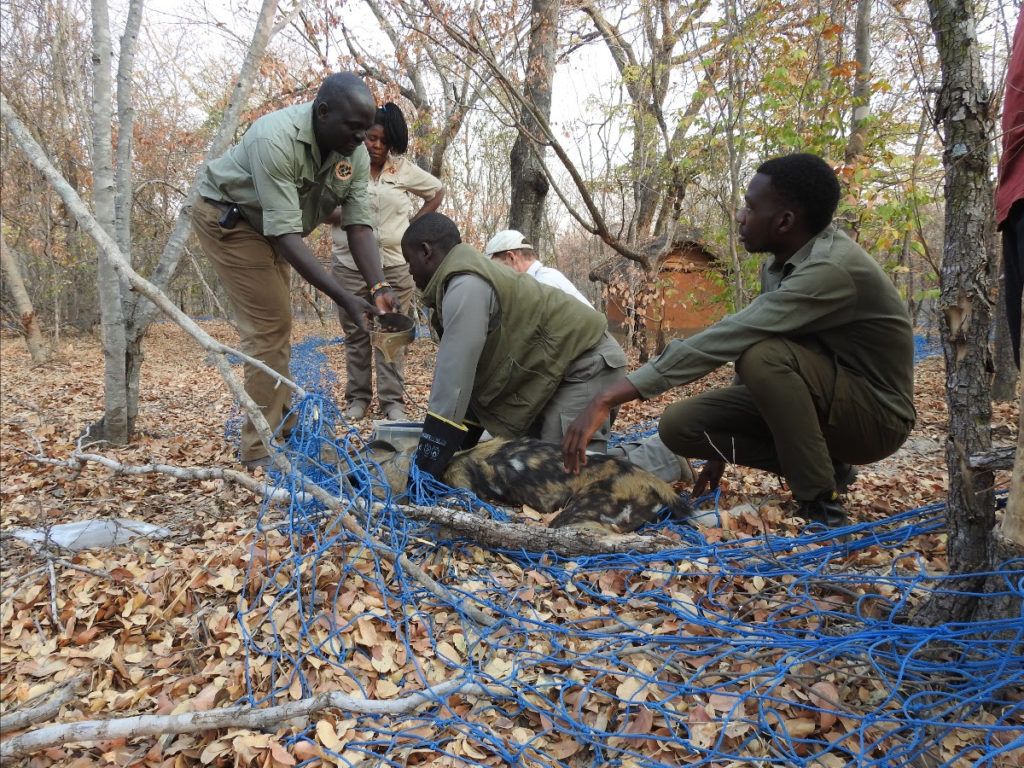 Experienced staff like Jealous and Washington teach new students and office staff how to safely capture the dogs.

“Old Pros” like Jealous and Washington, with new students and office staff like Maria, are all involved. 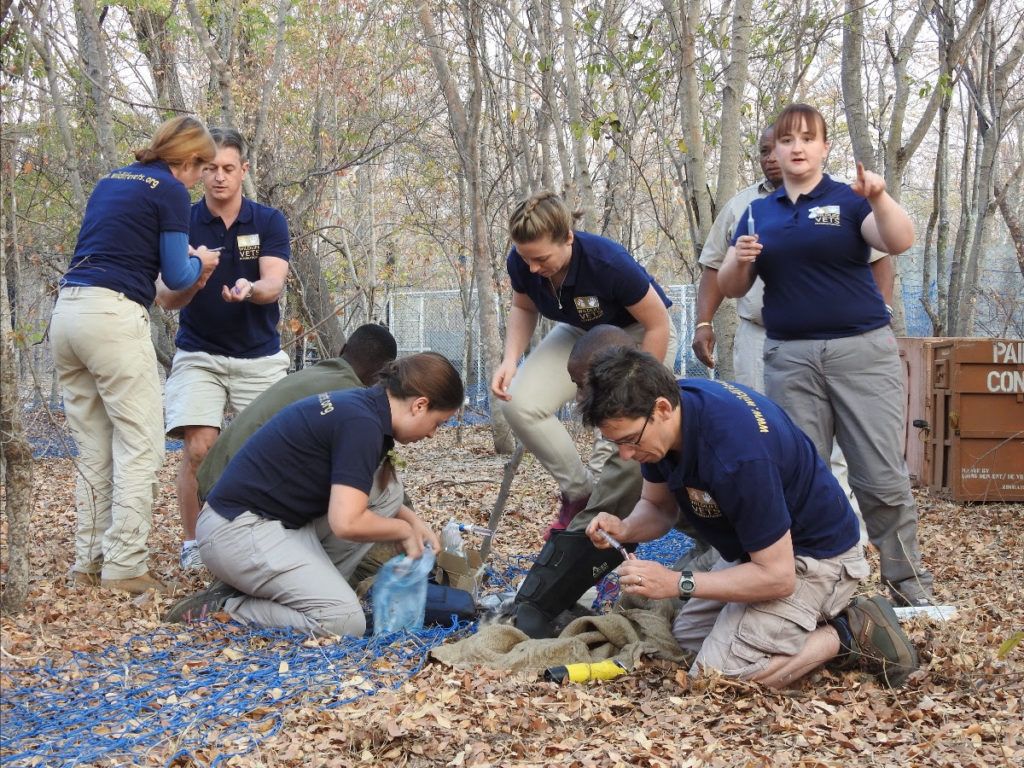 Veterinarian staff were on hand to help.

In this instance, we had the vets from Wildlife Vets International on hand, the veterinarian staff from our local government vet offices, as well as Dr Barbara Ferreira. 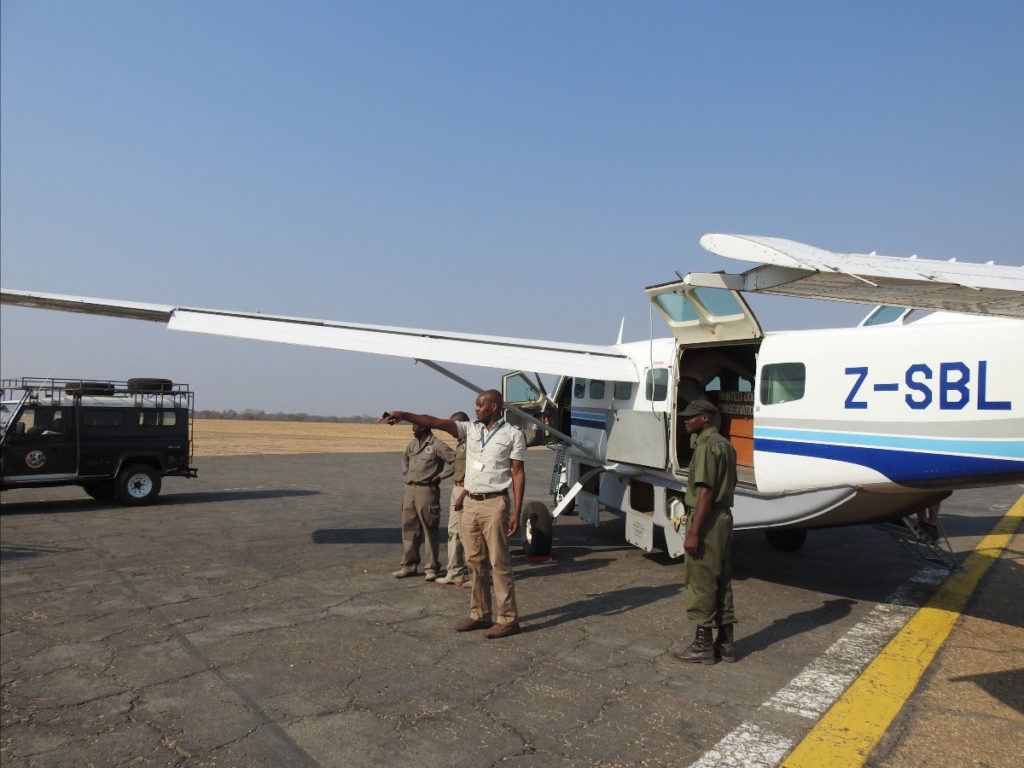 To avoid the stress of a long drive, PDC flew the pack to Mana Pools.

Samples were taken and the dogs quickly processed through and put on the plane for the hour or so flight to Mana Pools. 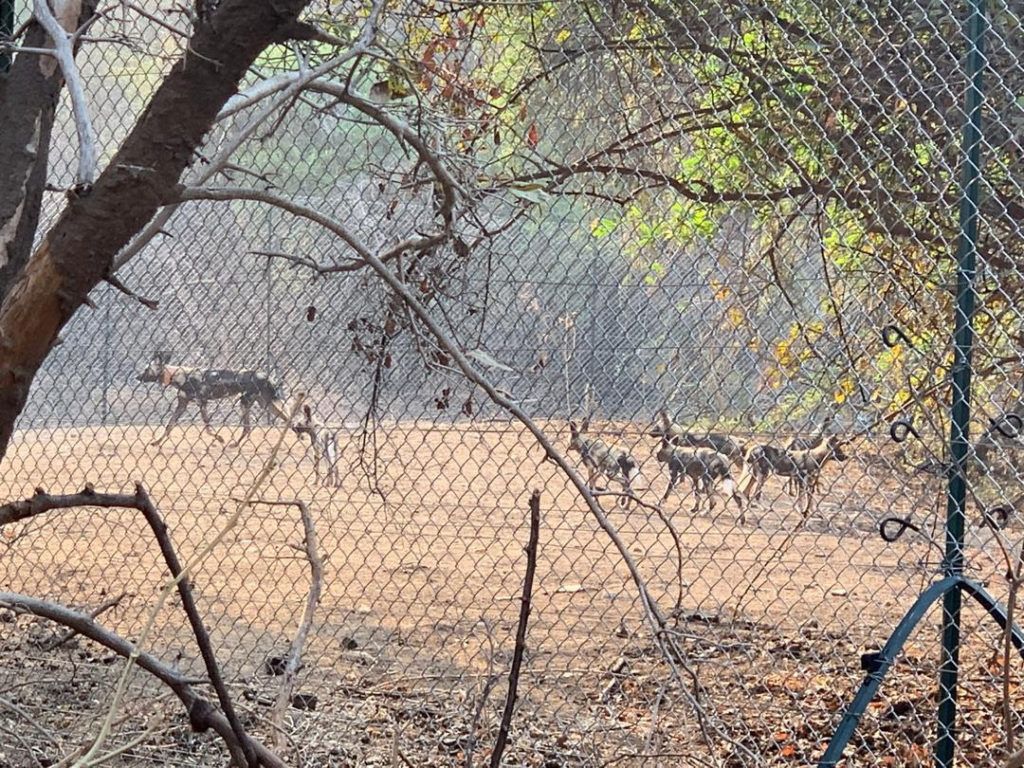 The pack is safely in their new enclosure in Mana Pools.

It was as smooth as could be. From the dogs being caught in the nets to being released into their new “home” at Chikwenya took just four hours.

Our team is in place in Mana to care for the dogs and Wilderness Safaris are providing all the support we need to ensure the dogs well being is taken care of and they are thus settling in well.

We will release them into Mana Pools in April 2020. 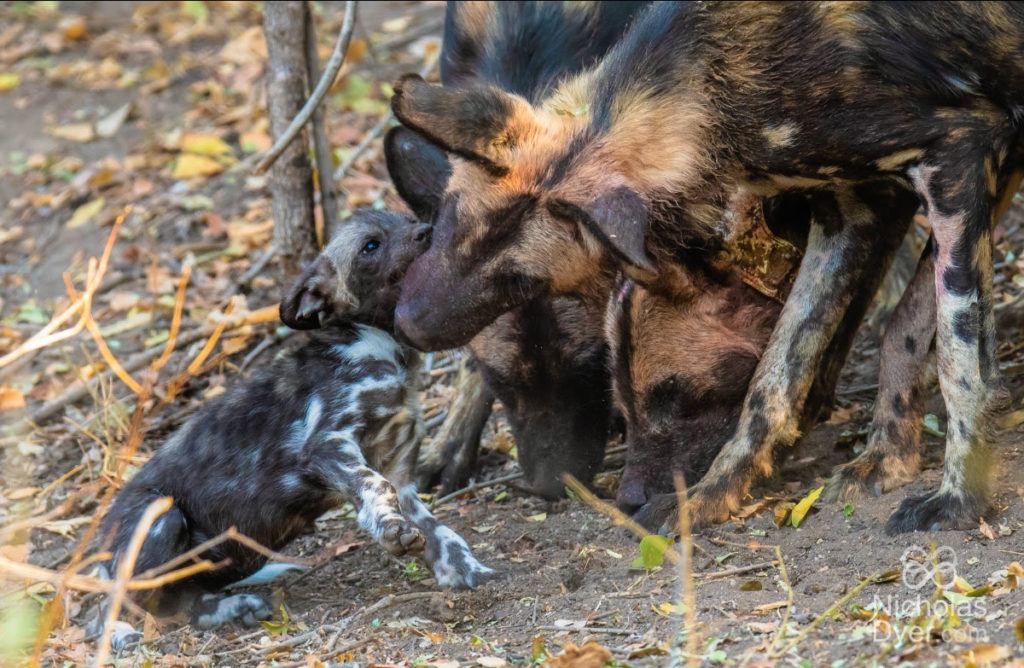 The pack will stay in the holding enclosure until April 2020 when they are ready to be released into the wild.

It’s the support we receive from you that enable us to take on these seemingly impossible tasks without hesitation.

We can never thank you enough for your tireless commitment and support.